Persona 4 was originally released for the PS2 in 2008, with a Golden version being released years later for the PS Vita. Now, Persona 4 Golden has a PC port that you can jump on today. If you missed the Golden version of this game, maybe due to its release on a contentious portable system, it’s more or less a completely new game. This is partially due to the influx of new features, and partially due to all the RPGs you’ve played since Persona 4 first hit the scene all those years ago. All of this is to say that you’ve almost certainly never played this game, and you absolutely should. James, Paul and Rhett of our Press X to Podcast Crew discuss the latest port of Persona 4 Golden in the video below: Hit play, you won’t want to miss it!

Persona 4 Golden has reams of content to differentiate itself from Persona 4. There’s new dungeons, new Social Links, new endings, new Persona, new events, new cutscenes, and new areas to explore. They also implemented that helpful difficulty slider in this version. On the other hand, the properly new PC version has less to offer. There are Steam achievements, an unlocked frame rate, better resolution support and more control options. In other words, if you’ve played Persona 4 Golden before, there’s little incentive for another run through the game.

While everything has been cleaned up and coded for proper size screens with many more pixels, the bones cannot be concealed. It is, after all, a PS Vita port, which is itself a port of the PS2 version. As long as you’re in battle or a cut scene, you don’t even notice. But once the fighting is done, the game world looks quite dated. 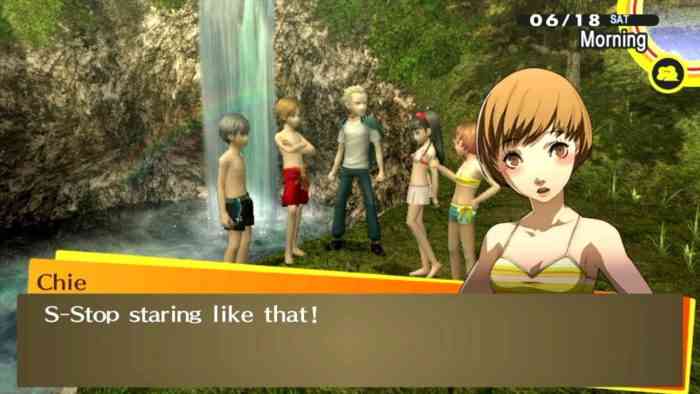 To read our full review of Persona 4 Golden on PC, click here, and don’t forget to visit the comments section below to tell us your thoughts on this new PC port.

SaGa Frontier Remastered is A Beautiful Nostalgia Trip
Next Watch Us Unbox The SpongeBob SquarePants: Battle for Bikini Bottom – Rehydrated | F.U.N. Edition
Previous The 10 Best Games of 2020 So Far…