Wuppo. Say that word to yourself a few times. Wuppo. Wuppo. It’s a fun one, no? It’s a word built of childlike whimsy, and in that sense creators Lars Korendijk & Thomas de Waard couldn’t have chosen a better name for their debut title.

Wuppo has been an ongoing labor of love for something like 7 years which is a crazy long time to work on, well… anything. These guys committed hard to this idea all those years ago and like a whale, Wuppo is finally breaching from the deep ocean of their imagination. This whale metaphor just struck me and it makes more sense than it should, so I’m stickin’ with it. Wuppo is a whale of a game in a lot of ways: It’s huge, it’s weird, and it’s hard not to love it (find me a person that doesn’t love whales and I’ll find you a person who’s dead on the inside).

Wuppo is first and foremost a Metroidvania game, but where those tend to have large combat components, Wuppo deals mostly in peaceful exploration of its strange and bustling world. It leaning on it’s adventure and creativity will leave some gamers frustrated, but Wuppo is not interested in trying to be something it isn’t.

“The story is good enough and it’s told in a sharp Mario RPG style but the devs know better than to dump tons of exposition on you up front.”

Everything starts off with your forceful eviction from a live-in hotel where it turns out you’ve been a pretty lousy tenant. Between pestering the manager incessantly and being a really messy eater, people have had enough of you and want you out. And so begins your adventure to find a new home. I appreciated the way Wuppo drops you into it rather abruptly. The story is good enough and it’s told in a sharp Mario RPG style but the devs know better than to dump tons of exposition on you up front. You’ve been kicked out and you need to find a new home. Go. If lore is what your body craves you can collect filmstrips that are scattered around the map that serve to fill in the story of the Wuppoverse. I can’t honestly say that this is the deepest and most interesting story, but it’s cohesive, weirdly vast, and they stick to their vision. 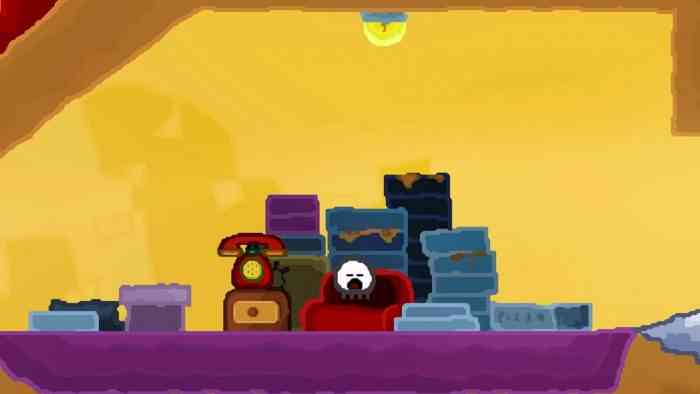 Don’t be fooled into thinking Wuppo is an action game. It’s primarily an adventure game that has some platforming and combat. The platforming usually manifests between cities or hub areas and they do a nice job of cleansing the palate of the mostly straightforward adventuring bits. These in between platforming sections are also where the many boss fights will crop up and I have to hand it to the devs, a number of these battles are actually some of the better ones I’ve ever played. They’re oddly inventive, challenging, and nicely animated. Challenging is worth highlighting.

It’s actually kind of jarring when you come up against the first difficult boss fight. You’re doing your thing, exploring the world and collecting hats when BAM! All of a sudden you’re fighting this giant Ice Cream abomination that barely takes a lick of damage and has mean attack patterns. At times these encounters might swerve into the frustrating category, but once you beat them the sense of accomplishment you’ll feel is palpable.

” I have a hard time calling the art style good exactly, but it isn’t bad either.”

The art style they went for with Wuppo is pretty interesting. It’s got a hand drawn look where everything squiggles with a few extra frames of animation. I have a hard time calling the art style good exactly, but it isn’t bad either. It’s simple and crude and looks like a child’s coloring book. The art style is entirely cohesive and fits their vision. It just works, and there’s so damn much of it. You’ll travel through dense jungle, underground caves, and cities humming with weird technology and shady characters. The variety is staggering and made even more so when you realize that everything was drawn, animated, and programmed by one guy. One guy!

The other half of the team was dedicated to music, and he held his end up of the creative bargain as well. The music isn’t especially flashy or catchy, but it serves the vision of Wuppo well. It’s light and whimsical when necessary but can also pull off bombastic and frantic during an especially crazy boss fight. 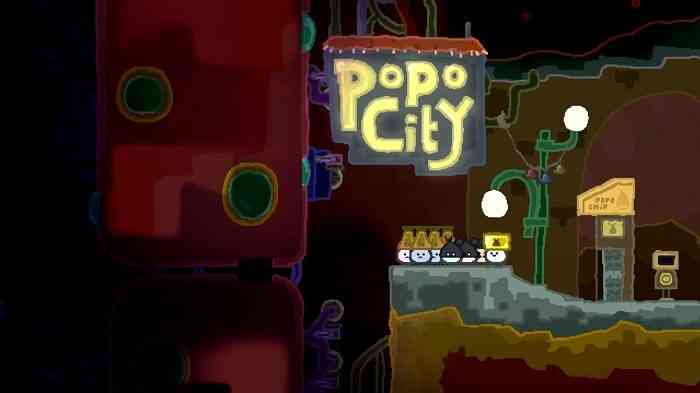 I can’t imagine that anyone would be blown away by any one part of Wuppo. The art is wonky, the combat is simple, and the lore is kind of silly. But it’s when these aspects combine that Wuppo’s charm begins to appear, and it’s a charm that can’t be stifled by any flaws. The guys over at Knuist & Perzik built a world and gave it life. They poured their hearts into this weird little indie and took a risk. Lucky for us it just so happens they also made a really neat game. 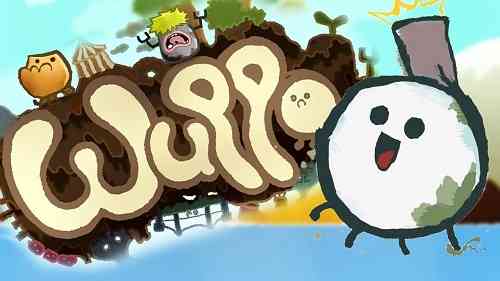