Visual Novel Maker – Making The Most With What You Have

From Degica Games, the publishers of the well-known RPG Maker series, comes a different “Maker” title known as Visual Novel Maker. Rather than allowing players to make a full-fledged RPG, players are given the tools to create their own visual novels. With visual novels beginning to gain more and more popularity here in the West, it is definitely a good time to have brought this engine.

While not exactly a game, Visual Novel Maker allows players to utilize their tools in order to make their own games. Unfortunately, the software does not have an interactive tutorial which surely would have been very useful. Alternatively, the game does feature a “help section” in lieu of a dedicated tutorial that allows players to read up on topics such as Easing Effects in Scenes or Setting Up a Test Bed. Though I hesitate to say that the software is beginner friendly, there are definitely tools out there for people to learn and make the most out of the software if they are willing.

Much like the RPG Maker series, Visual Novel Maker provides the tools, but it is up to the creators to learn to make the most out of them. Likewise, the game’s packaged assets are severely lacking, and outside of utilizing them for testing purposes, would likely make most projects look and feel quite similar. This means that DLC and user-generated content will be essential for players to create unique projects. Whether that means utilizing more free assets or creating your own is up to the creators. 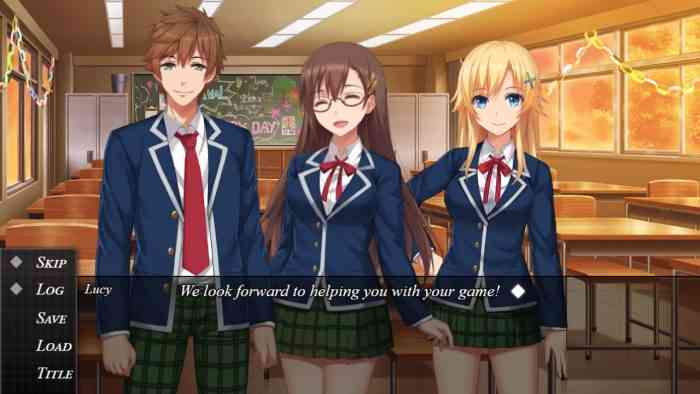 Once the players have a better sense of the software and its uses, Visual Novel Maker proves to be very flexible and easy to use in some manners. For example, dragging and dropping avatar positions is easy to do, and determining how the background music begins at what volume is straight-forward as well. Like other game developing software tools, Visual Novel Maker is what one makes of it. If the RPG Maker series provide any idea on the projects we may see from this title, I believe that there will be some very unique, creative games that are sure to gain some attention.

While the software is flexible and can be deeply customizable, knowledge of programming will be required in order to open up the software to customize your creation the exact way you want. Without these skills, players will have to make the most out of the software until they do so. Within the game’s tools, however, there are some minor pages that provide knowledge regarding some simple scripts to incorporate into your projects.

“While jumping in can be scary at first, learning the various tasks one-by-one is likely the best option for new players.”

Lastly, the software’s UI definitely requires improvement. While the UI can be learned by users, it is a bit cluttered and messy to new users. Some of the icons do not indicate their use or function, and users will be required to check out the help pages in order to find out what they do. Just like the software as a whole, the UI is a bit daunting at first, though over time should become second nature to those who put in the time and effort to learn.

Overall, Visual Novel Maker is a solid piece of software that allows creators freedom to make what they want, provided that they have the skills in order to do so. While jumping in can be scary at first, learning the various tasks one-by-one is likely the best option for new players. With a strong programming base, the game opens up to players; however, without prior experience, players will be left to learn almost completely on their own. With the RPG Maker series resulting in some impressive and unique creations, we anticipate that Visual Novel Maker will result in similarly pleasing projects.