I really like city builders. It probably comes from my early days of playing strategy games like Starcraft, Age of Empires, and Heroes of Might and Magic. Balancing out resources and spending, trying to eke out every little bit of efficiency is a never-ending task that is surprisingly fun because you feel like you can always do better.

But at the same time, I understand that many people out there are very interested in city builders for their aesthetics. Designing beautiful streets and laying out the architecture is satisfying in its own right. The problem is that many people are turned off by the spreadsheets and the overcomplicated economy behind it all. This is where Tinytopia comes in, a game where creativity is emphasized over strategy, which makes for the perfect introductory citybuilder title.

The thing that really sets Tinytopia apart visually is that everything is a toy! Buildings, trees, the environment, and even the people are little toy blocks that you arrange on your board. It really takes that childhood fantasy of creating your Lego town (which, in all honesty, is what city sims are) and turns it into a full game!

The toyful-ness of it even has a gameplay impact as well. Just like you did with your Legos, you can stack buildings on top of each other, creating monstrous custom buildings only you could have thought of. But be careful! There is physics at play, and if you don’t balance your structures out, or provide them with enough support, it will come crashing down in spectacular fashion. This aspect is, in my opinion, the best part of Tinytopia. From artistic freedom, to challenging yourself to build the craziest tower possible, it provides the game with so much fun and player expression. There are even challenge levels all about crazy structures, such as trying to build a city on a rocking see-saw, making sure you are balancing both sides of the scale. 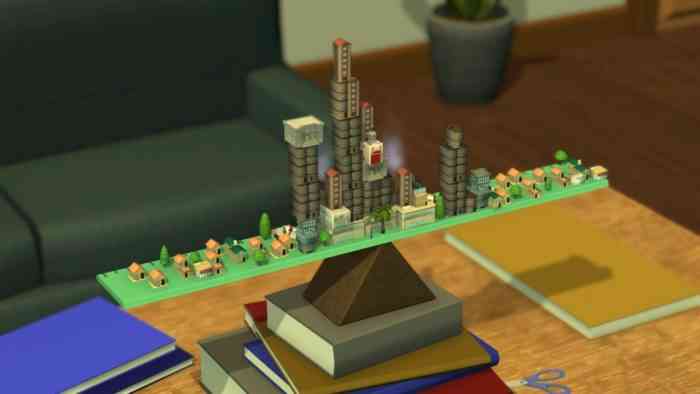 We also can’t forget about toppling it all down, which was probably the only good thing about having to put away my toys. There are so many ways to bring chaos into your city too! Meteors, earthquakes, tornados and so on, you could even use them to see if your city could withstand these natural disasters. Or even more fun, you can summon Godzilla or Aliens to wreak havoc, where you can even place down defences to see your toys trying to fight off the invasion. At the end of the day, you can simply just push over a building to watch it all go down like dominos too.

The economy and logistical side of Tinytopia is, as I mentioned, very easy to comprehend. Mostly working off of a checkmark system, you just have to make your all your citizens are provided with jobs, electricity, healthcare, and security by placing the respective buildings around their homes. Resource side, all you need to worry about is money, and making sure you are making more through taxation (which is your only income) than you are spending on keeping your facilities running.

It feels like the game was really built for players new to citybuilders. It does teach some of the basic fundamentals, like checking heat maps and making sure you are squeezing as many people as possible within the ranges of your facilities. For experienced players, i’s quite easy to do, and once your city is on its feet, you will have money flowing in faster than you could ever spend. At times it does feel like busywork since it doesn’t really take much thinking or planning, but you do have the option to turn it off if you are playing in sandbox mode. 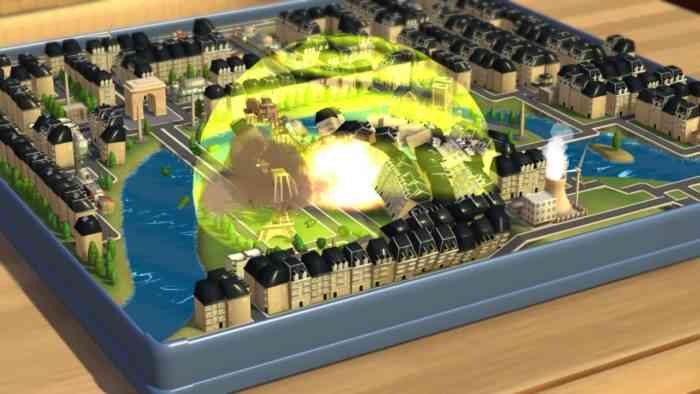 I do feel like there is a bit of a missed opportunity here though. I was a little disappointed that emergency buildings didn’t have an upper-range, as in that you could have a massive tower and a tiny doctor’s office on the first floor could take care of everyone above it. Since there is so much fun in stacking structures in this game, it would be interesting having to manage citizen’s needs a hundred floors up. I just wanted to create my own dystopian mega-structure and simulate it, is that too much to ask? Probably.

When it comes to the easiness of it all, even balancing the numbers to be harder as you player later scenarios could have added some challenge. It would also open avenues for the new players to get better at the more intricate parts of city planning. Or even a good-old difficulty setting to keep it interesting for older players.

I think Tinytopia is a great game for younger audiences, especially ones interested in dipping their toes into citybuilder games. Fun, creative, and full of destruction! However, for veteran players looking for a new, complex system to dive into, I’d definitely look elsewhere.


Redout 2 Review – The Fast, the Furious and Frustrating