Thronebreaker: The Witcher Tales Review – A Tale to Remember

I’m not usually one to get sidetracked by minigames set within larger open worlds, but that all changed when I first played through The Witcher 3. I spent hours upon hours playing Gwent, the card game within the Witcher universe you can have Geralt play in his spare time, fully absorbed by its simple-yet-addictive card play. It didn’t surprise me, then, when CD Projekt RED decided to expand Gwent, initially into its own online multiplayer platform, into an entirely new game with the cards as its core gameplay mechanic. Enter Thronebreaker: The Witcher Tales, a compelling RPG that uses Gwent in smart ways to convey the strategic and unpredictable nature of a battlefield.

Thronebreaker takes place in The Witcher universe, but don’t expect to be running around as Geralt or another witcher hunting monsters for townsfolk. Instead, Thronebreaker focuses on Meve, the fierce warrior queen of Lyria and Rivia who is hellbent on taking down the Nilfgaardian army no matter the cost. Unlike previous games where you fall in a relatively neutral political alignment as a witcher, Thronebreaker plants you into a much more defined perspective. That being said, there is still an overwhelming amount of choices you must make throughout the campaign that drastically shape its outcome. A central theme in Thronbreaker is the concept of the lesser of two evils. In fact, every time you make a significant dialogue choice, the game says, “you have chosen one evil in favor of another.”

In war, there typically aren’t many clear-cut “correct” choices, and a decision to help one group will almost certainly lead to the harm of another. This is brilliantly represented in Thronebreaker, and each choice I made had a direct impact not only on the story, but on gameplay elements as well, sometimes even removing key cards from my deck. As interesting as this is, I will say that as the indecisive person I am, being bombarded with tough decisions occasionally made me feel like tearing my hair out, though that’s more of a personal foible than an issue with the game itself.

What truly makes the story compelling, though, is a mix of excellent writing and well-formed characters that give extra weight to each beat and decision you make along the way. Meve herself is a stern yet fair leader, fearless in battle and an effective strategist. Then there are those around her such as Reynard, her loyal and steadfast second in command, and Gascon, a sly and cunning bandit whose insights into tactics are more worthwhile than you’d initially expect. Each character you meet is fleshed-out and has their own unique desires and ambitions. This leads to some effective world-building and gives a sense of urgency and substance to the events of the campaign. Additionally, all the characters are skillfully voiced, with nuanced performances across the board. 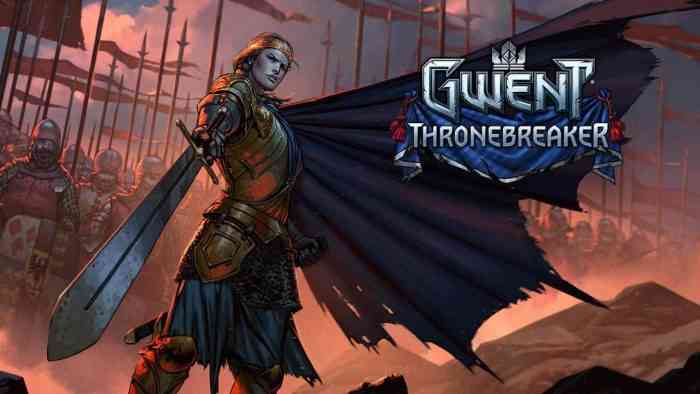 Though the meat of the gameplay in Thronebreaker is a tweaked version of the aforementioned Gwent, what surrounds those card battles is an isometric, semi open-world RPG. There are segments of medium sized maps that can mostly be explored freely, filled with battles, points of interests, puzzles, and more, similar to what you’d see in a mainline Witcher game. This exploration is bolstered by some beautifully detailed environments presented in a hand-drawn look that just works. Mountaintops howl with an icy sharpness and swamps seethe with unpleasant atmosphere, all of which provide a distinct sense of place. In these varied lands, you control Meve by mouse clicking where you want her to go and what she will interact with. This system does a fine job of laying out the quests and activities to be accessed at the pace you see fit, though I did find it frustrating how slow Meve’s movement speed is. You can upgrade this in your camp, but it feels wrong to be forced to spend resources on an ability that merely makes the game less cumbersome to play rather than boosting the power of my army or my deck.

As far as the card play goes, it’s more tactical, thoughtful, and fun than it’s ever been. Even in its primitive stage, Gwent has always been an enjoyable card game, but it has since been significantly overhauled, adding plenty of new keywords and mechanics. These additions add depth to the gameplay, and though they come with a learning curve, are fairly easy to grasp.

At its core, the goal of Gwent is to have more points at the end of a round than your opponent. You build up points by playing cards, each of which has its own value. There are also various abilities cards can have that affect either your board state or your opponent’s as well as trinkets that function similar to “spell” cards you’d find in other card games such as Hearthstone. In a standard game of Gwent, the board begins as an empty field, and each player plays one card at a time until their respective hands are empty or until they pass. In Thronebreaker, however, the rules can be switched up depending on the context of the story. For example, if you attack a heavily guarded enemy camp, the entire first row of your enemy’s battlefield will be filled with permanent walls and a fortified gate.

These situational conditions create variety in many of the story battles, adding optional, secondary objectives and alternative ways to win. Equally, it enhances immersion by establishing a more accurate representation of the fictional battlefield Meve is fighting on in a meaningful way. Finally, another thoughtful addition is the leader ability. Both you and your opponent have access to a unique leader ability on a cooldown that represents Meve’s weapon of choice. At first, I was worried the leader ability would come across as a design afterthought, but it is a crucial element to winning games, and in some cases, using it properly is required to succeed.

Thronebreaker: The Witcher Tales could have been a lackluster, uninspired spinoff in an attempt to capitalize off the Witcher’s success, but it is so much more than that. Sure, I have some minor gripes, such as the lack of a mini-map and guide markers, or the anticlimactic final battle, but they all seem trivial when looking at what Thronebreaker accomplishes as a whole. The intricately layered story and carefully crafted characters and writing are some of the best I’ve seen this year, and the card play is more rewarding than it’s ever been before. Whether or not you are a fan of the Witcher series, or even card games in general, Thronebreaker deserves your attention.

Cyberpunk 2077: QA Team Has Reportedly Misled CD Projekt Red
Next Darksiders 3 Review – An Unfortunate Misstep in the Apocalypse
Previous Spider-Man: Turf Wars DLC Review – This Mob Ain’t Big Enough for Both of Us