The Walking Dead and virtual reality. It seems like it’s a marriage made in video game heaven. And April’s The Walking Dead: Saints and Sinners proved that it definitely can be, if done right. Now, a new VR experience for The Walking Dead fans shuffles its way onto the PSVR: The Walking Dead Onslaught. Get on your headsets and fill up on ammo, folks, ‘cause it’s zombie killing time once again.

Like Saints and Sinners, The Walking Dead Onslaught has you play in first-person view but this time as various characters from the TV show. You’ll see a few familiar faces, including fan-favorites like Darryl and Michonne. You’re all part of the Alexandria settlement, just like the AMC series, fighting to eke out some semblance of security amidst the zombie infestation. Through a combination of cut-scenes and missions, your settlement takes shape and you progress through the game’s story.

The Walking Dead Onslaught uses the Hub system, with your settlement as the crux, and you venturing out from it temporarily on each mission. Your goal is to rebuild and strengthen your fledgling community by picking up supplies and upgrade materials during your missions, which you then can use upon successful completion. You can also unlock new characters who will join your settlement, bringing with them bonuses like new building blueprints.

Get Out There and Kill Some Walkers

It’s a simple and appealing system that is easy to learn, and the thrill of seeing your small town slowly improve and grow after you return form a trip outside the walls is a satisfying feedback loop of gameplay. It also adds nice sense of tension to missions, forcing you to constantly choose whether to explore every nook and corner of a map to find more of those much-needed supplies, or focus on your safety and the goal of just getting back home alive.

The missions themselves have some enjoyable aspects, especially at first. You’re given a thin narrative set-up and then it’s off to kill some zombies. A lot of the missions are flash-backs in which you take the role of Daryl himself, and these are also the mode by which the narrative is conveyed to you. You also sometimes just go on supply-runs as various characters. Narrative depth is a bit lacking, but that didn’t bother me for the first little while since I was enjoying just killing zombies. 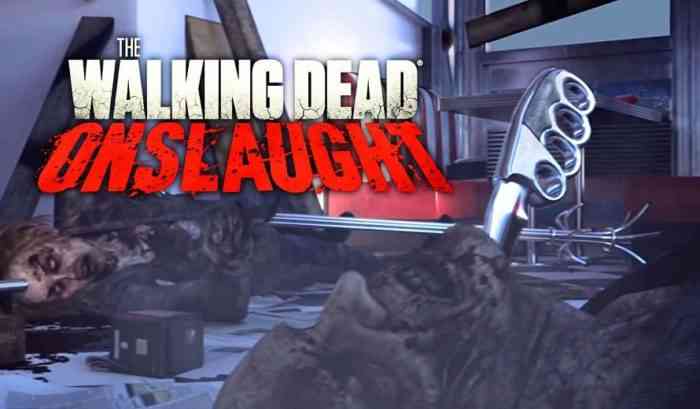 Most missions are straightforward: move through a linear course that has a few possible pathways, to a set destination, all while avoiding various undead along the way. Movement is fine, smartly incorporating all the recent VR options including free movement and snap turning. But it all begins to grow tiresome pretty quickly. There isn’t a lot of mission variety and you’ll get that “been there, done that” feeling eating away at you like a hungry walker before too long. The environments themselves are also uninspired, usually the same alleyways or rooms littered with crates and debris forcing you into set routes. Finishing a mission rewards you with building upgrades and new recipes, but then it’s back out there for another mission, and so on over and over.

Sure, there are a couple of times where the formula is changed up a bit. One variation has you moving though a mission trying to grab as many supplies as you can before The Horde, represented by an encroaching red zone, catches up with you and kills you. Another time, you have to survive for a certain time until you’re rescued. But despite these weak attempts, it’s telling that even they don’t offer much difference from the majority of missions.

During missions, if you can’t avoid a zombie, you’ll have to kill them. The Walking Dead Onslaught has a few combat options; you can use a number of handguns, shotguns, even machine guns you find along the way, or there are melee alternatives like knives and wrenches. Unfortunately, using guns isn’t quite as fun as it should be, for a few reasons. First, there is their underpowered nature. Enemies absorb multiple shots before they go down, even with shotguns, so I found myself either running out of ammo or just getting frustrated and switching to melee.

Bringing a Knife to a Gunfight

Secondly is the aiming, especially for two-handed guns. Using the Move controllers, which are mandatory in The Walking Dead Onslaught, you must grab some guns in two places to aim them. But I found that keeping the guns steady while holding them was just too finicky and unreliable. Between the annoying jiggle of the two-handers and the weak stopping power of almost all the guns, I found myself avoiding them in favour of melee weapons after a while.

Even melee combat, so satisfying at first, got to be too repetitive in The Walking Dead Onslaught. My go-to was the hunting knife, and it was easy to get an insta-kill head shot on zombies by learning to time the swing of my Move controller. Dispatching endless waves of walkers this way turned from fun to tedious after a while, though, as the initial thrill of the eye socket shank gave way to boredom. Swiping down over and over, I felt like a dead-eyed bureaucrat stamping documents, except these were zombies instead of papers, and my stamp was a knife. How ironic that in playing The Walking Dead: Onslaught, it was I who unwittingly became the zombie…

If you are a fan of the TV show, The Walking Dead Onslaught offers some cool moments where you interact with your favorite characters. Only with a few, though, do you get the actual actor’s voice – a notable example being Norman Reedus as Daryl. Others characters are of varying degrees of quality – the voice of Rick Grimes, to name one, didn’t really sound to me like the person from TV at all. There’s also the fact that the character models are crudely rendered and lacking in detail at times; overall I had a hard time immersing myself in the game and didn’t feel like I was really inhabiting the universe of The Walking Dead, despite the references to the show sprinkled here and there.

That goes for the zombies as well – and let’s face it, they are the most important aspect. A huge part of the fun in a game like The Walking Dead: Onslaught should be the pants-crapping terror you feel being confronted by actual fricking zombies in virtual reality. But the low-res, basic models just didn’t make me feel truly scared, and I was disappointed that I felt so blasé during most of my playtime, even when surrounded by hordes of undead flesh-eaters.