The Golf Club 2 Review – Step Aside EA, Maximum Games Takes This Round

Summer is here and with it brings a plethora of opportunities to go out and enjoy the great outdoors. Unless of course, it is too hot or raining, or there are mosquitoes the size of small birds just waiting to feast on you. Thanks to HB Studios’ The Golf Club 2 you can enjoy one of those summertime activities without having to even leave the couch. While I may have missed out on the original, I did get to play it’s VR incarnation and was pleasantly surprised with how fun it was, even for those who aren’t that big into golf. Will The Golf Club 2 up the ante? Let’s hit the links and find out.

Now if you are new to the series or haven’t played a golf game since the days of NES Open don’t worry, there is a tutorial for that. Lots and lots of tutorials actually. I’m hard pressed to think of anything that doesn’t have a tutorial included, from how to swing the club all the way to how to change the hat you’re wearing. It’s probably a little overkill on the tutorials. If it wasn’t in the initial tutorials, options are given to be taken to a lesson on some more advanced aspects as they arise. All of this does a good job of explaining all the mechanics but they didn’t grab me as much as they did in The Golf Club VR. There I was very much invested in what the instructor had to say, in The Golf Club 2 I found myself ready to be done with the lesson before it was over more often than not.

So now that the basics have been covered it’s time to hit the link, for real this time. There are some options. Want to play a quick round? Choose from any of the 100,000+ user-generated courses and enjoy. No that’s not a typo either, there really are that many courses to choose from. If you are looking for something a little more focused there is the career mode and societies to choose from.

I gave the societies a whirl to start. They act as their own little golf club complete with a fancy clubhouse. Each can offer their own society-specific tournaments and seasons. They certainly are a fun way to team up with a group of friends to see who really is the best. It’s not just wins and top 10s that matter, the societies also come with record books to keep tabs on ranking on a variety of different stats. It really is a pretty cool way to have some friendly competition among different communities. The societies can also level up and offer swankier club houses and seasons with more events. There certainly is potential here for some rivalries between different golf societies. 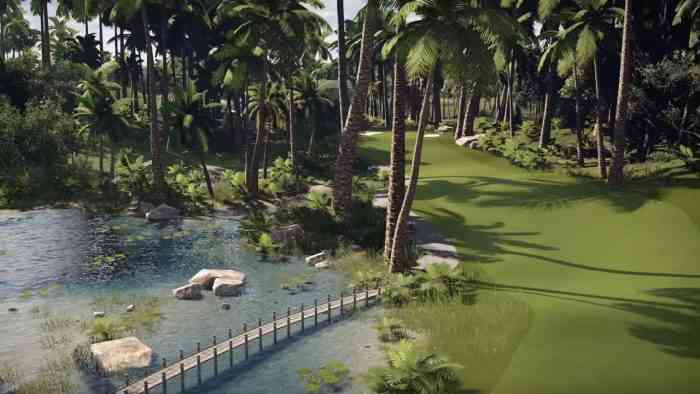 Being part of something bigger is always nice but sometimes you just want to strike out on your own. The career mode offers that chance. Players will create their own career society and work on building it up on their own. Instead of other club members, the competition is the AI. While the numbers pre-launch in the society was minimal, I was now in a field of 100 competitors. Seeing leader boards change in real time with 100 participants was great, except when it was my name dropping further down.

Now that we’ve got some of the major components out of the way, how do the actual golfing mechanics feel? For the most part, it all felt pretty good. It was however really tough to gauge strength. For instance, trying to chip in from the fringe with a full swing should give about 12′ in distance. It would stand to reason that if 6′ was needed then pulling back the club half way would give the right distance. The results of doing so however consistently land closer to the 2′ -3′ range.

“Playing on the PS4 Pro in 4k the majority of it all looked pretty incredible.”

Away from the pin it seemed much easier to hit over the expected distance rather than under as well. This makes club selection a bit more vital. The wind was also an interesting factor as well. Several times I found myself adjusting my aim to compensate for a rather stiff wind, and hitting the shot with perfect timing and aiming, only to a 12 mph cross wind have zero effect on the ball. When I didn’t compensate for the wind, it most certainly had an effect. There are a lot of variables at play though, making pinpointing the issue tough, just the feeling that there were shots that most certainly should have been affected by wind never actually were.

So this all certainly sounds like golf, how does it look? Playing on the PS4 Pro in 4k the majority of it all looked pretty incredible. I was really impressed with how lively the courses looked and felt. Tournament matches had crowds along key areas of the holes. There was wildlife, planes, and the water looked amazing as well. The atmosphere is impressive. There are a few issues along the graphical side as well though. 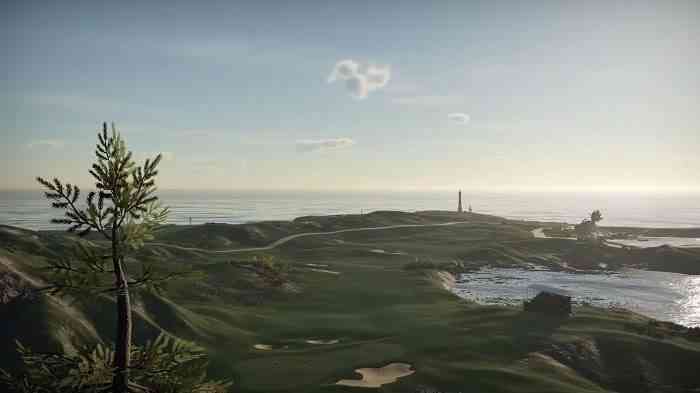 The most glaring being a blurry line just a few feet in front of the ball. This is where being on the PS4 is a real drawback. The radius around the ball that is super high definition, to that behind the line is rather small. Generally on PC this is something that users can edit a config file to extend it out further to their liking. The change in definition is actually somewhat subtle, but because it’s so close to the ball where your eyes are most likely to be looking, it becomes hard to miss. If that radius were 2-3 times as big, I don’t think it would be noticeable unless someone was actively looking for it. I did try and turn off the Depth of Field, this worked sometimes, other times an even more jarring line appeared. If it wasn’t for the slight arc to it would almost look like a scan line.

Overall the game does feel really good. The mechanics are solid with the only issue being gauging strength. The career and societies are going to offer up some good possibilities to players along with some real extended play times. 100,000+ courses to play is slightly bonkers. That’s great for variety but it’s also a double-edged sword. While most are well optimized, there are times that during your back swing the game will stutter. I’m sure you can imagine what that does to a shot. The occasional stutter on a few courses is the like the game as a whole. There’s a whole lot to like about The Golf Club 2 but there are a few things here and there that bring it down a peg. It’s still a good game, but not as great as it could be. 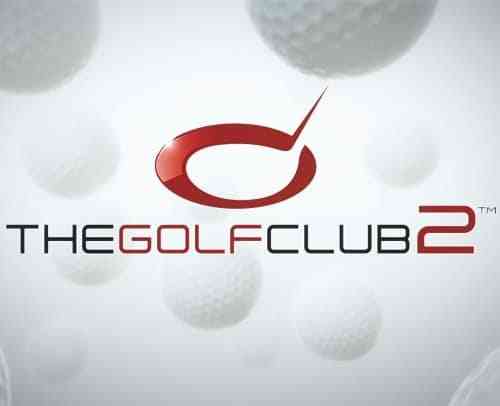 Only By Midnight’s Curved Space Officially Delayed On All Platforms
Next Valkyria Revolution Review – Something’s Rotten in the State of Jutland
Previous Cars 3: Driven to Win Review – Same Old Racing Game, With A Disney Twist