Music rhythm games have proved popular on videogame consoles since 1996 when PaRapper the Rapper launched on the Playstation. A rudimentary 2D game by today’s standards, it provided the core gameplay for music rhythm games. In PaRapper you match button presses with the symbols displayed on the screen.

Jump ahead almost a decade and that basic mechanic was gussied up to make those button presses feel like playing music Rock Band and Guitar Hero created music instrument designed controllers to intensify that illusion.

Take another decade leap and VR provided a new platform for music rhythm games. This time, players continue to match button presses but do so in a virtual world and in a much more physical manner. Games like Audica, Beat Saber and Synth Riders transformed what was a sedentary gaming experience into a genre which you can use as part of a fitness regime.

Synth Riders has been out on PCVR since 2018 and has just now been ported to PSVR. Was anything lost in translation? Anything gained? Let’s slip on our PSVR headsets, grab those PS Move controllers and see. 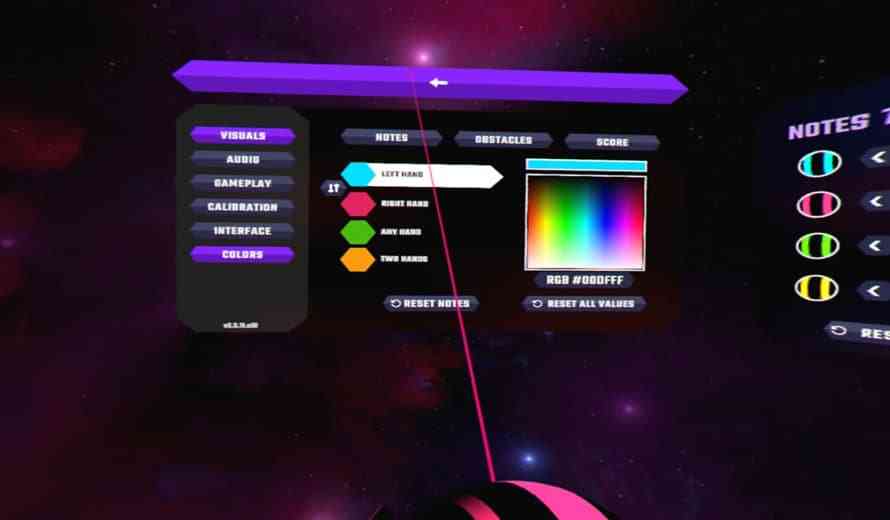 What’s In The Box, What’s NOT in the Box

Synth Riders comes to the PlayStation VR with an impressive offering. To start off, the base game comes with 55 tracks – compared to the 15 that Beat Saber launched with on PSVR. And what a diverse selection of music it is! Which is a good thing, since music taste is so individually subjective. Synth Riders includes genres such as Electric Swing, Synth Wave, Rock, and Punk Rock are in the base game. The four music DLC packs add another twenty-five tracks and feature punk artists such as Bad Religion, Rancid and Offspring. Overall, Synth Riders has a more edgy and rock focused playlist than the EDM one favored by other similar games.

The only thing missing at launch, and it’s a biggie, is multiplayer. That’s a bummer to be sure because it offers more than just leader scoreboards. Synth Riders multiplayer allows for competitive and combative battles. It’s best described as the Mario Kart mode because players can send status effects back and forth amongst themselves. The good news is that a multiplayer patch is forthcoming. And even better – it will be cross-platform.

This deserves its own section because they are so darn many of them.

You can pretty well change anything you want. Don’t let the default cyan and magenta colors? Change them? Don’t like the default background for a track? Change it. Want to modify how hard the song is? Use the modifier options to change them. 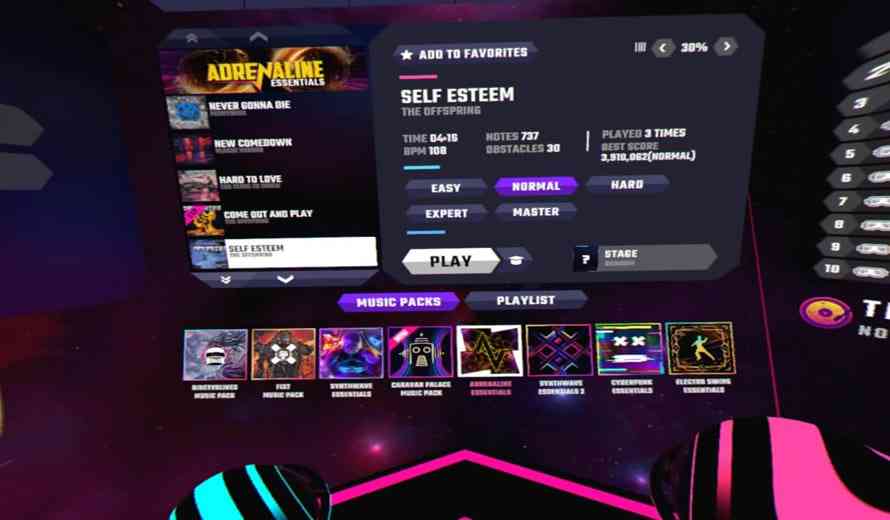 The wealth of options also extends to the music selection. Tracks are broken down into categories from which you can select single or multiple tracks, tag your favorite tracks and filter on them. Or you can choose to randomize which track and background is played next. Or you can pick a favorite background and have that always display.

There are a staggering number of options and if there’s any knock here, is that there are a lot of menus and submenus to drill through. The flexibility presented to the player is vast. You can even specify RGB color values to nail down the exact shade you want. 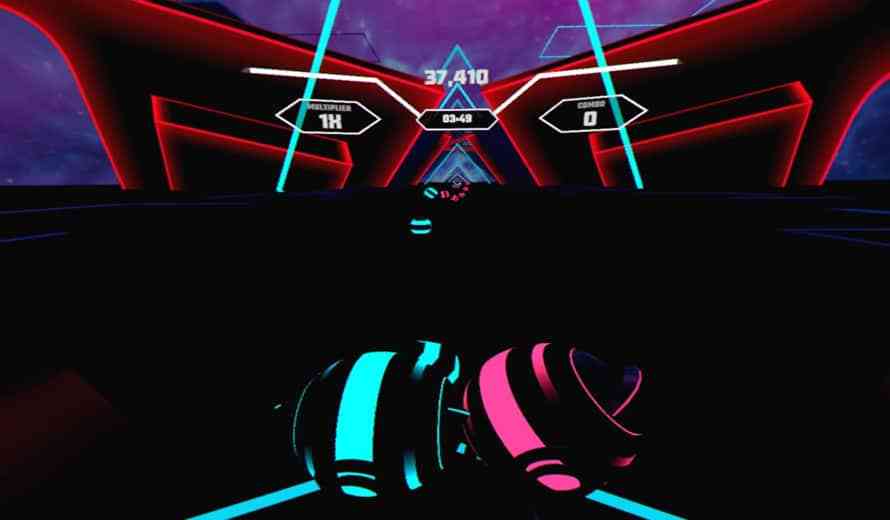 There are several game styles you can choose from. The default style is Rhythm. In this mode, you only need to line up your controller orb with the music track objects. Force mode apes Box VR so you have to punch the notes as they whiz towards you. Then there is Spin Mode in which the music notes come at you from different angles.

There are 5 difficulty settings along with a practice mode. A time scale for each track allows you to quickly jump to the section of a song for quick practice until you can master it. There’s more. On each DLC pack, there is a track marked with a EXP tag. Those tracks have a bonus background which is not scored. Instead, it offers you psychedelically animated backgrounds tailored to those designated tracks a la the trippy 2001: A Space Odyssey Star Gate journey.

All of these options add up to enabling you to set up and customize the game to give the maximum fun or challenge possible. Or both at the same time.

Bright neon colors! That’s the style chosen here and oh boy! – do those colors ever pop on the PSVR’s OLED display. This is a gorgeous looking game. From your orb controllers to the musical notes and rails to the varied backgrounds that usually feature a SF motif. The contrast between the bright colors and the inky blacks that the PSVR can display makes this a showcase PSVR game.

The backgrounds are not intricate but this matters little as your attention is on the center of the screen on the notes, rails, and obstacles. The game runs butter smooth on a PS5 with nary a hint of slow down or frame drops to be seen.

In the end, it all comes down to the gameplay. On first sip, the Synth Rider mechanic of holding up your two orbs, aka your two PS Move controllers, and lining them up with the same colored notes seems a tad tame. It lacks the immediate impact you get from Beat Saber and slicing through blocks. But, as you get into flow of the game, a rhythm develops between you and the song. The swirling and curving sequence of the notes and rails coalesces to get you into the song in a way that Beat Saber doesn’t.

Beat Saber feels percussive. You strike at the notes like a drummer. In Synth Riders you are flowing with the melody and chords and vocals of the song. It’s a more internal state, and which one you prefer will be mood dependent. With Synth Riders you may feel more like dancing because you are moving with the flow of the song rather than attacking it. This is further emphasized by strategically placed obstacles that force you to dodge left or right or down, movements that lend themselves to making you want to dance. Unfortunately, I can’t address the multiplayer aspect with this review, but when it comes, that will be a whole other level of gameplay to experience.

Synth Riders makes a great complimentary music rhythm game to Beat Saber. Beat Saber is a great outlet for aggression and feeding your inner Jedi. Synth Riders lets you sync with the music and release your inner creativity. Both are excellent forms of physical exercise. I’ll give Synth Rider the nod, though, for more options and subjectively better music. Plus, the original Star Trek Photon Torpedo sound effect used for combo leveling up never gets old.

***PSVR Code Provided by the Publisher for Review*** 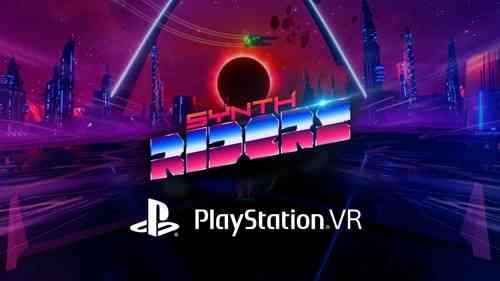