Stygian: Reign of the Old Ones Review – Finally an Amazing Lovecraft Experience

Stygian: Reign of the Old Ones Review

Fans of H. P. Lovecraft, your day has come! Finally, a Lovecraftian RPG that honours cosmic horror from the pop-culture surface down to its historic core. Stygian: Reign of the Old Ones by Cultic Games is an exploratory game that is brave enough to take the player down an uncomfortable journey into Lovecraft’s mind.

Let it be known that this game is no power fantasy. No matter how correctly you do things, your character will not be able to avoid traumas. You will be afflicted with curses and mental illnesses, most of which can never be cured. Let go, embrace the darkness and dive straight into the madness of Stygian’s world—after all, that’s why you’re the protagonist.

Following a major disaster that has thrown the entire city into chaos, you follow a mysterious man in your dreams that leads you towards cryptic clues as to what may have really happened to the world. Waking, you decide to investigate, leading you down a rabbit hole of secret societies and horrifying truths.

Stygian is a good ol’ classic RPG. You create your character made up of stats, find companions, loot and explore your surroundings, level up, talk to people, turn-based fights on a grid. Within all this, I’m happy to tell you that the game knew what to prioritize as the exploration and investigative elements of the game are so, so good. There are multiple ways to find clues, branching leads that can be investigated in different orders, and an answer that you will form organically without some type of artificial handholding. The writing is atmospheric and compelling, directly incorporating many of Lovecraft’s stories while telling an original story of its own. In fact, a fictionalized version of Lovecraft’s wife (Sonia Greene) and his alter ego (Randolph Carter) are major characters within the game.

The major mental illnesses are incorporated amazingly into the game. Your hallucinations aren’t some throwaway things the devs haphazardly threw together—they are handmade elements that are a part of the world. From a headless dog barking in a dark basement to friendly men with animal heads, the hallucinations were so interesting that I was actually glad that my character turned schizophrenic. Additionally, your madness will alter many of your dialogue choices as well (don’t worry, you can see them before you pick ‘em) and the number of alternate lines of dialogue they wrote is downright impressive.

The only problem I had with this game is the combat, which I think is a problem of balance. You will quickly realize that melee is king in this game—they hit harder and you don’t have to pay money for bullets or reload. There are rituals and spells but the reward does not justify the middling results because they cost your precious sanity while having a high chance of being miscast to hurt yourself. So right now, most fights just turn into a melee mosh pit in the center of the map. A good balance patch or two should fix this problem.

You’ve probably noticed that Lovecraftian games have been exploding as of late. Unfortunately for many people, including yours truly, they always fail in delivering a proper Lovecraftian experience. For those who don’t know, cosmic horror is defined by how insignificant and fragile humans are in the grand schemes of the universe. What many imitators forget, however, is how to attach this to the human and societal experience. Sure, you can make your old gods unintelligible and all-powerful but that doesn’t really translate to our experiences, does it? 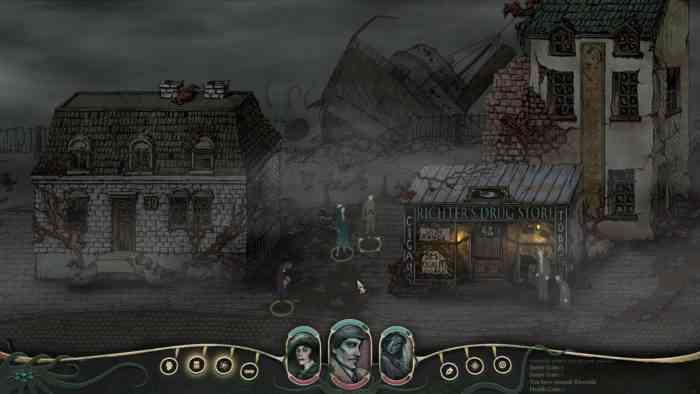 Stygian understands that cosmic horror can exist in our ordinary human lives. The world of Stygian is uncaring, filled with people that care only about benefiting themselves and won’t help you unless they can take something in return. People won’t remember your story, you won’t be a hero. Your companions will join you because it benefits them, not out of loyalty or friendship. Selfishness and distrust are rewarded while altruism often comes with a huge cost.

Not only is your body fragile but so is your mind. Every single fight you are in (occult or not) will scar you mentally, adding up until they turn into debilitating conditions. That’s something we don’t often think about in video games, right? Just imagine someone ending countless lives and being constantly forced into life or death situations, how would that affect the minds of our characters if they were realistic? Unless you want to turn into a literal psycho killer, you’ll soon learn that murder, even the just ones, comes with a price.

Lastly, Stygian does not shy away from some of Lovecraft’s controversial themes, such as his blatant racism, while editing the theme to show racists as part of the paranoid world. It’s a subtle but brilliant criticism of Lovecraft’s work. Not only was racism prevalent aspect of the time in history, but it also has a powerful thematic place in cosmic horror of not being able to understand an alien culture and language. I’m very impressed that Cultic games were brave enough to venture down this dark path and criticize the very author that they are a fan of.

I honestly don’t think this game is getting the attention it deserves. The bad things (bugs, balance, optimization) in this game can be patched while the core of this game is phenomenal. If you are a fan of Lovecraft’s work, you are doing yourself a huge disservice by not checking this one out.