Who doesn’t love a hard game? That punishing challenge can really push you to overcome, resulting in genuine satisfaction when you conquer that challenge that was giving you grief. It was such a popular hook that it spawned a wildly successful franchise, along with a ton of influence over other titles that followed. Cryptic stories, terrifying bosses, and a feeling of isolation are all things that you’ve experienced before, and you’ll experience it to an almost excessive level in Dark Devotion.

These type of games are keen on giving bits of lore and world-building via cryptic means such as item descriptions, NPC interactions, and even the general feel of the world itself. Dark Devotion definitely does a good job of this, and creating a foreboding atmosphere is something it excels at. Dark Devotion also does a really swell job from an aesthetic standpoint. Featuring some well-done pixel art and some pretty horrifying monsters, The temple is certainly one of the creepier places to explore that I’ve come across. You won’t see much variation beyond the cold, stone walls, but you’ll still see a wide range of enemies and bosses, along with a number of creatively designed NPCs that will aid you on your quest.

This is only enhanced when you enter the Temple, the dungeon you’re cast into in order to root out whatever evils lurk within. Your vision is limited, so slow, deliberate gameplay is required, and rushing will only get you killed. Mind you, even careful play isn’t quite enough, as this is a pretty tough nut to crack. You’ll die frequently, be it to spike pits, giant bladed pendulums, or even that angry, one-armed man who is trying to mace you to death. There’s all manner of danger in this game, and I was definitely interested in seeing what else I had to tackle as I plugged on. I will say though, that for the amount of exploring that is clearly required, it cannot be stressed enough that a good map is important. You want to know where you are at all times, right?

Anybody Got A Light?

I’ll say right off the bat that the map system in Dark Devotion is poor. Rather than following the tried and true metroidvania style where you can clearly see where exits and points of interest lay, Dark Devotion instead has them generally kind of linked together. You could argue that this is meant to help push you to explore, but it makes things murkier if anything. Given how the dungeon is laid out, I’d prefer that being able to traverse it isn’t made more difficult via the few means I have, and the map absolutely requires a bit of work in this regard. The poor layout isn’t the only problem you’ll grapple with though, as the text size is absolutely brutal, and this isn’t due to it being too dark like the dungeon itself. The text size is probably some of the tiniest I’ve seen on the Switch, and even in Docked mode, I found myself genuinely frustrated at how hard it was to make out what each item said, instead of trying to rely on the legend for each point I was at. The developers have confirmed that they are planning UI enhancements though, so this should hopefully not be as big an issue in the future as navigating the dungeon can be a real chore at times.

The controls also will definitely take getting used to. Rolls can be done making use of the shoulder buttons, with each one leading you to tumble in its respective direction. Triggers are for your two hands, and your consumables will be handled by the directional pad. It’s all pretty part and parcel, but it has some confusing choices as well. The presence of a menu that allows you to view detailed information is there, but you’re instead forced to click down on the right thumb-stick and navigate these things (or try to with the tiny text) all while dodging your enemies best efforts to bring your insides outside. The fact that it doesn’t actually pause the game doesn’t really bother me, but clicking down on the thumb-stick to navigate the dizzying amount of items and weapons you’ll come across got old fast. Controls and UI aside however, there were still things I liked in Dark Devotion. Thankfully the gameplay is free of blame in this case, with combat being generally satisfying, if a bit simple. 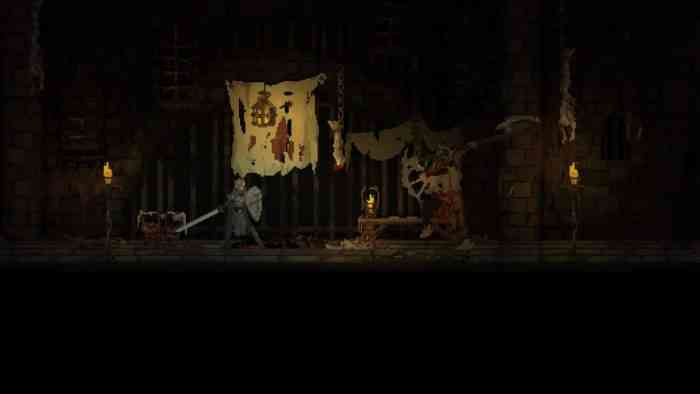 Dark Devotion does a great job of nailing that methodical approach to combat that its inspirations have tuned so finely. Each swing of your weapon is tied to a stamina bar, with items eating up various amounts depending on their type. You’ll find all manners of weaponry, both melee and ranged, and each of them plays uniquely enough that it’s worth trying them out to see where the benefits lay. Ranged combat helps me land a few hits at a distance, letting me get a leg up on those deranged cultists.  Early on I was particularly fond of a pair of claws I got off one of the borderline BDSM-style enemies I ran into. They were speedy, allowing me to sneak in a few hits before having to roll away. However, one bad roll later and I’m back to Filthblood Shelther, the main hub of the game and my snazzy claws missing from my inventory.

This is another aspect that I was frustrated with. Gradually, you’ll get the means to visit the blacksmith and help customize your loadout, but the actual improvements and changes felt like they came so infrequently that each time I had to delve back in I was just annoyed I didn’t at least get to pick something new. The dinky little rusted sword (and sometimes my bare fists) were fine enough, but I wanted to use those cool weapons. There’s a boatload of stuff to equip, and while combat is great, it took a while for it to really flex its muscle. The harsh penalty is offset a little by the presence of buffs that you can receive if you aren’t making much headway, but I want those cool claws again, dammit!

Melee and ranged combat is augmented further by Faith, the game’s nearly omnipotent currency. You can use faith to pray at statues to unlock secrets, purge yourself of disease, or even receive blessings. Faith is also restored by you performing your Templar-y (Templarly?) duties, mainly being casting out the various creepy-crawlies of the temple. There’s a lot of progress to be made in this game, it will just be a real struggle to start to see the benefits. Make no mistake, I enjoy a stiff challenge as much as the next person, but I honestly feel like Dark Devotion goes down the difficulty by obscurity route a little bit too often. A borderline unusable map and generally difficult combat combined with traps that kill you immediately could definitely turn people off, but those who choose to persevere will likely enjoy this game enough to see it through to its obtuse, confusing ending.