I had the distinct pleasure of reviewing Frogware’s The Sinking City when it first launched in 2019. As a fan of Lovecraftian horror, I knew this was a title I absolutely had to play. It can be tough to find a good Lovecraftian game and while it wasn’t without issue, the original launch of the game definitely filled that dark and brooding space in my mind. Seemingly out of the depths, the city of Oakmont has risen once more with the upgraded PS5 edition in a move no one saw coming but plenty should be excited about. So what can we expect from a return visit to The Sinking City?

We find ourselves once again arriving at the docks of Oakmont as private investigator Charles Reed. After many long nights of horrifying dreams, he has come to this strange town as the epicenter for a phenomena related to these strange mass nightmares and strange events that lead people from all over the world to this city half buried beneath the sea. The Sinking City undeniably has all the markings of what makes for great Lovecraftian horror: the 1920’s aesthetic and people, a strange and eerie location on the water, a troubled investigator, and of course madness abounding at every corner.

The Most Merciful Thing in the World, is Playing This Game

Right off the bat I immediately could feel the difference on PlayStation 5 with the enhanced graphics and 4K, 60fps enhancements. Everything moves fluidly and realistically. The original game had its own charm with its grittiness fitting into the narrative, but this new clarity and smooth motions actually do it just as much service in the other direction; it feels real, but it enhances the strangeness of this world. Encountering your first wylebeast is FAR more intense now that it can move around in a free and bizarre method to unsettle you relentlessly.

Textures and other details so much better this time around. The ripples of the water while moving your boat from street to street, the rain falling on Reed’s jacket, even the finer detail in the skin of the characters is so much more engaging. Character models could have used a little more work as things like hair and teeth still have that jarring “last-gen” feel against the more realistic backdrop of the city. 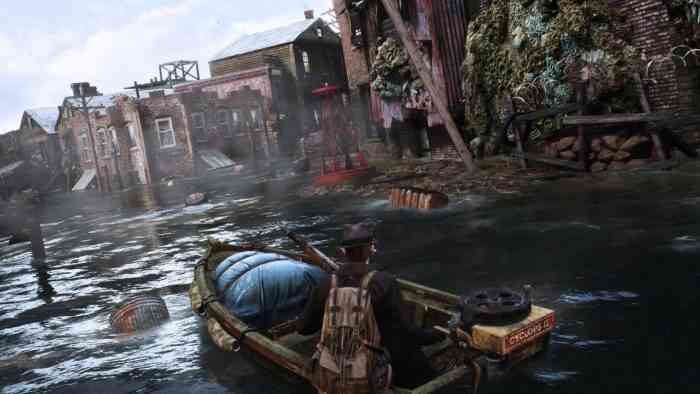 Reed isn’t coming to Oakmont empty-handed, either. Ever since a strange experience as a sailor out at sea he has unexplained mystical powers which let him see what has already happened – a rather handy skill for a PI. This is used extensively in the investigation segments of the game when you encounter Sinking City’s phenomenal mechanics to relive an incident and uncover what transpired. This is shown in an ethereal world with shadowy effects that reinforce the eldritch inspirations, and with the new graphical updates these look even better. It’s the finer details like this in the supernatural that seriously elevate The Sinking City above its previous edition.

Enhanced Immersion with the PlayStation 5

Of course, I would be remiss if I didn’t touch on the significantly faster load times than the PlayStation 5 edition brings, as well as the use of the haptic triggers. As a survival horror game, The Sinking City doesn’t hand you ammo and send you on your way. You’ll need to scrounge for materials and craft bullets yourself – which can also be used as currency in Oakmont. This makes every bullet matter, but with the haptic trigger you can feel that extra bit of tension as you aim down sight at whatever atrocity is in front of you and shambling forward. You feel the weight and panic of the situation as its no longer a button press but a very real pull of the trigger to try and save your life. What was already a moment of shock and tension is heightened even further with the DualSense controller. 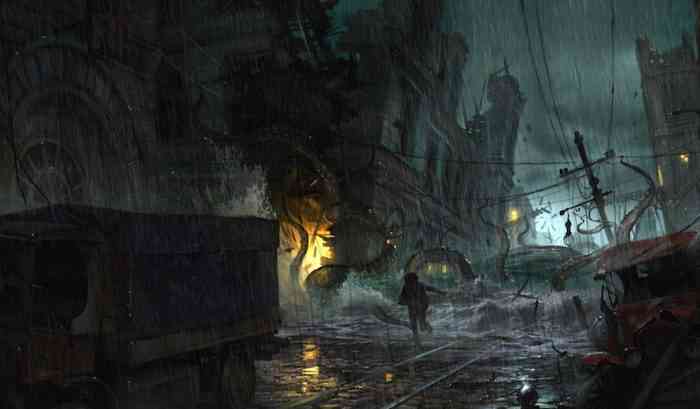 It does still suffer from strange NPC appearances. Either a city is entirely empty which suits the aesthetic just fine, or you’ll turn a corner and see 30 folks just wandering around. I did still notice some programming jank with them with animations of one person attacking another but still standing several feet apart, or interactions between people not lining up with their audio. Not necessarily game-breaking, but it can kill the atmosphere that the game does such a great job of setting up.

The Sinking City arriving on next-gen is a surprising yet greatly welcome arrival. With such a rich world and narrative, compelling investigative segments, and some truly horrifying features like experiencing hallucinations when your sanity meter drops, this was a title classic horror fans simply must try. The graphical upgrades are monumental in elevating the eerie, unsettling world which is already dripping with atmosphere into a new level, and the haptic triggers heighten the tension with every bullet. There are still some texture issues – particularly with the hair and teeth – that don’t fit in with the rest of the next-gen polish, and the strange NPC programming can definitely detract from the moment-to-moment situation. Beyond those minor gripes, this is still an exemplary outing into the world of H.P. Lovecraft and a beautiful horror experience well worth your time.

**PS5 code provided by the publisher** 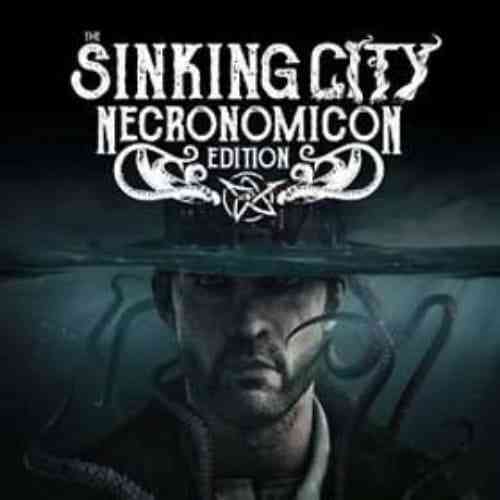 
Scorn is a Biopunk Nightmare Come to Life

Dead By Daylight Welcomes the Return of Resident Evil- Project W
Next The Battle of Polytopia Review – Easy to Pick Up, Hard to Master
Previous Loop Hero Review – An Addicting Cycle