Let me admit something up front: I don’t actually like roguelikes. The repetitiveness gets on my nerves, the brutal survival mechanics are not forgiving of my tendency to get distracted while gaming, and the simple graphics do very little to keep me invested. Having said that, I was blown away by Devolver Digital’s latest foray into the genre. Loop Hero is part roguelike, part strategy RPG, part city-builder, all of which rely much too heavily on cards for comfort. It’s a bizarre combination that shouldn’t work half as well as it does, but what really holds the game together is its narrative. Loop Hero is a surprisingly somber tale about struggling to save a world that has already ended.

“The stars in the sky are going out. One by one. But no one notices it. No one can stop it.”

These are the very first lines you will encounter in the game. They appear during the opening cutscene, which depicts the destruction of the world. There’s no explanation and very little build-up. All you know is that the world has been destroyed by an ominous glowing skeleton that calls himself the Lich. Then you wake up alone in a void of endless darkness… or rather, it’s endless until you arrive. You quickly learn that your memories allow you to reshape the void into a semblance of what it used to be. The downside is that this brings monsters and other dangers back along with the things you actually need. In order to rebuild the world, you must use fragmented memories to turn a simple circular path into a nightmarish dungeon… and then slay the boss who appears there. It’s harder than it sounds. 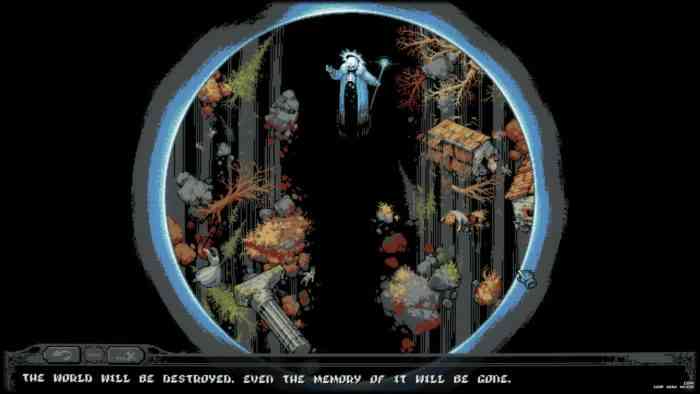 Perseverance in the Face of Hopelessness

Loop Hero starts out as a relatively standard roguelite, which means you’re always in danger, you have very limited resources, and you can expect to die a lot. The card game aspects offer an extra option to overthink things and screw up on a structural level. You can switch between Planning and Adventure modes with the tap of a button. In Adventure mode, most actions such as travel and combat are done automatically, without player input. This would be more annoying if the fights weren’t over so quickly. Monsters, cards, and your hero appear on the map as simple icons and as more detailed sprites in combat or other interactions. 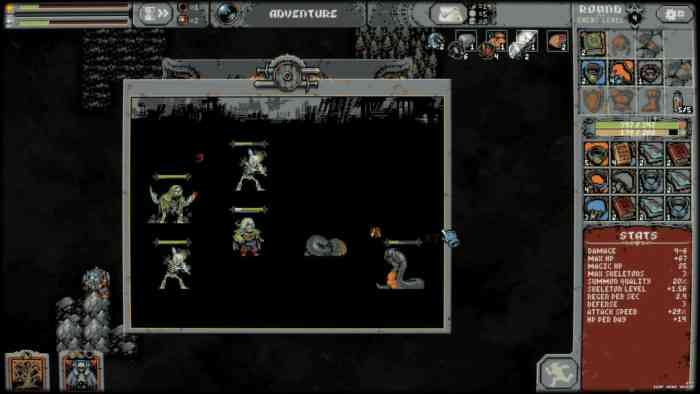 Walking over your campfire will restore health. Multiple monsters can appear on the same tile and gang up on you. Gather loot and, more importantly, cards by defeating enemies. Loot can be equipped for various effects and stat bonuses, but cards can be used in Planning mode to expand the ruins of this world and change the way the dungeon works. The downside is that they may also spawn enemies or carry other negative side effects. At least there’s a ton of options, so the game will never run out of replay value. 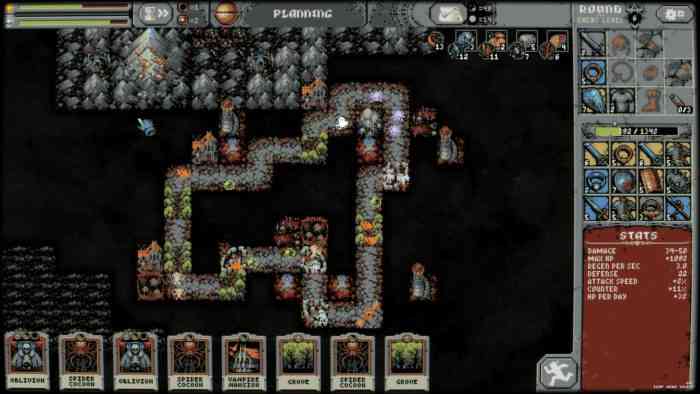 More powerful loot is available in later loops around the dungeon, but the enemies grow stronger with each turn around the track, too. Time is measured through the day meter at the top of the screen. Keep an eye on it, because it affects monster spawn times. Another bar underneath this measures your progress throughout the level. When it maxes out, the boss will appear on your camp tile. When you die, or when you’ve gathered enough resources for this expedition, retreat to enter the city-building mode. At camp, you can use resources to build things like a cozy campfire. Or a kitchen. Or a crypt. You can upgrade buildings to enhance their effects or dismantle them to replace them with something else. Some key game mechanics are only unlocked by building certain things in camp (such as the ability to choose between classes), which can be kind of inconvenient. Also, the RNG is basically never in your favor. 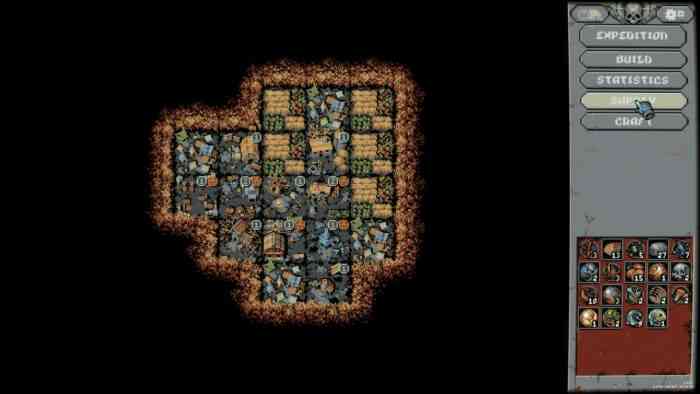 The Power of Nostalgia

The game has a very nostalgic charm to it. Cutscenes and battles incorporate beautiful pixel graphics that can span the distance from cute to horrific. The map is far simpler and reminiscent of older roguelikes, with tiny sprites indicating the different tiles and characters. The story, conveyed through card interactions, dialogue, and cutscenes, raises the question of whether you can really save anyone through violence. Most monsters are introduced struggling to communicate with the hero, showing that they are all thinking, feeling people, reduced to desperation and violence by the severity of their situation. The hero’s inability to convince them not to attack is portrayed as genuinely tragic. Each of these painful scenes hammers in that this world, despite its cute graphics, is genuinely post-apocalyptic. 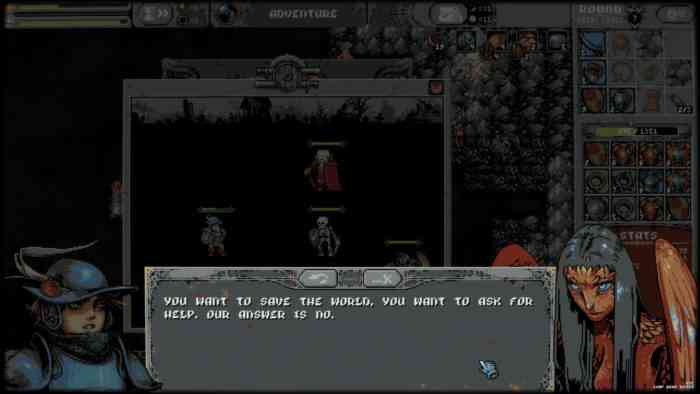 There’s no voice acting, but monsters, speech, and actions carry their own sound effects, which makes the game’s soundscape feel lively nonetheless. The music is as fun and retro as the graphics, especially the boss theme. It starts playing as soon as you’ve placed enough cards to unlock the boss and sets the stage perfectly. The battle for the fate of existence has never been so much fun. Each boss fight also incorporates the game’s themes of struggling against the impossible. After all, the fact that you’re still fighting means this world can still be saved, right? 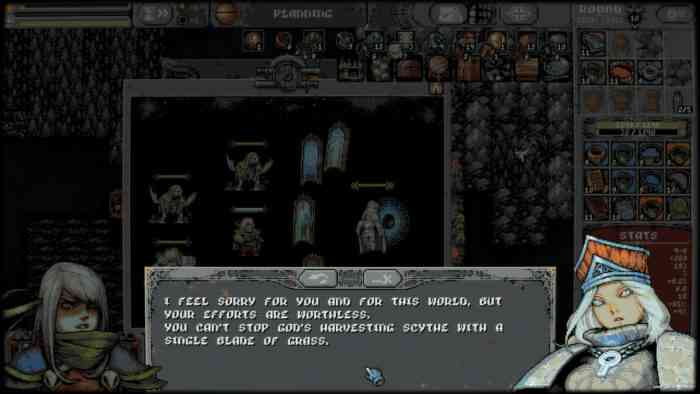 Overall, I had a great time with Loop Hero. I just wish I’d been able to unlock the Necromancer class sooner. Smashing my enemies with an army of summoned skeletons is amazing. 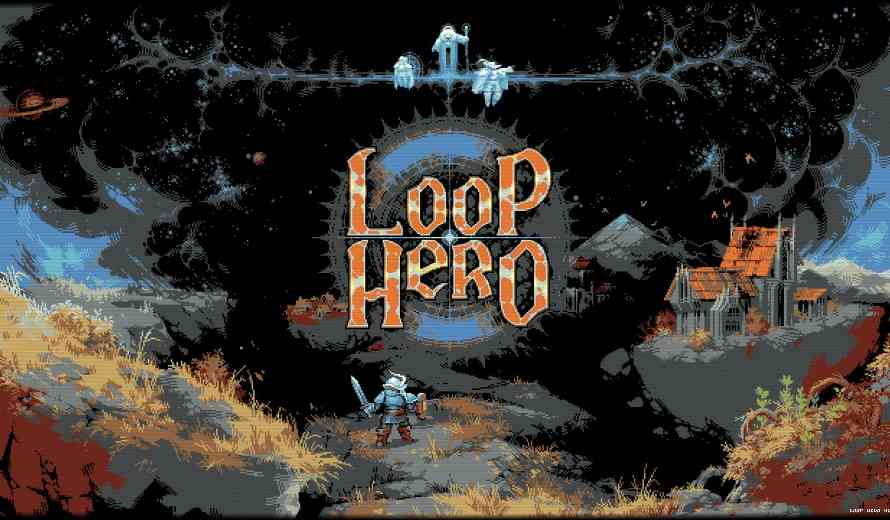