I know that it’s a thing to knock early access games, or to be a little suspect of titles that are still in their infancy, but I still think it’s exciting to roll the dice and discover a rough but promising gem just waiting to be polished. In any case, Dream Cycle certainly boasts a pedigree of connections to games, authors and genres that I enjoy, so I was happy to give it a look. For starters, it’s based (at least partially) on H. P. Lovecraft’s Dream Cycle stories, and set in the Dreamlands. Second, it’s designed by Lara Croft designer Toby Gard, someone who certainly knows about creating strong female lead characters. Lastly, it’s an action roleplaying game that focuses as much on stealth and magic as on melee combat.

I won’t pretend to understand the nuances of the story, in part because it’s unfinished, in part because Dream Cycle is fairly opaque and also because Lovecraft wasn’t necessarily the most coherent of storytellers. In any case, you play as Morgan Carter, a would-be sorcerer and dabbler in the magical arts, whose spirit form is unexpectedly banished to the Dreamlands by her power-mad great uncle, Randolph, who needs her power to ascend to godhood (or something like that). In the opening moments of the game, Morgan descends from a prim library to the basement of a gothic mansion, gradually shedding the recognizable detritus of modern life, ending up in a massive cavern that seems hold the remnants of an ancient civilization. This becomes Morgan’s hub area and it leads to other, procedurally generated levels (over 10,000 in early access, the developer notes) for her to explore as she searches for her uncle and, you know, save the world and return to her physical body. Even in early access, there are several distinct biomes and they’re surreal and often visually disorienting, filled with clues to the story and haunting remnants of the “real” world.

I really appreciated Dream Cycle’s unique art design, which is often somewhat desaturated and lives somewhere between realism and cel-shaded illustration. Motion capture and Morgan’s facial expressions are well done, subtle and effective without trying to be hyper-realistic. Composer Nathan McCree (who scored the original Tomb Raider games) returns to add some effective musical magic to the game.

Dream Cycle is a third-person, action RPG, so there’s naturally a focus on exploration, combat and stealthily avoiding combat as well. In addition to some fairly forgiving platforming, Morgan early on is able to use magic to swiftly transport herself short distances, very useful in traversing the game’s intricate and vertically layered spaces. Dream Cycle is one of those game where, if you see a spot that seems like it should be traversable, it probably is, using a combination of parkour-like movement and magic. 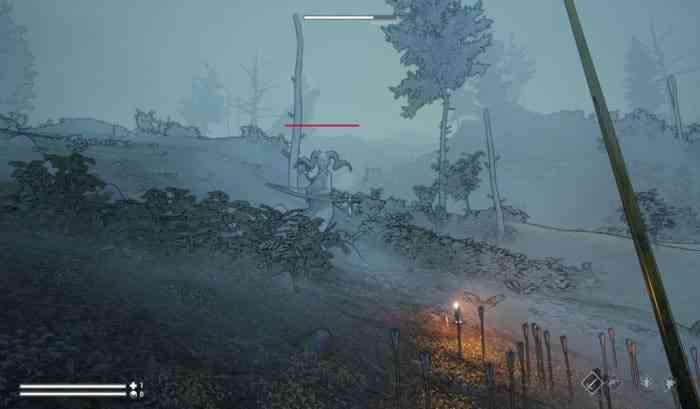 When it comes to combat, Morgan has a useful bow for long-distance assassinations, some contemporary guns and other weapons, melee weapons like swords, and of course, magic weapons, spells, and effects. Melee uses light and strong attacks and enemies telescope when their attacks can’t be blocked or when they’re invincible to attack. At least in the early game and with low-level enemies, combat was fairly basic and the heavy attack was mostly just usable in ambush situations, too slow to use consistently against swarms of enemies. All things considered, Dream Cycle has the potential for engagingly diverse and effective approaches to combat, though it’s still a bit rough around the edges.

The whole “10,000 levels” bullet point sounds impressive, but worrying, too, as most games have a hard time making a handful of carefully crafted levels really good. Dream Cycle also has some roguelite elements and again, I’d rather see a more curated experience that doesn’t rely on repetition for extended game time. But, those are just caveats and not really criticisms of the early access build, which legitimately points to a game with serious potential. It has serious chops in the combination of fictional inspiration, developer, and composer and many elements are working really well already.