Zen Pinball excels at producing content that taps into what’s the biggest thing right now and giving the public a pinball tie in. As I stated in my Women of Marvel review, the days of pinball machines in arcades are gone, so having Zen produce quality digital tables is very welcome even if it doesn’t quite scratch that analog itch you may have. Their newest table is a Rogue One tie in and it is one of Zen’s most challenging and is another great entry to their long list of beautiful tables.

When you start a new game, the camera pulls you around the table, showing all of the intricate details, ramps, bumpers and rails that it has to offer. The Rogue One table is particularly beautiful, even amongst the magnificent ones I’ve seen before. Set upon the world of Scarif, it features Orson Krennic in the top corner and Jyn Erso in the bottom, the battle of the Empire and the Rebellion is being waged, the table keeping the forces apart. A detailed and stunning version of the film’s poster occupies the floor of the table. With Jyn Erso offering up some of her best quotes from the movie, Krennic growling his threats and some of the iconic sound effects from the films, like the TIE fighters screaming engines, Zen outdid themselves to remind you just what table you’ve decided to tackle.

“The Rogue One table is particularly beautiful, even amongst the magnificent ones I’ve seen before.”

As I took stock of the layout of the table, I couldn’t help but think that it seemed quite simple at first glance. I couldn’t have been more wrong. As always, Zen provides you with a handy guide to the table to let you know exactly what you’re trying to accomplish. The list for this one is quite lengthy, much longer than any other table I had so far taken on. The seemingly simplistic layout of the table was actually a masquerade for the pro table that it truly is. Precision is the key to Rogue One, and much like the Battle of Scarif that you are playing on, you can’t just smash your way to victory. You must be tactical in the moves you make and precise as you move towards your final goal. This was very challenging as my desire to just keep hammering the ball with the main flippers kept me from advancing in the game. Missions are timed and hitting the ball just right requires patience and really understanding the table and how to work to your advantage. For the first time, I found myself holding the ball on a popped up flipper, eying up the shot before taking it, desperately trying to hit an Imperial guard or make it up the side ramps before time runs out. 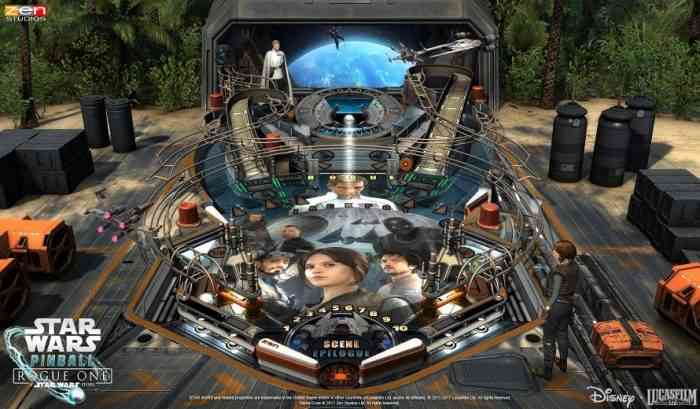 That’s where these pinball tables always rope you in. There are many that scoff at using your console to play something like pinball on but those naysayers just haven’t taken the time to try. The more you play, the more you get the feel for the table, the more you remember what to do next. It also helps that every time you get a game over, you’re reminded of what your top score was. So, that’s how you end up playing over and over again and suddenly you realize you’ve been banging away on a digital pinball table for over an hour and you’re going to be late for work again. These tables are always very addictive and the Rogue One table, in particular, due to it being so challenging, really pulled you in. It was almost like that feeling of finally beating a boss you had been stuck on for a long time to advance in Rogue One. It’s not like you were done the game just yet, but man, did it ever feel good to finally get that million point bonus you had missed the last three times you had played.

Overall, the Rogue One addition to Zen Pinball 2 is one of the best ones yet. Beautiful, detailed and brimming with Star Wars tibdits, this table is a great take on one of my favourite movies from last year. With it’s addictive gameplay, surprising length and advanced play style, Rogue One is a top level table to add to your collection. The only drawback may be that it might be a bit of a learning curve if this is the first time you sit down with Zen Pinball 2. If you’re up for the challenge, or you’re looking to step your pinball collection up, the Rogue One table is an excellent choice. It’s also a regular reminder of Star Wars, so that’s an added bonus!

Star Wars Pinball: Solo Pack Review – One Pinball Shot In a Million
Next Moto Racer 4 Review – A Rushed and Disappointing Racer
Previous Husk Review – A Husk of a Horror Game That Feels Rushed