Three key elements show what you’re in for the moment you begin Shadow Warrior 2‘s single-player campaign. A modified Datsun 240z, Stan Bush’s You’ve Got the Touch, and a character by the name of Lo Wang. Flying Wild Hog’s follow up to their 2013 Reboot of 3D Realms’ final game is deliciously cheesy; from its walking penis-joke of a player character, to the absurd lengths the game allows you to slaughter your enemies.

Be full-warned, if like me you missed out on Wild Hog’s Reboot, the storyline will make you feel as if you’ve woken up from a drunken stupor. Not that I mean to give the impression that presentation is one of this game’s let downs. Cut-scenes are paced like Blur’s Song 2, and they feature more abrupt cuts than a shredded film reel, but dialogue and characterization are surprisingly strong. It’s only when the game’s lore and background is being discussed that I begin to feel lost.

“Be full-warned, if like me you missed out on Wild Hog’s Reboot, the storyline will make you feel as if you’ve woken up from a drunken stupor.”

The highlight of Shadow Warrior 2’s storyline is Lo Wang’s side-kick; who spends most of the game exchanging banter from inside his head. Imagine Cortana with sass and a potty mouth. But because the game’s story is so lighthearted and within no danger of taking itself seriously, all you’ll need to concern yourself with is the gameplay.

Shadow Warrior may look like an Arena Shooter on the surface, but it’s actually got more in common with third person action games. Firearms are powerful and satisfying, but unless you’re going out of your way, swords and other melee weapons will be your first line of defense. These weapons dish out large amounts of damage within a very short period of time, and with access to a thrust-attack that’s able to knock enemies to the floor, and a 360 degree spin, you’ll feel like a human meat grinder in minutes. Firearms play an important role though, with machine guns allowing you to take care of smaller enemies that explode when near you, and shotguns able to dish out damage to multiple enemies at the same time. What this means is that while Shadow Warrior supports a unique style of play compared to its competitors, it retains what made ID Software’s recent DOOM reboot so successful, and that is the pacing of combat never flat lines. 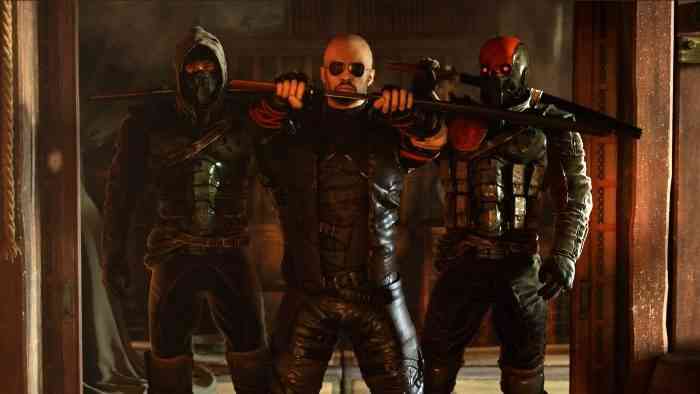 Just like a banging-melody, combat encounters always remain satisfying because theirs just enough moments to breathe in-between that you’re never tired of it. Enemies often drop health, energy, ammunition, and skill points to, meaning that the best way to earn these quickly is to banzai into battle with your sword held high. Intelligently, the designers don’t have any enemies that the sword is inconvenient for. Even mechanical drones that fly around shooting guided missiles hang low enough in the air to make attacking them up-close viable. The best way to play Shadow Warrior 2 is also the most exciting and rewarding, as hanging back and shooting from afar is not nearly as effective combing your firepower with blades, and magic.

“The best way to play Shadow Warrior 2 is also the most exciting and rewarding, as hanging back and shooting from afar is not nearly as effective combing your firepower with blades, and magic.”

The game’s magic is known as “Chi” and you’ll unlock cards in the game that allow you to upgrade different skills. These abilities range from the expected such as healing faster, to the brilliantly powerful such as being able to spawn spikes that hold enemies in place for a few seconds. The best part is that none of these cards are in a predefined path. You don’t need to unlock one card to receive access to another, unlike a skill tree.

It also means you’ll be playing the game’s multiple side-missions for enjoyment rather than grinding, although you do obtain helpful experience points for doing so. Despite reusing assists and not being quite as absurd as the game’s main plot, the combat system is so much fun you’ll often forget they’re side-missions at all. Enemy placement and levels are no less satisfying here as they are in the main game, and that just adds to the playtime and replay value. 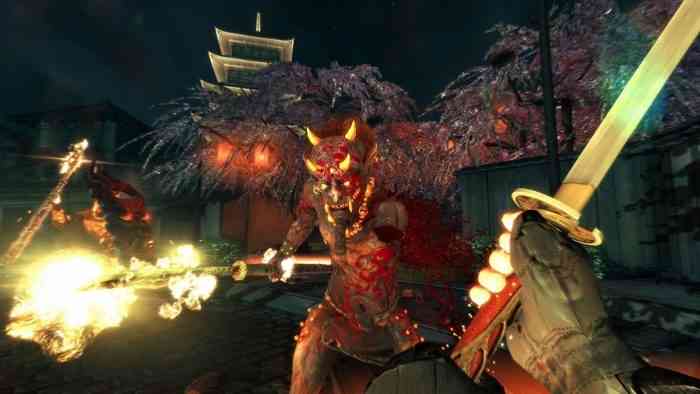 Side-missions are also an excellent playground for experimenting with the different weapons you’ll stumble upon. Instead of a predefined arsenal, Shadow Warrior 2 has taken cues from loot-based action role playing games. By the end, you’ll have everything from devil’s claws to rocket launchers, and you can further upgrade them with boosters that apply secondary effects such as fire, ice, or poison. Certain enemies you come across resist some traits and are vulnerable to others, encouraging you to give each weapon in your arsenal a particular role. Because the game’s only restriction is a limit of eight weapons, figuring out which ones to use, where to place them, and what bonuses to give them really personalizes your loadout.

Technically the game’s an impressive step-up from its predecessor, with beautiful lighting, colourful environments, and satisfying blood and weapon effects. The weakest aspect are the character models which appear to be holdovers from the last generation, but you’ll be spending more time cutting them up into little pieces than observing their features, and when you are, they’re in first person cutscenes that are more about the cheesy dialogue.

Artistically the game is even more impressive with a wide variety in not just environments but also enemy types. Everything is here from demonic monsters to cyberpunk androids that bleed aqua. Levels are large and expansive with few barriers to stop you. You can even visit previous areas and free-roam to take care of enemies you missed or search for loot. Combine all of this with new-game+ options with the addition of co-op and you’ve got a package that for the asking price is absolutely worth it.
In-fact, it may even seem that there’s nothing wrong with this game. Great combat, levels, weapons, dialogue, environments, and replay value seem like a complete package. 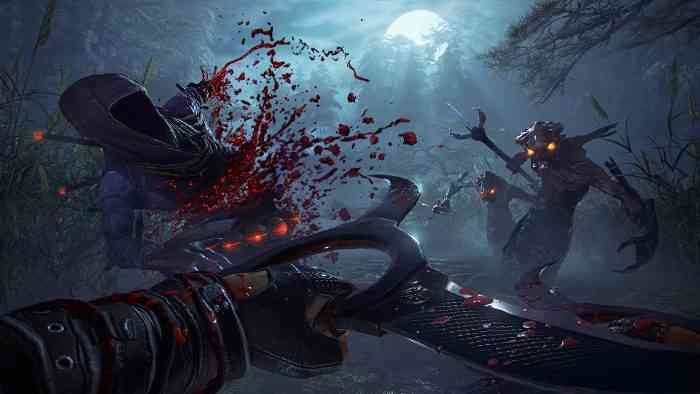 Unfortunately there are three major things holding back Shadow Warrior 2 from being superb. First, the game’s level and combat designs are top-notch, but the mission design becomes repetitive within the first two hours. The frequency of which you hike to a gate only to find out you need to get a key rivals Destiny’s Dinklebot Wave Defense. This applies to both story and side missions. Second, the game spews money with the frequency politicians spew bullshit. Within two hours I earned the wealth of DiCaprio, and after another two hours I was engaging in deals to purchase Belgium. Money is such a commodity in Lo Wang’s adventure, it comes to question why the game even has a currency system to begin with. Third, the game is too easy even on hard mode. You’re character being an amalgam of Sonic, DOOMGuy, Jackie Chan, and a mage means that you’ll rarely end up six feet under, and even if you do, the game retains the same respawn system from Bioshock and Borderlands with laughable punishment. The game’s hard mode is still enjoyable as I was constantly on the verge of succumbing to the enemy, but when the credits rolled, I realized that I could count all of my deaths on one hand, with two of those being when I fell off the map. I was unable to play the game’s co-op in time for this review, but if the difficulty on hard mode has no adjustments when with a friend, then you’ll need to handicap yourselves in some other way to make it a challenge.

To be fair, the decision to have your character respawn instead of hammering a game over screen in your face is clearly made to keep the speed and flow constant, I just wish there was more of a penalty for biting the dust. Ultimately though, Shadow Warrior 2 a is brilliant bundle of slice and dicing fun, and being that I’m someone who was massively unimpressed by Flying Wild Hog’s debut title Hard Reset, I gotta give credit to them for improving so drastically over just a few years.
No matter the price, Shadow Warrior 2 is more than worth it. Now who wants some Wang? 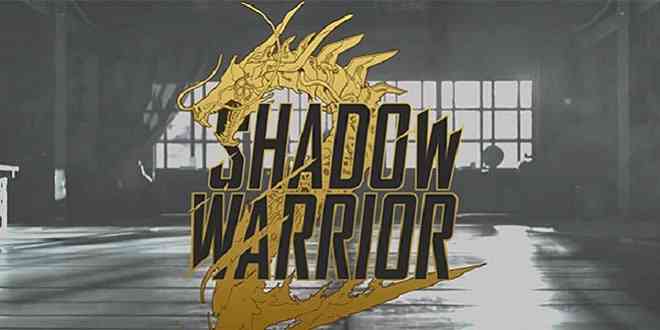 
Shadow Tactics: Blades of the Shogun Is Free in the Epic Games Store for a Very Limited Time

Shadow Warrior 2 brings Ultra-Violence to Xbox One and PS4