Shadow Warrior 2 brings Ultra-Violence to Xbox One and PS4

Is there really such a thing as too much violence when demons are involved?

Devolver Digital and Flying Wild Hog have announced today that their hugely popular katana-wielding first person shooter, Shadow Warrior 2, is now available digitally on Xbox One and PS4. The game is making its move to home console after a successful launch on PC late last year, and for a limited time Shadow Warrior 2 will be available on console for a discounted price of $34.99 USD and come with a ported copy of the original game, Shadow Warrior. Check out the launch trailer for Shadow Warrior 2 below:

Shadow Warrior 2 is an over the top first person shooter, combining traditional weapons with serious ninja skills and some outlandish ultra-violence. Players will take on the role of Lo Wang, a smart mouthed corporate shogun, who wields a combination of guns, blades, and magic to take on demonic forces that overwhelm the world. It looks absolutely fantastic and is definitely worth checking out, especially with the bonus copy of the original game. 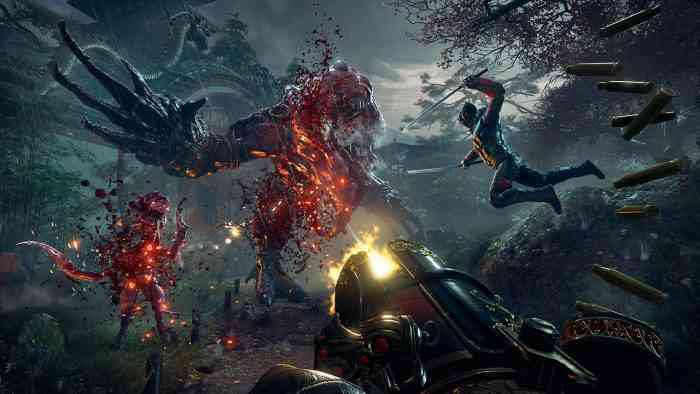 Michael Szustak, studio Director at Flying Wild Hog said : “Shadow Warrior 2 is a huge accomplishment for our little team and a new benchmark for the series so we hope that both our fans and new comers enjoy Lo Wang’s latest misadventures.” Shadow Warrior 2 originally launched for PC and GOG on October 16th of last year to very favorable reviews. We here at COGconnected gave it an 85/100 for its excellent combat and open-ended level design. (Check out our full review here) For more information on Shadow Warrior 2, check out the official website.

Are you excited to bring this over the top violence to home console? Let us know what you think on Facebook, Twitter, or the Comments section below.

Escape From Tarkov Patch Introduces Long Awaited Map And More
Next
Head Back to Vietnam in Tripwire’s Rising Storm 2
Previous
Blizzard Teases New Content for Overwatch With Upcoming Anniversary Event, as Animated Shorts Are Coming Back for Season 2