Phoning Home Review – These Parts All Make One Functioning Robot

I often think about worlds very different from our own, exploring alien planets, and what society might look like if robots took over, so I felt right at home playing ION LANDS’ first game. In Phoning Home you play as ION, a robotic explorer that has crashed onto an unknown organic planet. An open world exploration game that tasks you with surviving long enough to, well, phone home, ION LANDS delivers a game of components that, while sparse on their own, combine to make an enjoyable experience.

ION is a robot made for exploring, so you don’t have a killer laser but the ability to gather resources and a thruster for mobility. Upon exiting your crashed ship, you find yourself on a lush planet full of strange plants and wonderful vistas. Phoning Home is incredibly atmospheric with the variety of its landscapes, changing weather conditions, day to night cycle, and stellar sound design. Your ship’s AI, TR2, does a lot of the worldbuilding for the story through voiced dialogue. TR2 expresses distaste towards organic life, calling roots horrifying as they “gnaw” and “drink” from the planet’s soil, and fearing seeds as they are “biological bombs” able to “create a whole new tree”. Your home planet seems to be entirely robotic and has the view that organic life is inferior and dangerous. However, ION soon meets another ship’s AI, nicknamed “Sister”, who has views that are contrary to TR2’s. She calls ION and mobile exploration units in general “exploiters”, noting that they destroy planets while hollowing them out for resources. Alongside Sister and companion character ANI, who unconventionally value family, beauty, and humor, you all must work together to find a way home.

“ION LANDS delivers a game of components that, while sparse on their own, combine to make an enjoyable experience.”

The game is mostly open world, in that its environments are typically large open spaces for ION to explore and plunder for resources. However, the quests you are given are linear, with little to no sidequests to speak of, so advancing the game is fairly straightforward. Phoning Home largely consists of resource gathering, which is simple enough — once you first discover a resource, it appears on your compass so you have an easier time of finding more. The only challenging part of this is discovering the resources in the first place and struggling with the game’s platforming when climbing over rocky hills. ION glides over the planet and rockets up cliff sides through a finicky thruster. The thrust is delayed, so you will often find yourself blasting into the side of rocks or off cliffs instead of where you need to go, wasting precious fuel and health. Phoning Home also suffers from a generally low framerate, exacerbating platforming issues as the game lags. This can be improved by turning visual quality down to Low, and fortunately, this does little to diminish Phoning Home‘s splendid environments. Alongside resource gathering, the game also has a simple crafting system that isn’t anything special, but it gets the job done. ION can craft upgrades for itself, weapons and tools, and the necessary items to advance the game. Phoning Home also limits the amount of resources you can pick up at a time, which is a blessing in disguise as I would have spent the whole game hoarding seeds and mushrooms. 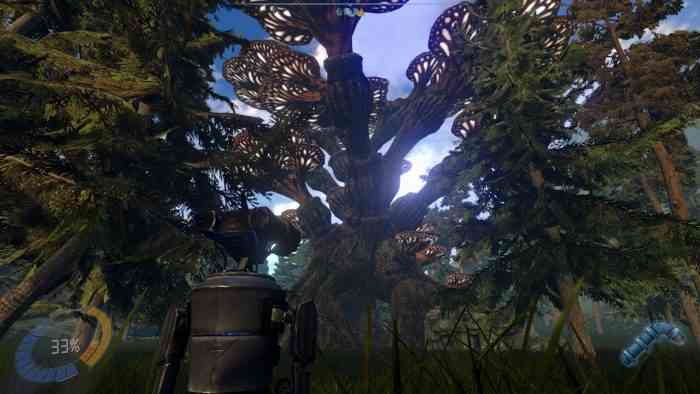 Resource gathering absolutely goes hand in hand with ION’s survival as the materials you gather power the robot’s gun, heals its wounds, and fuels it. You can play conservatively, carefully platforming to minimize fall damage, avoiding conflict to reduce depleting ION’s ammunition, or limiting jumps to save fuel. Or you do the complete opposite and play the game like I did. All of these actions require items crafted by resources found in the game’s environments and striking a balance here turned out to be more challenging than I anticipated, adding a strategic aspect of ensuring ION’s survival.

The game refreshes itself when companion robot ANI is introduced, alongside new partner mechanics. The puzzle solving aspect of Phoning Home once revolved around getting ION to the places it needed to go, but now includes transporting a robot which does not have a thruster nor physical defenses against harsh environments. Her strengths lie in her colorful commentary (ION cannot speak), role in driving the plot, and combat ability, which surpasses your own. I was wary of having to “babysit” a companion at first, especially as you have no direct control over ANI and must trust her to follow you. For example, to move ANI over large distances, you must create temporary portals for her to walk through on her own. Remarkably, ANI walks through them promptly once you create it. In fact, she only refused to go through a portal when I had accidently placed it too high, making it physically impossible for her to reach. Alongside helping her stick by you, since ION is a robot made for exploration and ANI is not, you are tasked with seeing that she survives this planet and its hostilities, from shielding her from corrosion and repairing integrity damage to ensuring her happiness. While taking care of a companion character is often cited as annoying in games (and in parts of Phoning Home, it was no different), ensuring that ANI sticks with you serves as an ongoing puzzle. Now, the player must think more strategically about how to navigate the terrain by considering ANI, and this is one of the game’s greatest aspects. 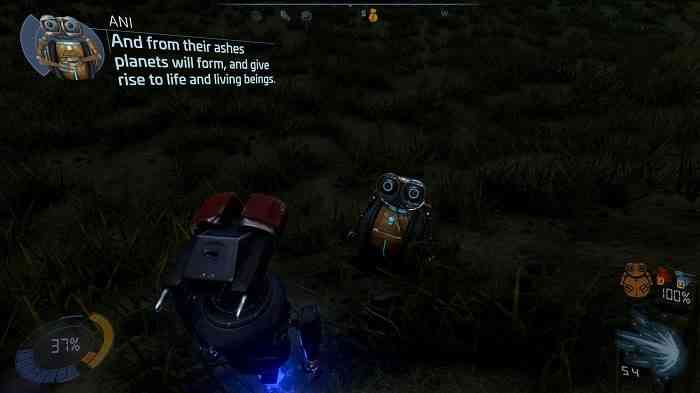 Another strength of Phoning Home is the charm of its character interactions. TR2, ANI, Sister, and ION (to an extent) all have their own backgrounds and vibrant personalities. The establishment of each of their backstories was remarkably well done through dialogue and the short logs in ION’s journal — with just a few comments from TR2, we can imagine ION’s home planet of robots and scavengers, and fill in the blanks ourselves. We see conflicts regarding their culture as Sister voices her beliefs, and witness change as TR2 gradually adapts some of her thoughts. This is all accomplished through incredible sound design — the robots beep and boop, TR2 and Sister are beautifully voiced and speak through thunderstorms or great beasts roaring at you. Phoning Home develops its characters and worlds simply, but effectively, and it is always interesting when one of your companions chime in.

Phoning Home manages to balance all of its mechanics, creating a game worthy of attention. The game’s different aspects of resource management, puzzle-solving, platforming, and story development may be individually sparse, but they all come together to make a modest title that doesn’t overwhelm the player. Overall, despite its technical flaws, Phoning Home is an unassuming yet enjoyable experience.

Devolver Digital Valued At $950,000,000 In London Stock Exchange
Next Nioh Review – A Visceral & Challenging Contender for Game of the Year
Previous Induction Review – Fun With Paradoxes