Nioh Review – A Visceral & Challenging Contender for Game of the Year

Nioh, the latest game from Team Ninja has arrived, wearing its influences proudly on its sleeve. Team Ninja took the core mechanics of Dark Souls and Bloodborne and added their own unique twist on combat and exploration to deliver what is undoubtably going to be a game remembered when talking about the best of 2017. After a couple underwhelming Ninja Gaiden games in recent years, it’s great to see the team deliver on their potential. Welcome back Team Ninja. We’ve missed you.

Admittedly, Nioh didn’t make the best first impression on me in its first twenty minutes or so and this is solely down to how closely it mimics its influencers upon first glance. Nioh offers magical shrines as safe havens where you can upgrade skills and swap gear in peace. Enemies drop experience called Amrita when killed. Your collected Amrita is lost when you die but can be retrieved by returning to your place of death. Nioh’s challenge and punishing nature also asks for patience from its players instead of charging into areas blindly. Sounds familiar, right? In its opening moments, it appears that Nioh is a straight Dark Souls rip-off with a new Samurai coat of paint but after delving deeper into the game, Nioh revels itself to be so much more than that.

“In its opening moments, it appears that Nioh is a straight Dark Souls rip-off with a new Samurai coat of paint but after delving deeper into the game, Nioh revels itself to be so much more than that.”

The story has a simple set-up in that William, our blonde haired western hero is wronged and sets off from London after breaking out of prison, adventuring across ancient Japan in pursuit of his enemy. While William himself isn’t fleshed out as much as I would have liked, the fictionalized dark fantasy world in which he inhabits is always interesting thanks to the injection of real-world historical personalities, including Hattori Hanzo, that aid William in his efforts and it all builds to some awesome climactic moments of action.

Where Nioh sets itself apart from those it mimics is in its combat and campaign structure. Nioh’s combat is a multilayered, fast paced experience that right from the outset, offers the ability to mix up your attacks and combos in a way that feels more akin to Team Ninja’s first incredible Ninja Gaiden efforts than Dark Souls. This is mostly thanks to the three different stances available, the more twitchy, light weight feel of combat and the well balanced Ki system. With the press of R1 and a face button, William can switch between a high-stance, mid-stance and low-stance. Each needed to be used in order to make affective fodder of your enemies. High stance deals the most damage but leaves you more vulnerable to enemy attacks and also uses up much more Ki. Mid-stance is a well rounded option, allowing you to hold back multiple enemies at once with its more sweeping sword movements. Finally, low-stance is the fastest option, allowing you to dodge and roll around enemies with a series of intense and quick slashes. While low-stance deals the least damage, it also uses the least Ki energy. Enemies can and will also mix up their stances during a fight. So watching and reading their tactics and reacting accordingly with my own mix-ups in stance always kept me on my toes. That Ki system I mentioned is William’s stamina and something that needs to be managed for success just as much as utilizing the various combat stances. During a combo, as your Ki depletes, you can tap R1 during a short window to replenish some of your KI energy with a Ki Pulse. The better you time it, the more you replenish, allowing you to engage in slicing and dicing your enemies to bits for a longer period of time before having to retreat back and re-organize yourself. These systems all work well together creating a visceral, exciting and rewarding combat system. Not to mention, cutting off limbs and beheading enemies, as morbid as it sounds, never gets old. 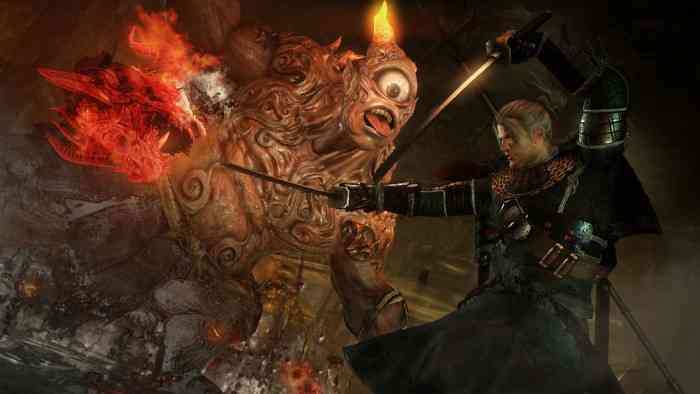 There is so much more to Nioh than first meets the eye. Ninjutsu skill trees are available to unlock not far into the game which open up even more combat possibilities like being able to unleash a powerful kick at the end of a combo which staggers enemies, opening them up to a deadly final blow. You can add Shuriken and other throwable objects to your arsenal of ranged abilities. And each weapon type can be evolved into a more deadly and affective tool. This isn’t even including the options available through forging of stronger weapons. Guardian Spirit options open up too, allowing William brief periods of invulnerability and powerful, “living weapon” attacks that deal incredible damage.

“There is so much more to Nioh than first meets the eye.”

Enemies and bosses are another highlight to Nioh. There’s a satisfactory amount of enemy variety which includes multiple levels of samurai, skeleton warriors, crawling zombie like beings and other various types of Yokai, the demons that inhabit the world of Nioh. Each offer their own unique challenges. The Yokai range in size. Some the size of a large lion, others towering over William with intimidating attacks that can send you back to a shrine defeated with one single attack. The Yokai can also open up mystical swirls of energy around them which disable Williams ability to regain his Ki. This adds another layer to the great combat scenarios previously mentioned. You can simply avoid these areas entirely or you can clear them from the battleground with a perfectly timed Ki Pulse.

The boss fights of Nioh were a mostly a positive affair. While the boss fights can be very challenging at times the sense of accomplishment when you finally take a tough one down is incredible. Each of them offer their own twist in order to take them out as well and once you realize what that twist is, their defeat becomes easier but no less satisfying. One example of many; The gelatinous water demon boss you’ll eventually face can be quickly ran to and tackled straight up but I found out through exploring the level that torches I came across off the beaten path corresponded with four fire pits in the boss area. Light all four torches in the level and the four fire pits in the boss area become engulfed in flames, allowing you to imbue your weapon with fire which aids in taking down the boss. Elements like this are used to great effect throughout the world of Nioh and always made me want to explore each level to its fullest. 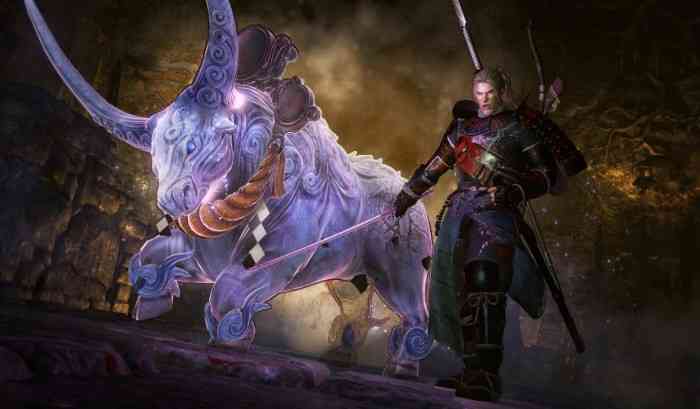 Fully exploring levels is not just about finding possible boss exploits though. Secrets areas with higher level weapons and items are worth finding and there are also multiple hidden Kodama creatures to guide back to shrines, which offer unique bonuses when found such as gifting additional Elixir replenishments after death.

While levels offer branching paths and numerous secrets to discover, the campaign structure itself is much different than the games it pays homage to. Nioh is broken up into stand alone levels, which can be returned to via the world map. While the size of some of the levels may disappoint those expecting a sprawling interconnected world, they no less deliver an interesting backdrop to the action and plenty of reasons to revisit areas. Each level has a main mission as well as a sub-mission or two. These sub-missions mix up how you traverse levels and offer unique challenges like clearing all the Yokai that are terrorizing villagers. These sub-mission often also change the time of day from the main mission, giving the level a new feel and color palette. Not only that, after completion of a zone, Twilight Missions become available which offer an even greater challenge – and equally greater reward – for those brave enough to tackle them.

“But know this; Nioh is an incredible action RPG game that should not be missed.”

What Nioh also does incredibly well is blend intense and serious tones with at times light-hearted and silly moments. This deft balance of historical authenticity and far out there fantastical elements is never not entertaining and Team Ninja should be applauded for their ability to combine it all into a believable and engaging world.

There is so much more I could talk about when it comes to Nioh, though a big part of the fun and experience of Nioh is discovering things on your own. But know this; Nioh is an incredible action RPG game that should not be missed. Offering well balanced and visceral combat, engaging environments to explore, challenging bosses and well over 80 hours of exciting content to enjoy.

“Let Me Solo Her” Will Stream 1000th Victory Over Malenia in Elden Ring
Next Linelight Review – Minimalistic Gameplay, Loads of Style
Previous Phoning Home Review – These Parts All Make One Functioning Robot