SUDA51 is like the Johnny Rotten of the video game industry. Laced with controversy, his rebellious nature is evident throughout each unique creation. Whilst teetering the thin line between genius and madman, he managed to find mainstream success with the No More Heroes franchise which brought R-rated violence to Nintendo’s family-centric console: the Wii.

After an 11-year hiatus, Grasshopper Manufacture has brought Travis Touchdown back to the main stage but will the Beam Katana sporting, crude punk resonate with a modern audience?

Eight years prior to the events of No More Heroes, Damon, a young child, ventured into the woods only to find a strange alien creature. After caring for the larva, a friendship blossomed, culminating in the safe escape from investigating FBI agents and return to his home planet. Twenty years later, Prince FU reemerges, accompanied by a swarm of ferocious aliens. With Damon’s stature in society, he concludes that Earth is ripe for the taking. Upon witnessing the invasion, Travis decides to intervene. With his middle finger proudly in the air, he has to climb the Superhero rankings, slaughtering FU’s motley crew, in order to save the world.

SUDA 51’s influences are poured throughout the entirety of the game, resulting in blood-soaked segments that gloriously jump between genres. At its core, No More Heroes 3 is a hack and slash adventure. With weak and strong attacks, you can combine inputs to create a cacophony of violence. Whilst slicing and dicing enemies, you will have to keep an eye on the charge status of your Beam Katana. Once depleted, you will need to recharge the weapon by either shaking the JoyCon or oscillating the right stick. Although it can stifle the flow of combat, it forces you to consider the number of strikes, deterring spam-based gameplay. 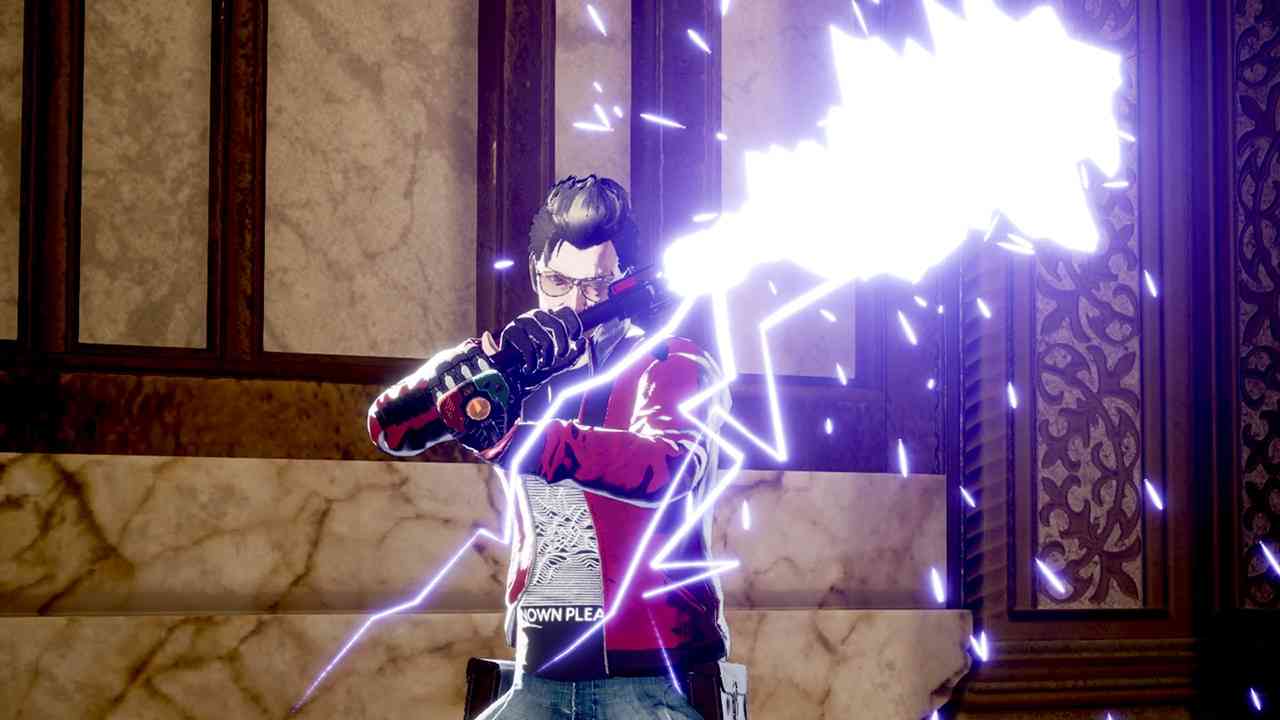 The Death Glove, which was introduced in Travis Strikes Again, is a customizable special attack that adds a layer of strategy to combat. With several foes to deal with at once, you can use the Death Glove to manage distance and isolate enemies. Due to the variety of creatures at hand, you are required to learn attack patterns in order to decimate adversaries. Evading is a vital technique to master, not only will this ensure safety, but it also grants a slowdown giving you a window of opportunity to counter. At these points, stars may appear above your opponent’s head giving you the chance to perform a grab move.

As if taken straight out of the WWE, Travis can execute killer suplexes that can leave enemies on conscious. At the climax of battles is the Killer Slash, which presents a slot machine-style reward system. Each finisher is followed by three icons that can give boosts to help you with the rest of the fight. This casino theme continues throughout as upon death, you are given the opportunity to revive or gain a boost on your next attempt with a spin the wheel mini-game. After clearing an area you are greeted with an ultra stylized finisher that accentuates the visceral violence through the trails of blood against a jet-black background. Each dance with death is scored based on the variety of attacks, resulting in rewards that can be used for upgrades.

From Out of Space

Polarising the melee-based combat is the Gundam-style space sequences. With a large opponent as your focal point, you must weave in and out of oncoming hazards and attack weak spots in order to ensure victory. However, No More Heroes 3 doesn’t just stop there, you will also be required to chase down villains on an Akira-style motorbike, mow lawns and unblock toilets in this diverse and thoroughly entertaining escapade through the warped mind of SUDA51. 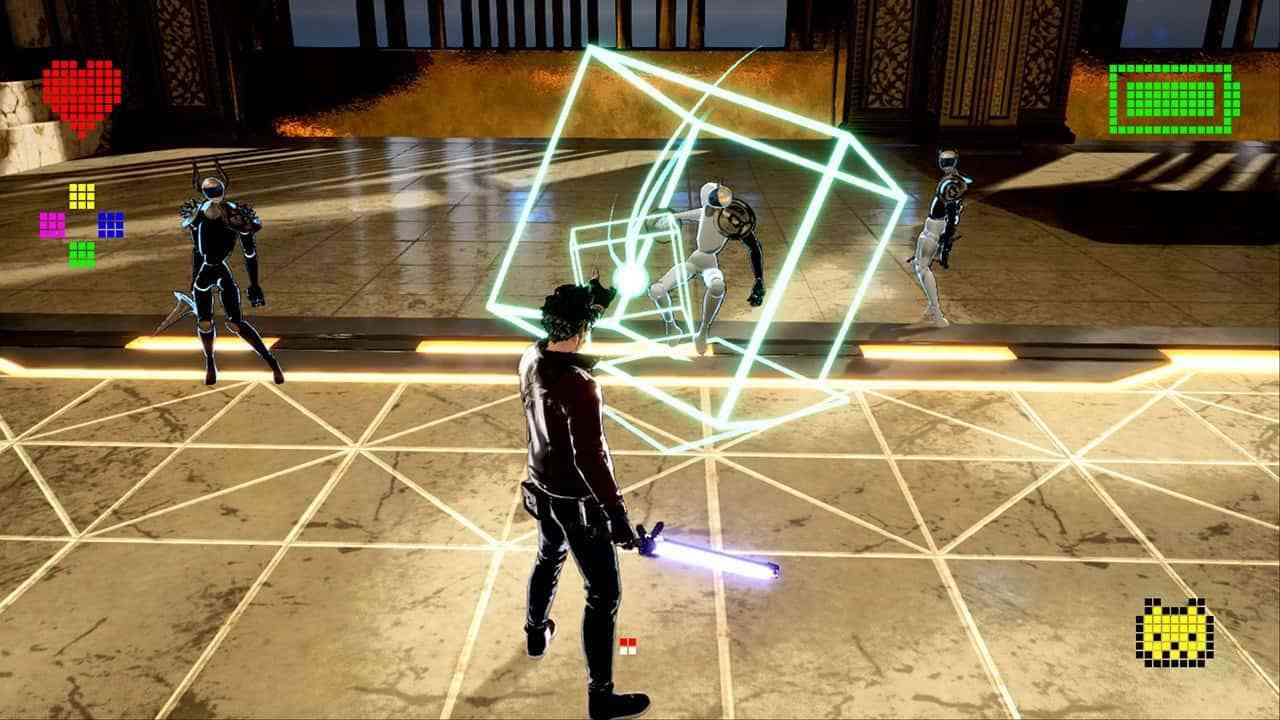 Presented as a TV series, each villain has their own episode, complete with an opening title sequence and credits. The antagonists are unique, all possessing distinguishable quirks that ensure scenes are humorous and memorable. Boss battles are a highlight of the game. Fights are distinct, requiring you to consider your approach, read attacks and counter in order to succeed. Throughout, sequences are constructed in a deliciously stylistic manner that emulates filmmakers such as Robert Rodriguez. From over-the-top, retro-inspired, 8-bit text to the black and red, Sin City-esque kill frame, each aspect has been planned in order to create an aesthetically pleasing experience.

Episodes follow a similar pattern, wherein you peruse around a barren open area, completing battles and earning money to compete against the next person on the Superhero Ranking board. Even though each location offers a range of arcade-style mini-games, the structure of every episode is pretty much the same. Unfortunately, these sections suffer from performance issues. Whilst arena-based fights are slick, maintaining a steady frame rate, the open areas have assets that pop in and an inconsistent frame rate, making roaming the streets a chore. This was particularly evident in the Call of Battle environment, which included a hazy visual effect to replicate that of a VHS. The combination of these elements made the section appear quite muggy and amplified the issues.

No More Heroes 3 is absurd, silly, and ridiculously fun. With its slick aesthetic, accentuating the deep and smooth combat, Grasshopper Manufacture has managed to surpass previous entries in the franchise. Packed with a ton of mini-games, this diverse trip will take you to strange and wonderful places. Although the empty open-world areas are plagued with performance issues, it doesn’t take away from the ingenuity that is imbued within. 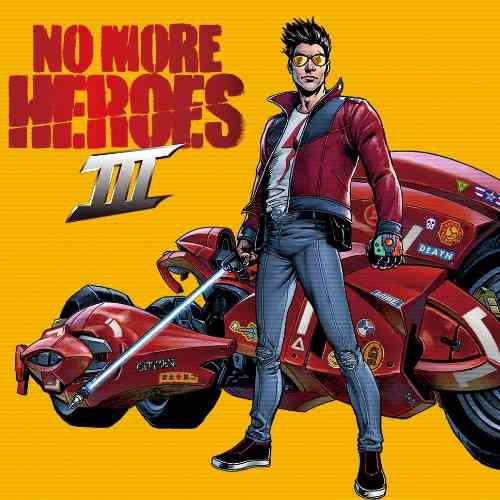