Exploring the galaxy means many things to many different people. Are you seeking out wonder, awe, bloody conquest or total harmony? Maybe you want none of these things. Maybe you just want to relax, to lose yourself in the peaceful rhythms of a pastel, low-poly universe. If for some reason, that last answer speaks to you, then Morphite is going to be right up your alley. Traversing the galaxy has never before been so calming.

Morphite is the story of one young woman’s search for the elusive element after which the game is named. You control Myrah Kale on her journey, scanning various life forms and fighting off various others. You trade in scans and minerals for upgrades to your suit, your weapons, and your ship. Though the story portion of the game is confined to fifteen planets, there are many other worlds to explore. A person could spend a serious chunk of time just putting around, harvesting scans on worlds dyed in every color of the pastel rainbow. And why wouldn’t you? The name of the game here is chill. Traversing these worlds, whether in service of the story or not, is infused with a relaxing pace that assures you things are going to be fine.

“Given the limited toolset at play here, I found the various worlds to have a surprising amount of personality.”

Every world is defined by a couple of key elements. The primary determinant is climate. The planet’s temperature decides what sort of environments will greet you when you land, which in turn influences what sort of flora and fauna you encounter. If the planet is too hot or too cold, you can’t even explore said planet without extra protection installed. As you upgrade your suit, you’ll find yourself able to endure more and more extreme locales, be they boiling or frozen. Enemies become less threatening with every new upgrade you acquire. Before long, your most serious adversary will be the environment itself, along with whatever puzzles you discover. The alien life you find is all somewhat predictable after a while, whereas a good puzzle can always kill you. Toxic waste, sheer cliff sides, bubbling lava. These are things a fancy suit simply can’t compete against. Every world can feel somewhat similar, though this is more about the low-poly graphic style, rather than the underlying level design. Given the limited toolset at play here, I found the various worlds to have a surprising amount of personality. 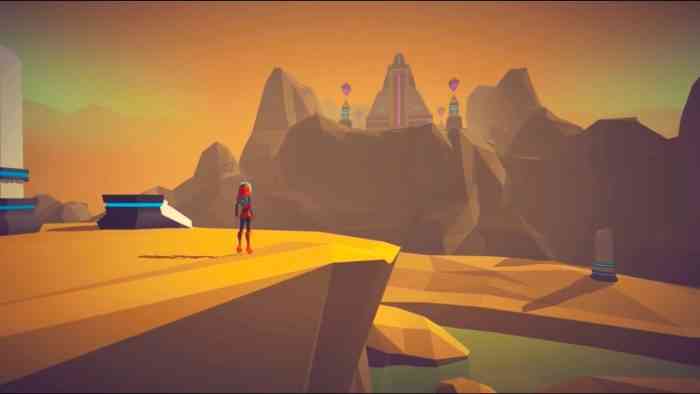 What I had a harder time with was the cycle of gameplay. You land on a new world, scan everything you see, snatch any mineral deposits lying around and fight off a few aggressive locals. Combat and exploration are fun enough, but scanning is insufferable. There are a few caveats, however. Scanning is, for the most part, an optional activity. If you really hate it, you almost never have to do any scanning. It’s possible to progress through a significant portion of the game without selling any scans, or at least without selling very many. The upgrades to your gear are useful, but not essential. You also don’t need to do any optional planetary exploration. Those fifteen story worlds can be your only destinations throughout your journey. Yet, without engaging in either of these non-essential activities, it feels like a major portion of the game is left untouched, like the experience is incomplete.

Crafting upgrades, beyond their necessity (or lack thereof), is a relatively streamlined process. You have to find stations for weapon and suit upgrades on various planets. It stings a bit to have this central feature tied to a procedurally-generated portion of the game, but this gives you time to acquire materials between stations. It never felt like I was in a rush to get the next level of upgrades. I was always pleasantly surprised by the discovery of another upgrade terminal, rather than relieved. Unfortunately, this lack of urgency comes at the cost of utility. None of the upgrades feel necessary. Sure, you can make your plasma pistol even stronger, but most monsters are pretty harmless. The only thing I rushed to correct was the amount of ammo I could keep on me. Everything else is nice, but not needed. Most boss monsters can be overcome with a little strategy, rendering extra firepower a luxury rather than a need.

“Morphite is a game with exactly as much depth and complexity as you want there to be.”

Wandering from world to world is so relaxing, in fact, that it made this review a little difficult to finish. I never felt like making progress was super important, because my moment-to-moment experience with Morphite was so laid back. You find a new world, explore until you reach the boundaries, scan what looks interesting and fight whatever wants to eat you. Along the way, you take in the atmospheric music and the pastel polygons, marveling at how they form a microcosm never quite reproduced on any other planet. If you’re more of a goal-oriented gamer, this routine may feel somewhat empty. There are ways to fight this off, of course. You can explore the space stations set up in every solar system, grabbing side quests that flesh out your planetary excursions. For myself, I ended up with a huge list of side missions that I never bothered completing. I would just get distracted, wandering around the galaxy and finding new life to catalogue or kill. Although it’s nice to know there’s more to do if you’re so inclined.

Morphite is a game with exactly as much depth and complexity as you want there to be. If you’re a completionist, you can explore every corner of every world, scanning and salvaging until you’re rich. If you just want a satisfying story, you can stick to the fifteen planets wherein that story takes place. You can either max out the upgrades or never bother with them once. When you encounter hostile forces, you can run, bargain or fight your way out. This game gives you the freedom to engage with its systems to whatever degree suits you best. While I wasn’t always blown away (some of the voice work sounds like it was recorded through a series of tin cans), the game’s flaws aren’t enough to dispel my recommendation. The slow, easy pace of this game will either be a source of condemnation or a point of pride. People have spent a lot of time comparing this game to No Man’s Sky and Metroid. What you have here resembles neither of those things. Instead, think of Morphite as a relaxing journey through a beautiful, pastel galaxy. What you discover and what you get out of it is mostly up to you.