Waking up in a Martian colony, Moons of Madness engineer and protagonist, Shane Newehart (the protagonist) is tasked with navigating the halls of an infested biodome that has tentacles that would be comfortable in an H.P. Lovecraft book and teleporting demons that give off exorcist movie vibes. The game features no difficulty slider and most things will kill you in one hit, though the enemy AI seems to give you plenty of opportunity to escape. Despite a lot of the enemy monsters being tentacles, most of them feel unique. One is scared when you look at it and retreats, but when your back is turned, it strikes. There are different types of bipedal tentacle monsters that patrol the dark hallways that connect one biodome to another or they chase you into flooded ventilation shafts that also harbor tentacle lifeforms. Initially, these plays out like a dream sequence, eventually culminating in a birthday setting full of red balloons familiar to Stephen King’s It. It isn’t long before these nightmarish Lovecraftian dreams become Shane’s waking nightmare.

Moons of Madness doesn’t rely on jump scares, rather it implements them to add to the psychological horror of the game. The combination of darkness and orchestral music is something that would be familiar to most horror movies just as games such as Outlast and Dead Space use to great effect as well. Red and white lights flash as shadows rustle away from you. Chasing the source is fruitless as the shadows you follow often walk through walls or disappear entirely. Some of the apparitions appear like other astronauts but they walk strangely, almost like zombies. Trying to get a hold of these beings is impossible but getting a hold of the tentacle monsters will almost certainly lead to demise while being chased by them leads to cold sweats and white knuckles. The combination of survival horror and psychological horror in Moons of Madness has led to multiple nightmares during my time with it and few survival horror games have had such an impact on me in recent years.

The occult symbolism is most prevalent in areas feature Celtic runes. One area, in particular, has an altar with a skull on it that has tentacles grasping an important book. Three slabs of runes need to be illuminated to release the imprisoned book but each rune requires solving a puzzle. One requires lining up photos in a sequence based on their timestamp while another requires having the images of four runes imprinted in your retina while running back to the altar to illuminate the slab. The puzzles in Moons of Madness feel unique even though the setup for them might feel familiar to other titles. Even if it feels like you’ve done the same puzzle in another game, this one finds a way to make each puzzle unique. 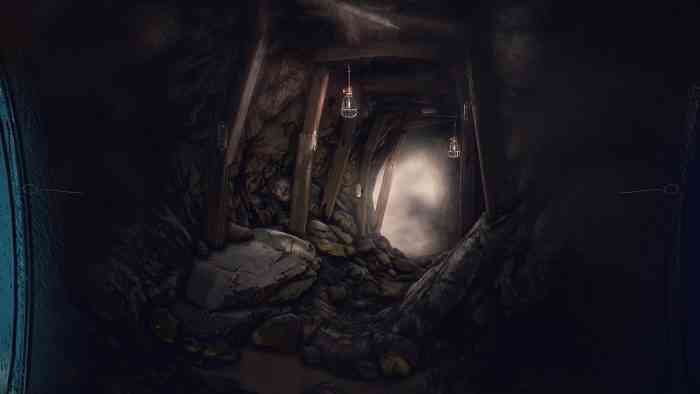 Power cells are this game’s version of keys as they’ll unlock doors, power terminals, operate machinery, etc. Some even unlock puzzles that unlock more important things such as communication towers, power conduits and irrigation systems. Another key is Shane’s ID badge which only has a level one security clearance, forcing you to locate better badges to gain access to new areas. Every action in the game feels intentional and important as missing one step in the airlock can have you gasping for air, filling your spacesuit with oxygen is essential as you traverse the Martian landscape and solar panels need to be rotated to transmit power back to the base. The oxygen mechanic is nothing new to gaming and I wish the system was a bit more fleshed out. A nice touch that Rock Pocket Games included with this title is as Shane gets more anxious, the actions that he’s repeated several times become more clumsy because of his fear as he’s trying to rush something that can’t be rushed or he’s not looking at what he’s doing. This is a subtle but appreciated touch to the game.

The Mind of an Engineer is Tormented on Mars

Moons of Madness draws upon the rich lore and mythology of Funcom’s Secret World Legends. The games exist in the same thematic universe but one isn’t a prerequisite to the other. Though Secret World Legends was a social experience, Moons of Madness is not only a single-player story-driven experience, but Shane Newehart is primarily communicating through a headset. He has a useful device that scans the environment, helping him hack computers, re-arrange circuits that have malfunctioned, rotate structures and get clues to the next objective. This tool is the primary item in Shane’s arsenal but as I proceed, I’m prying open doors with a crowbar and turning cranks with a ratchet to reduce the PSI of a pipe. This is a cosmic horror title like Dead Space and although Shane’s arsenal differs drastically from Isaac Clarke’s heavy artillery, I think it benefits the pacing of the story. Rather than being able to blow the Martian’s tentacly heads off, I have to strategically escape. One character that stays in touch with Shane seems actively against him and the others are mostly indifferent, making the solitary experience even more isolating.

No other game has really captured the helplessness and loneliness of space travel like Moons of Madness and the psychological themes explored are drastically complimented by the horror elements. The lighting and music blend with the disturbing noises produced by the tentacle monsters similar to Jerry Goldsmith’s work being played alongside the infamous Alien Xenomorph. There are several glitches in the game, most of which are visual and because of the psychological aspect of the game, it could almost be played off as part of the story. It’s just awkward when I’m able to walk through a wall or I try to walk up a staircase and instead end up inside the staircase. This is especially awkward when I’m not supposed to access the area because it’s blocked off until later in the storyline. There are multiple times the rover travels through objects, structures, etc. when on route to the next location. It’s worth noting that these rover segments are on autopilot so I’m pretty sure the developers wanted you to see the rover go through these objects. The glitches really add to the confusion that Shane Newehart is likely experiencing so in that sense, the game also feels like an RPG.

The puzzles occur slightly too often between plot points, some of them slightly take the immersion away because something intense is supposed to be happening but it’s on hold while I solve a puzzle. These moments are few and far between though as most puzzles feel like they serve a purpose rather than like they’re thrown in at a random point. The attention to detail in the interior decorating of the Martian colony is staggering, with notes littering rummaged areas and space food in the kitchen alongside a coffee machine which has no limit to the dispensing volume. My biggest complaint about the game is that Shane seems to walk too slowly but runs too fast, making traversing Mars cumbersome whether inside the structures or not. Though Moons of Madness isn’t the first game to do so and it likely won’t be the last, it’s a survival horror experience that succeeding in giving a grown man nightmares, which is something a zombie game just can’t do.