It was already a decade ago that audiences were first introduced to the movie Zombieland and its hometown-named heroes. It became a surprise hit and it took all this time to return to Zombieland for a sequel. In that time, the leads became more famous, wrangled in awards, became A-listers, and was a horrible Lex Luthor. Now that Double Tap, the aforementioned sequel, has hit theatres, a tie-in game was attached to go along with it. I’m unsure how familiar our readers are with tie-in games, but they’re usually as bad as the video game to film adaptations. Zombieland: Double Tap -Road Trip is a top-down, dual-stick entry into the world of Zombieland that lives up (or down) to tie-in standards. Other than the tried and true mechanics of the genre, Road Trip offers not much more and does a poor job of trying to capitalize off the buzz generated by the movie.

Road Trip takes you to various locales in Zombieland as you take on the mantle of the heroes of our story, including unlocking the new ones from the Double Tap movie. Each character has a unique quality to help you out, they each wield different weapons with different efficiencies, and each character has a special move to help you out of those situations when you are overrun by the undead.

The gameplay, as well as the controls, are your classic twin-stick shooter and they work pretty well in that regard. It’s easy to run around the map shooting zombies, even as the zombies grow in numbers. If you can find 3 friends to play with, I’m sure you’ll have an adequate time shooting zombies while Woody Harrelson utilizes audio snips transplanted from the movies. The thing is, you’ll have to convince 3 friends to play with you. If you can’t, the enjoyment drops significantly if you’re playing by yourself, because the levels are annoyingly difficult. The ever increasing horde makes it a lot harder to do tasks if no one can watch your back. The Horde part of the game falls directly into the same category. If there are no teammates, you will not get very far, regardless of how accurate you can shoot. 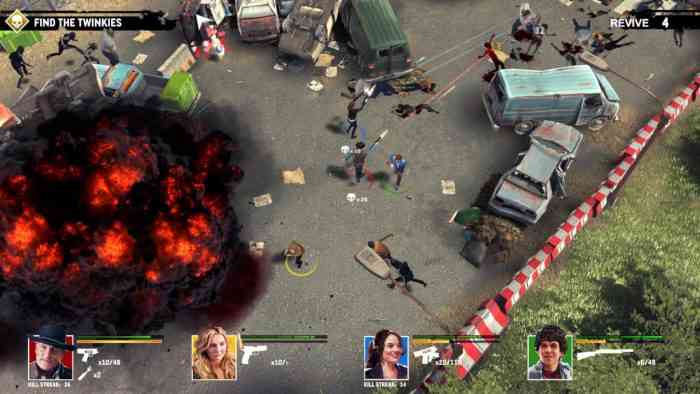 The graphics are underwhelming, which of course do not help anything either. When talking about top-down games, I’m sure we can all name a bunch that we love. The one that comes to mind for me are the Baldur’s Gate games. Know why? Because that’s roughly the graphical output you’re looking at. Even on the home screen when they make actual avatars, they look like the statues you see in celebrity wax museums that leave you saying, “If I didn’t know who this was supposed to be, I’d be lost”. This brings us to, unfortunately, the best part of the movie tie-in – the celebrity appearances. While these are always hilariously bad, Road Trip strives to take the cake with badly-timed subtitles and a desperate attempt to capture the charm and humour that made Zombieland popular. It simply falls flat and the game falls on its face.

The reason why Zombieland was popular was because it was quirky, the characters were charming, and it was hilariously meta (I’m looking at you, Bill Murray). The makers of Road Trip try to recapture that glory but they seemed to have missed the part about how the characters made that movie. Much like how the phrase ‘Nut up or shut up’ was already tired by the end of the first movie, Road Trip is tired even as it boots up. So much so that most of the dialogue given to Tallahassee is that phrase that has been worn out for a full decade. Luckily, Double Tap itself was much better than its game counterpart. Based on historical examples, this isn’t the first time nor will it be the last time we can make that statement.