I knew I was in trouble in Six Ages: Ride Like the Wind when my tribe’s children started to conjure fire with their minds. Don’t get me wrong, having a few pyro-kinetic soldiers is just what I needed to turn the tide of my war with the Blue Arrow tribe, but can you really trust kids with such a destructive power? Despite the urging of the elders, I decided to keep the kids around, but gave them a stern warning that they needed to wait until they were of age to use their abilities. It went about as well as you’d expect.

Such is life for the horse tribes of Elmal. One day you are clearing land for grazing, and soon you are preparing for war with a neighboring tribe. Inevitably though, you are interrupted by stone men, or ancient dragons, or the armies of the scorpion folk. I can’t say I am proud of all the choices I’ve made, but life in the Black Eel valley never gets boring.

Six Ages: Ride Like the Wind is the long, long awaited sequel of 1999’s cult classic King of Dragon Pass. In many ways, it is the same game with a sleek new coat of paint. Years are divided up into turns, called seasons, and you must choose what your primitive tribe does in each season. There are building projects, war parties, mythic quests, and lots of sacrificing cows to your many revered gods in exchange for magic favors.

Into The Great Wide Open

Then, at the end of every turn, you are given a page from a visual novel. These are gorgeously illustrated by David Dunham and his team and look just like an illustrated Hobbit edition I read as a kid. Each crisis comes with multiple choices, and how you resolve it will have ramifications for your tribe, the valley, the world, and the mythic cosmos.

As a visual novel with management aspects, the game is heavily focused on decision-making, and it is both unique and highly enjoyable. You’re not alone in your decision-making process though. Your clan is led by a Clan Ring, seven elders with strong opinions stemming from their belief systems. My clan leader was decisive and compassionate, but sort of a dummy when it came to organization. Another advisor was an elderly woman who loved archery contests and hated men. A third advisor worshiped the trickster Raven spirit and usually gave awful advice- but sometimes her ideas were crazy enough to work. 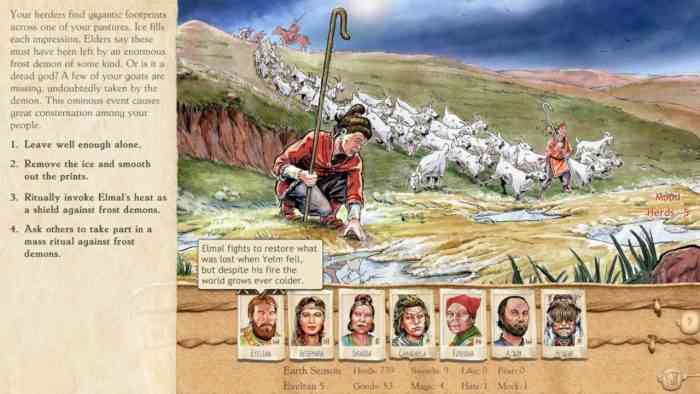 You learn to love your Clan Ring. Not as beloved friends, but as terrible characters in a wonderful fantasy story. They bicker, get married, perform miracles. They die. Your Clan Ring is a big part of the way you experience this well-realized world. And I do mean it when I say the setting is thought out. Glorantha is a fantasy setting that has been around since 1975 and used for various board games, tabletop RPGs, and the occasional video game. It’s as vivid as any fantasy setting you’ve ever visited, and more imaginative than most.

Because the gods have such a powerful influence in Six Ages. The tribes of Elmal worship a great many of them, but turn their backs on the Orlanthi pantheon, worshipped by the Ram People of the South. This is where Six Ages really gets exciting as a sequel. Sure, there are some changes from the 1999 original. The illustrations no longer look like they were rendered for DOS. Some of the interface (particularly the one you use to explore the map) are much easier to use. But what really makes this game cool is that you are playing the villain – sort of!

How the Turn Tables

The “horse spawn” was the derogatory name given to the antagonist northern raiders in King of Dragon Pass. Now, in Six Ages, you are the horse spawn, and the people from the first game are the feared Rams, who worship a god who once brutalized your pantheon. While never focusing on it, the game makes a cool statement about tribal divisions and point of view. An important part of both games is Hero Quests, where you send members of your tribe to reenact stories of myth. The closer you get to walking in the footsteps of a god, the more powerful the magical rewards are.

The Orlanthi stories contradict the legends of the horse clans. Sure, everyone reveres Uryarda the Goat Mother, but the storm tribes view your gods as the aggressors. The horse people never forgave the Orlanthi for crimes that may have been committed before man ever walked the Earth. By committing to the wonderful setting, Six Ages has more to say than a dozen fantasy RPGs.

Balance the Books with Empire of Sin: Make It Count