Monster Train (Switch) Review – All Aboard

After a successful year of Monster Train gracing PCs, it’s finally come to the Nintendo Switch. Utilizing a unique, almost tower defense-like system in which you protect levels on a train car from hordes of enemies, Monster Train has captured the hearts of card game enthusiasts far and wide. And it isn’t hard to see why. Taking clear inspiration from Slay the Spire, developer Shiny Shoe has honed in on a winning formula, combining the best bits of several genres to create pure deck-building bliss. 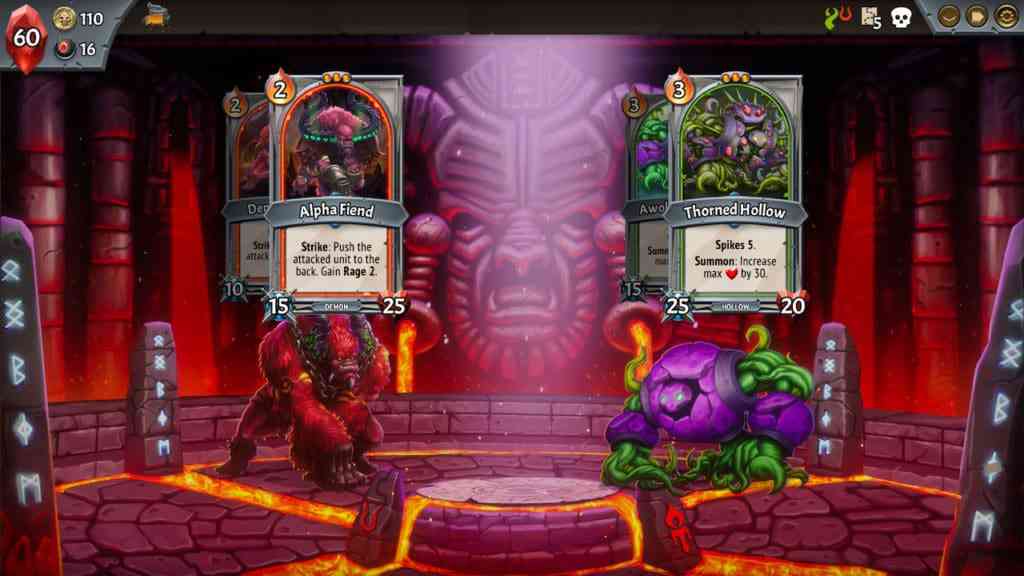 Monster Train isn’t going to win any awards for its writing. Come to think of it; I only have a loose understanding of what’s going on. But that’s just fine. Hell has frozen over, and now it’s up to you to deliver Satan’s new central heating unit. Or something like that. All you need to know is that, to survive, it’s imperative to defend the train’s “Pyre” during your trip.

The way in which the train itself is made part of the strategy brings Monster Train’s first distinctive quality into the spotlight. It’s your job to defend four separate cars, with three of them being open to you and your cards. The fourth car, positioned at the top of the train, houses the previously mentioned Pyre. If you let your foes reach the top and destroy the Pyre, it’s game over. I’ve never been much into tower defense games, but Shiny Shoe has wisely plucked the most addictive part of the genre and sprinkled it into Monster Train.

Once you’ve punched your ticket and climbed aboard, you’ll have over 300 cards to choose from to help get you back into the Devil’s warm embrace. Any great deck builder is created around a philosophy of synergy, and Monster Train is no different – the real joy of the game is discovering new combinations of cards that turn you from a peasant to a god. And helping to keep things fresh is that each card can be upgraded along the way, making previous strategies deemed unviable suddenly effective. It’s an exciting system that helps to eliminate the dread of getting “bad” cards. 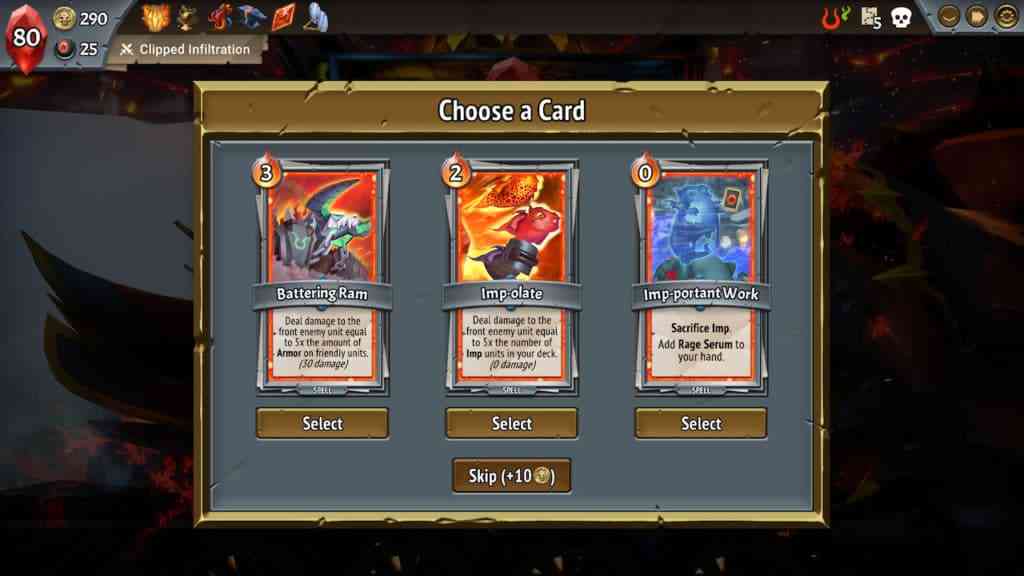 Similar to Magic the Gathering, you’ll want to ensure you’re making use of cards designed for each other. The decks will have what’s called a “Clan” associated with them, equating to the different color-types in Magic. Six different Clans will provide the player with hundreds of hours of content. And with ten different ranks to work through for each of them, Shiny Shoe does make a valiant effort to keep things interesting. But, in addition, it’s also what they do between rounds that works so well.

Unlike Slay the Spire, Monster Train isn’t shy about telling you where to go next. The system for selecting your next path works similarly; you pick from two different tracks that lead to different rewards and then a battle. But I’ve yet to encounter a situation where I’ve failed a run simply because I wasn’t able to assess my circumstances properly. Don’t get me wrong – it doesn’t hold your hand by any means. It’s just that Monster Train will reward knowledge and skill over luck more often than not.

What’s been less than rewarding, however, as unfortunate as it is to say, has been playing Monster Train on the Switch. It’s not terrible, but it’s hard to ignore one glowing issue that’s plagued my time with the game. For some reason, there’s no touch screen functionality. I think many would agree; card games are often the ones that benefit the most from a touch screen. So, you can imagine I was supremely disappointed to find that there was no such thing in the Monster Train port. 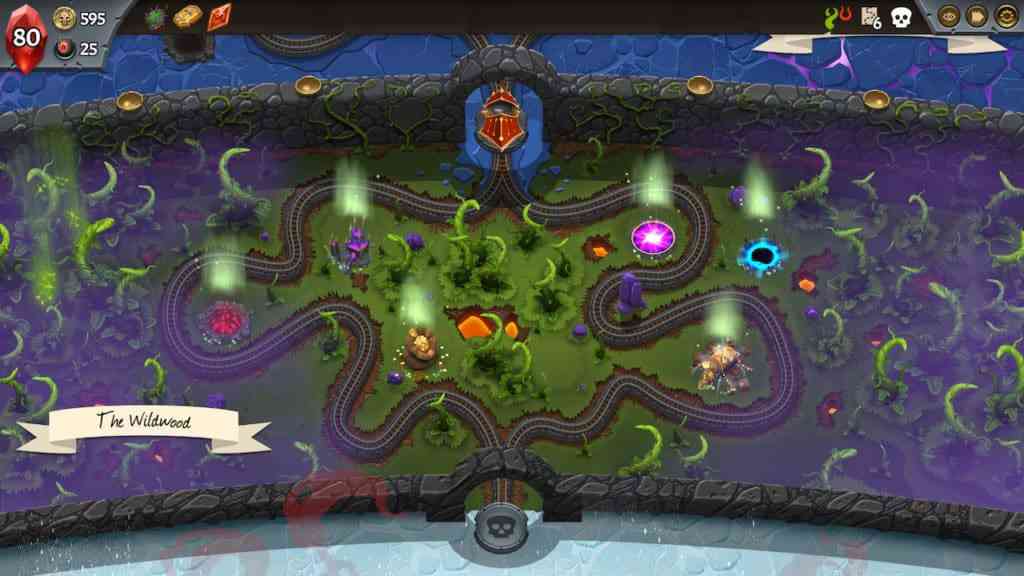 Other annoyances pepper themselves throughout the experience, but nothing that genuinely detracts from the overall enjoyment. Brief bits of lag will pop up every now and then, and the load times can be less than stellar. Minor audio hiccups will also occur, but at this point, I’m being nitpicky. Monster Train deserves your attention, and a few bumps on the tracks don’t ruin this ride.

I’ll be playing this one for a long time. After a dozen or so hours, I’m completely hooked. An impressive number of cards, enemies, items, and more to discover is going to keep me on this train, and the excellent visuals and music will help make the ride to hell… heavenly. It could use a patch or two, but Monster Train is a smash hit.

No Touch Screen
Minor Bugs
Can Be Overwhelming Early On 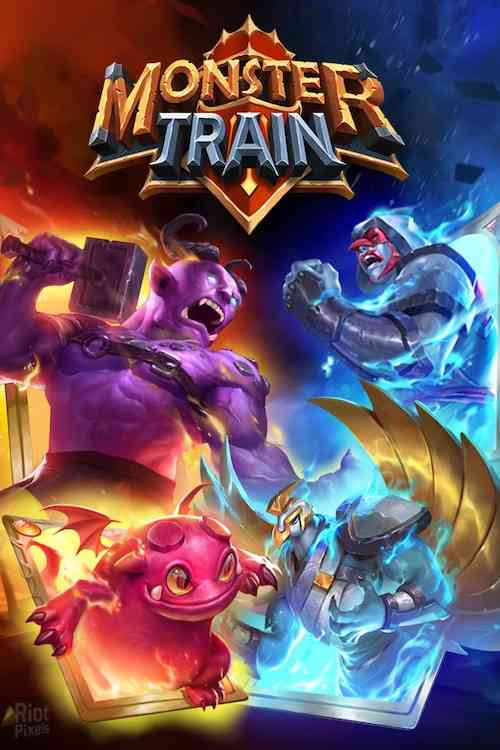