After playing the demo for Fracked, I was feeling very hyped for the game. Well, the full game has landed and my excitement was mostly justified. Fracked is fun, immersive, gorgeous, and polished. It’s Blood & Truth with full locomotion. But it’s also too short. You can finish the game in under 3 hours.

Fracked is one of the most polished VR games available for PSVR. All the controls are intuitive and designed to remove any barriers between the player and the virtual world. Starting with the weapons: you can reload and cock the gun, aim, holster, and switch hands on the fly. All actions can be done easily with the PS Move controllers. Taken in tandem with the duck and cover system, gunplay in VR has never been so easy and so fun. Take note though, shooting in Fracked is an aim down the gun barrel type of game. If you want that type of gunplay, check out PSVR Sniper Elite. In Fracked though, shooting is much more action-oriented and employs a shoot and spray style of gunplay. Which serves the action-adventure movie vibe the game is going for quite well.

The main knock against the weapons is the lack of variety. There are only two – a handgun and a submachine gun. There are situations where you temporarily get to use a shotgun or a grenade launcher but you cannot keep them. This is too bad, as the lack of weapon variety causes the shooting to become stale after a while. Your offensive options are further hobbled because there is no melee mechanic at all.

Fracked proves its claim of 1:1 scale the best for the cover system. Crates, barrels, doorways, and almost anything you can grab with your virtual hands allows you to take cover. The other grabbing mechanic that works wonderfully is the climbing. Being able to climb allows for vertical virtual world interaction. Fracked really puts this mechanic to good use with a set-piece that is more than a nod to a similar climbing one done in the second Uncharted game. It’s a good comparison piece to show how visceral a VR version of climbing with the threat of deadly fall compared to one done in a flat version. 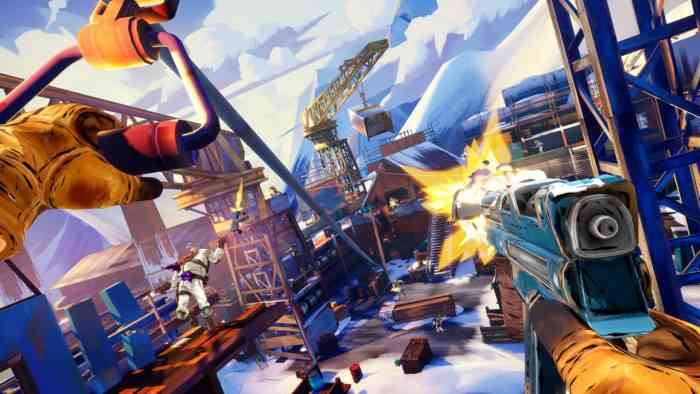 Besides climbing, there is also skiing and zip lining. Travel between locations is done by skiing and/or by helicopter. When skiing, you steer by tilting your head. This works well and allows you to keep your hands free for shooting and reloading. Enemies either pursue you in snowmobiles or await you in towers along the slopes. It’s quite a blast to pick your way down a mountain slope, skiing and shooting at moving objects or guards shooting from towers while trying not to get shot yourself. Blowing up snowmobiles and towers is a good time.

Once you reach an enemy base, besides running and climbing, you can also use zip lines. Fortunately for you, many of the enemy locations are peppered with them. This means you can swiftly traverse from one height to another while blasting away at enemies at the same time. A real blast!

Speaking of blasts, there are explodable containers peppered throughout the environments as well. Shooting them results in very satisfying explosions which fling enemies long distances. For the foot soldiers, this is an alternate method of dispatching them. For other enemies, you need the explosive containers to weaken or kill them.

Speaking of enemies, their AI is adequate. They tend to rush out in the open in their determined desire to attack you. This gives the game a wave shooter feeling at times, but this approach also forces you to keep moving lest you become outflanked by them. Your situational awareness allows you to see enemies moving around the level as yellow outlined figures when they close in on you. The game includes the requisite set of options to allow you to tailor it to match your VR legs. You can choose smooth or snap turning.

Fracked’s presentation is bright, colorful, and done in a cell-shaded art style that the PSVR excels at. The game looks like Borderlands VR on steroids. PS5 owners reap further benefits as the game is tailored to take advantage of its additional horsepower over the PS4 and PS4 Pro. The game utilizes dynamic resolution and runs at a faster and smoother frame rate on the PS5. The game is so clean-looking on the PS5 that the screen door effect is pretty well eliminated. 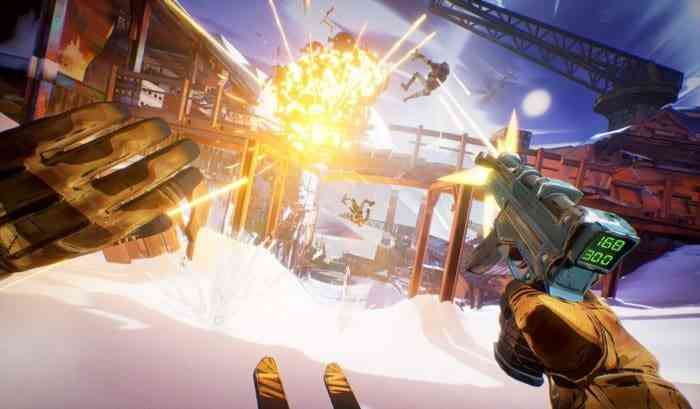 The voice acting and music are excellent. The story, on the other hand, is rather generic. Both the characters and story suffer from the game’s brevity, especially because of the rollercoaster pace of the game. There is little to no downtime, so you don’t any emotional connections to what is going on or how it is affecting the characters.

Playing Fracked is very enjoyable. The short length of the game leaves you with a sour taste, which is too bad because it is so entertaining to play. The environments are beautiful and the game mechanics and scale really immerse you in the virtual world. What also hurts Fracked is that the brevity of it is paired with a lack of replayability. There are no challenges or online leaderboards to compete against. There are coins to collect but you cannot use them for anything like say customizing your character or weapons. The top-notch production values make this a tight and exhilarating VR experience. Despite the shortness of the campaign, Fracked is a virtual action playground worth playing. 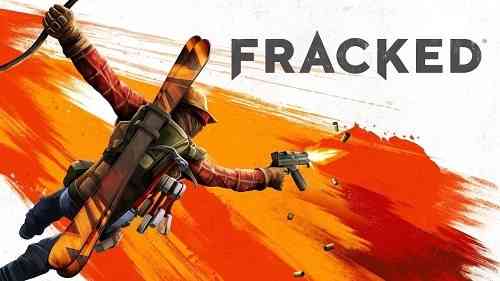