I have a confession: Monster Hunter: World is the first game I’ve played from the series. Fortunately, the game has been advertised as a good starting point to those who are new to the series, so I decided to poke in my nose and see what exactly this game is that caused so much stir in the industry earlier this year. Monster Hunter: World originally burst onto the scene back in January with its console release. A massive success, the game sold extremely well, becoming both Capcom’s and the PlayStation 4’s bestselling game. The game gained massive acclaim for allowing you and your friends to join forces in mercilessly destroying the delicate ecosystem that houses these beautiful animals, but until now you couldn’t do it with the satisfying clickety-clack of a mechanical keyboard. Yes, PC gamers have had to wait more than six months for the release of a port. At long last, the wait has ended, and the hunt begins.

Well, it does, and it doesn’t. Players are still going to have to sit through a ton of tutorials and the establishment of the story. This process is long and rather boring and highlights Capcom’s long-running trouble with storytelling. The result was me spamming the poor A-button on my controller until the three hours of text-based tutorials subsided. In short, the beginning is lackluster and slow and led to a lot of “Just let me play!” being shouted at my screen. Fortunately, after the three-hour mark, the experience improves dramatically. 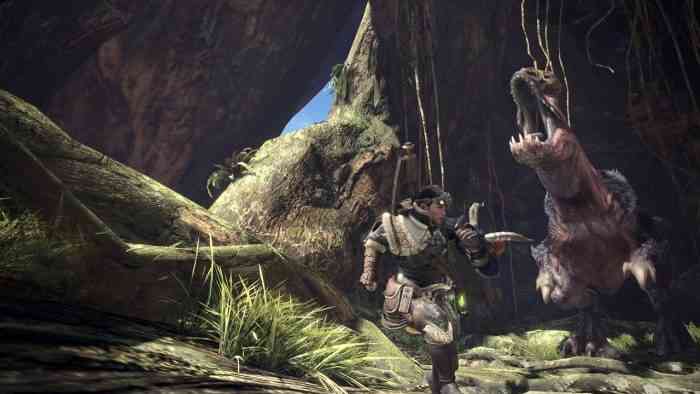 “Finally,” I thought, “I’ve got my weapons, I’ve got my cat dude, and it’s time to hunt some monsters!” And so I did. I ran around murdering everything that I suspected may have a pulse and sliced it up. Funny thing is, I didn’t realize another player had shown up in my game and had gone to actually complete the mission. What this means is that I finished my first mission without actually completing the task. I had previously heard about the prominence of online cooperative play, and I had felt that it was great that cooperation was being included, but this was the first step toward my feeling that the online play is intrusive and a burdensome on the rest of the game. I know that you can turn off a lot of the online aspects, meaning you don’t have to actually play with others if you don’t want to, but you can still feel the effects of the design decisions made to accommodate such a prominent feature. I was going to complain about how the time limit on hunts was an unnecessary feature that discouraged exploration, but then I realized that it likely serves to encourage multiplayer parties to actually work together and focus on the mission. I was going to complain about the inability to save while on expeditions and missions, but then I realized that it was probably because of the multiplayer aspect. I was going to complain about being automatically sent back to base sixty seconds after completing a mission, but then I realized that it’s another decision that’s probably meant to help with multiplayer functionality. The very worst aspects of the game for someone playing predominantly single-player are those design decisions meant to bolster the multiplayer. They’re forgivable issues, but still frustrating to the guy who wants to make a solo career of slaying monsters.

Speaking of careers, let’s look at our career monster-hunter protagonist’s journey. Or we could not. The story is stylistically awesome, but it may not be worth thinking about it too hard. It’s not really the focus of the game either. The focus is where it should be: Hunting big scaly beasties.

The Bigger They Are…

After learning to maneuver the game’s twisted intricacies, Monster Hunter: World is really quite fun. It looks fantastic and has a great sense of style, and it’s a game about hunting giant freaking monsters. What more do you want? The combat itself is interesting. For the uninitiated, a group in which I was firmly positioned prior to my time with the game, the combat is clunky and slow. Savagely spamming the quick-attack button with no regard for what’s going on around you will get you killed. These monsters are, after all, monstrous. Trying to tank blows during a frontal assault is about as likely to succeed as actually trying to rush a dinosaur. Instead, the player should think more technically, as Capcom seems to have looked to its Street Fighter roots for influence. The result is a complex combat system with innumerable combos ranging from basic slashes to flamboyantly deadly twirling, and all of these combos work slightly differently with each member of the game’s large weapons catalog. This combat system is what took me from wishing I had a fast-paced Dinosaur Dark Souls game (don’t get me wrong, I still want that) to seeing and appreciating the special spirit behind Monster Hunter: World. The game exudes the soul of Capcom. The same soul you can feel in games like Resident Evil 4. That soul that sometimes means having a poor user interface, shoddily written stories, and misguided game design, but also means that the game is probably going to feel really good once you’ve “got it.” Admittedly, I haven’t “got it” with Monster Hunter: World yet, at least, not really. My gameplay is still clunky and rough, but the times when I do land my combos tell me all I need to know about what I’m working toward. The learning curve feels steep as Mt. Everest at times, but when you think about why people climb Mt. Everest, it all makes perfect sense.

So, do we judge the game by its sale’s figures? Is Monster Hunter: World the best game Capcom has ever made? I don’t think so. What it is though, is a damn good time. In the event that you find yourself in possession of both a powerful desktop and $60 that just can’t wait to spend, give it a shot. For all its flaws, Monster Hunter: World is proof that a game can be more than the sum of its parts.