I grew up on the back end of the nineties, playing several popular games systems and genres from the time that would lead me down a path that kept me gaming for years. Yet, deep in the roots of gaming, there was one genre I barely touched — the “Point-and-Click” genre. Games like The Curse of Monkey Island and Day of the Tentacle. I dabbled later in a few playthroughs, reviews, and even some old text-based games like Zork, but I had a feeling I was missing a piece. So, with the tantalizing tidbit of an adventure like those I’ve heard so much about, I had to take the bait. Unavowed looks and fits the part, providing a throwback to those days dragging items to solve puzzles. With recent greats like Thimbleweed Park, the bar was set high. Would Wadjet Eye Studios clear it? Let’s find out.

Unavowed takes us to a grungy, noir-like New York setting, putting us in the shoes of a bartender, a cop, or an actor. Things go bad fast as the game dives into the tale you choose, influencing how some characters treat you and how you’ll interact with the world moving forward. The game makes you really feel the role you chose — for example, I chose the cop profession at the start, and the game gave me access to a few more investigative dialogue options and solutions.

It’s hard for games of this day and age to make our choices feel meaningful, yet Unavowed delivers several moments where you’ll be asking yourself what the right choice is. However, only the major choices such as sparing a life feel like they hold weight. At many moments in the game, the dialogue will flow towards the same goal without much divergence despite your choices. However, these moments do not take away from the overall narrative due to Unavowed‘s lovely cast of characters. Your motley crew of supernatural detectives can consist of two of four possible members, each with their own strengths to offer for you to use. The player is not punished for taking one person over another, as all puzzles can be navigated with any team. 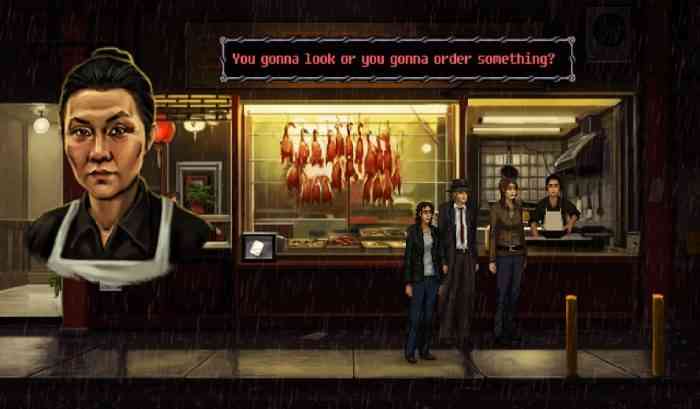 There are a few gripes to be had, mostly due to the game’s ending. I have completed two endings and both left me wanting for more. The final act of Unavowed falls apart just a little bit and will leave you yearning for a better conclusion, especially given that a while back a major twist will have left you bewildered.

When you hear the phrase “Point-and-Click” it tends to bring up thoughts about mindlessly sitting around and clicking things with your mouse. For the most part, this is true. Many P&C adventures, Unavowed included, can feel like they lack the entertainment value of other genres, often relying solely on their story and puzzles to keep you playing. Walking, interacting, and speaking are all controlled by the mouse buttons, with the right mouse button acting as a skip feature. You’ll find yourself impatiently mashing the right button as you walk from scene to scene to traverse faster. It can and will get you into trouble, as being hasty can find you missing dialogue and storytelling. This doesn’t help the game’s length, which even with my desire for every drop of dialogue only net me about 9 hours. Luckily, the game’s save system lets you save anywhere you like under any name, making for easy reloading should you miss something you wanted to hear.

If puzzles are the lifeblood of P&C games, how do Unavowed’s brain teasers fare? Many are well thought out and a joy to solve. However, for every good puzzle, there is one that falls flat, requiring the specific use of a specific item in a specific place, as these games usually do. It can leave you stuck on a certain screen or area until you find the correct combination and can become frustrating after a while. Even late into the game, I ran into one of these, and it can leave you feeling less than intelligent when you find that one tiny piece of the setup you had missed. In-game hints from party members can also be either incredibly helpful — too much so —  or too vague to be useful. However, Unavowed manages to make the pointing and/or clicking interesting by letting you use your party members’ abilities. As previously stated, any puzzle can be solved with any member available. You’ll find yourself gleefully engaged most of the time, despite the frustrations.

It’s been a popular theme as of late, no? Games with pixelated or downgraded graphics tend to tickle the nostalgia bug in most of us. Unavowed strikes a good balance with its art; its sprites are crafted well and look like they’d be at home in an old LucasArts game, but the game manages to keep itself in check and provide a pretty picture to look at. Some characters and animations can look awkward and strange, but for the most part, this does not take away from the game.

While the voice acting is enjoyable, some of the lines are poorly mixed, resulting in oddly displaced clips that feel unfinished. Some sound effects, like the fire and gun sounds feel like stock sound effects, while others sound poorly recorded and out of place. For example, the rain sounds like a running shower. However, Unavowed‘s soundtrack does not fall prey to these issues; it is well done and worth a listen. The audio and graphics blend well together and provide a great sensual experience, issues notwithstanding. 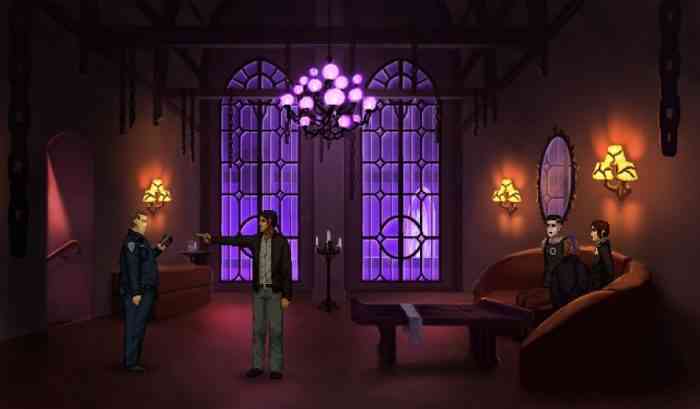 When you boil it down, Unavowed takes the tried and true formula of the Point-and-Click game and uses it as a stage to talk about humanity. Technical problems and gripes do not sully what was a great experience. Unavowed is worth a play if you’re interested in the genre, and Wadjet Eye Studios might just be a team worth watching for the future.