So far, all of the gaming headsets I’ve used, and reviewed, have been of the standard two-eared variety. So, the LucidSound LS1P Premium Chat Headset is a new experience for me — a headset that has only one single earcup. It’s a design that has always struck me as a bit odd-looking, even awkward, but after using it I can definitely see it being useful for certain gamers.

For example, say you want to do some gaming but also pay attention to what’s going on in the room around you; that is actually a common situation for me. Maybe I have to keep an eye on dinner, or listen for the doorbell — whatever. In those scenarios, having your right ear uncovered, free to hear what is happening outside of the game, makes the design of the LucidSound LS1P a bit of a plus over traditional headsets that might “cut you off” from the outside world a bit too much. Personally, I have found it useful for use during evenings at home, giving me the ability to play on my laptop and not be totally oblivious to my wife if she says something to me.

It Gets the Job Done

I am guessing that this is, of course, not the “official” purpose of the LucidSound LS1P’s single-earcup design. The “chat” part in the name implies that this is a headset meant for chatting with fellow online teammates during intense co-op play sessions. Players in this situation would likely want to just listen to the game sound through their TV, and don’t need a headset to deliver first-class game audio. They just want to stay in sync chatting with their squad. Again, the LucidSound LS1P will fit the bill nicely. And the “premium” part is the fact that this unit offers at least some of the high-class features of full gaming headsets, like a nice sleek design and a bit better quality sound. 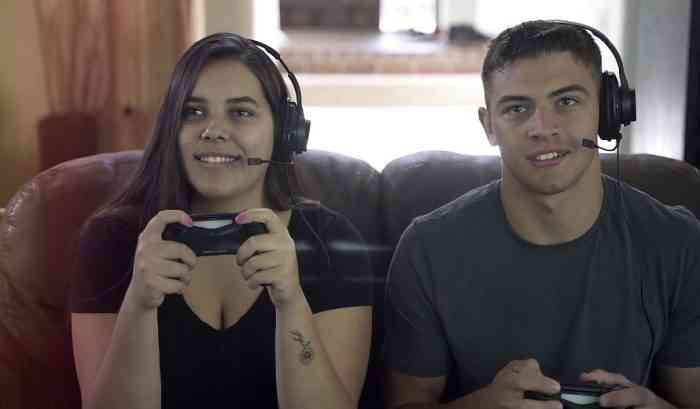 If you’re looking for decent sound, by the way, this little headset can hold its own surprisingly well. It’s got 50mm audio drivers, just like LucidSound’s other headsets. However, unlike a unit like the LS10P, which I just reviewed, the LS1P has openings in the earcup that let sound escape into the surrounding space. So, in other words, this is not a noise-cancelling experience that will isolate you from your surroundings; it is purposely designed so that you can hear both the virtual game environment and the real-world environment you’re sitting in. It also doesn’t have the deep bass and full range of a true noise-cancelling gaming unit — and obviously no stereo. As long as you’re looking for sound that does the job but prioritizes voice chat noise over game atmosphere, then you’ll be quite happy with the LucidSound LS1P.

A major upside, though, no matter what kind of gamer you are, is the incredibly light weight of this unit. I guess that is one very big advantage brought by removing one of the two earcups. Weight is a crucial thing with headsets; any unit will feel just fine at first, but the weight of the headset multiplied by the time played makes for increasing discomfort inevitably. Thus, all units will eventually get uncomfortable on your head — it’s just a matter of how long it takes. The LucidSound LS1P has a big advantage in this regard, with such a minimal, unimposing profile that it is one of the least uncomfortable I’ve worn, even after hours of use.

Another comfort factor I really liked was the LucidSound LS1P’s over-the-ear design. What that means is, the earcup does not press on your ear but rather goes around it. This makes for much less soreness on your earlobes — which anyone who has used a lot of on-ear headsets will know all too well. Plus, the lightness of the cups and the soft, imitation leather pads make only the gentlest of pressure impact. Put it all together, and the physical experience of using this headset for long periods is a much more pleasant one than many I have used.

Controlling the sound and volume is done with the same, simple method LucidSound employs for its other headsets. A big dial on the earcup turns, allowing you to adjust volume level easily. There’s no searching with your finger for the tiny little button, or pressing the wrong one, either of which can be difference between (virtual) life and death in a game. You also simply push the button in to mute the mic. LucidSound’s line of products all benefit from one of the best headset control designs in the industry and the LucidSound LS1P is no exception.

Some things I definitely don’t like though. The boom mic, for example, isn’t detachable. If you break it, it’s gone, and you can’t take it off for travel or storage. The headset is also connected with a cord — which is fine in theory as wireless is a bit overrated in a headset anyway — but the thing I don’t like is that the cord is built-in. That means you can’t switch it out with a longer one, or a better one, and that is a big downside for me. I imagine that I would wear it out or break it eventually as well, and again there’s no possibility to replace it.

In the final analysis, you have to also take into account the LucidSound LS1P’s low price. Right now, it’s a very affordable $16.99 on Amazon. That makes it much less expensive than a full gaming headset. You could say that you’re getting half the earcups but as I’ve said above, that might be an advantage depending on what you’re looking for. With solid sound and an easy, comfortable experience, the LucidSound LS1P Premium Chat Headset isn’t quite a Premium experience but it is a nice little alternative to traditional gaming headsets.

** A review unit was provided by the manufacturer **