Recently I had been feeling an itch to annihilate demons, loot demonic vaults, and to just tear Hell apart in general. Lucky for me, Darksiders Genesis was slated for release in just a few short days. Genesis, being my first ever game in the franchise, left me both impressed and disappointed simultaneously. Don’t get me wrong; this is an excellent top-down hack and slash game that cured my itch, though some technical issues left me feeling frustrated and confused at times.

War and Strife, two of the legendary Horsemen, have been given incredible power, and are tasked with maintaining balance between Heaven and Hell. War employs more reason and loyalty in his decision-making, and Strife comes off as slightly hot headed, and greedy. This dynamic between the two characters works very well to help propel the entertaining and engaging story forward. The two Horsemen’s ultimate goal is to find Lucifer, and stop him from looting Eden of many ancient and powerful artifacts. You meet many demons along the way, some helpful, and the rest just want to kill you. I was perfectly okay with this as my main goal was to mow down as many foes as possible. All things considered, if I hadn’t known any different, I wouldn’t know there were other titles in the Darksiders series and this can absolutely be played as a standalone game.

You will have the option to switch between two characters seamlessly while you play, and to utilize their unique play styles to conquer your foes and the environment. At first, I was worried I would heavily rely on War’s giant sword, Chaoseater, to just crush as many demons as possible and obliterate everything, but I quickly learned that it was necessary to use both War and Strife in unison in order to progress. I found War was exceptionally useful for clearing large groups, but Strife is much handier when working on a tougher enemies and bosses, as his long-range capabilities are necessary in certain situations. I am glad the game was created in a way that requires you to get familiar with both characters, because all too often I fall back on one character, and I enjoyed the duality of play-style. Apart from battle, each character is equally useful when solving puzzles. They both have unique skills that are required to progress through gates, portals and the like. The puzzles are certainly challenging, and I found myself having to accept defeat on certain sections, committing to come back and solve them later. The character progression section is slightly confusing at first, requiring you to slot creature cores in to strengthen your abilities, but it is something that is easily learned. I appreciated the depth of ability and character progression, as it is sometimes under-utilized in other games similar in style and price.

Not All Rainbows and Butterflies

We’ve come this far, and you might be thinking “hey, this sounds pretty good so far!”. You are correct in that the gameplay and storyline are great, but let me talk about the technical issues I have experiences with the game thus far. Jumping in this game does not feel as solid as I would like it to. Somehow it feels inconsistent and traversing the environment is just difficult. A jump will sometimes result in getting caught in an invisible wall type of scenario, and this can be a death trap when battling a boss or mini-boss. Similarly, the right stick aiming mechanic can initiate itself at times, causing you to slow down (you also lose your main attack abilities), and this is extremely frustrating. The game is quite unforgiving in its nature, so making it even more difficult with these continuous glitches is working against the overall experience.

The in-game area map does not actually show you your character’s exact in game position, instead it is just a highlighted area that you are currently in. I understand why this choice was made, to try and reduce the linear feel of the game and require more exploration, but again I found this frustrating. I spent a lot of time comparing nearby landmarks to the map to try and figure out where I was, where I was going, and also hunting down all of the precious upgrade materials. Is this because you can’t move the camera and look at what’s around? 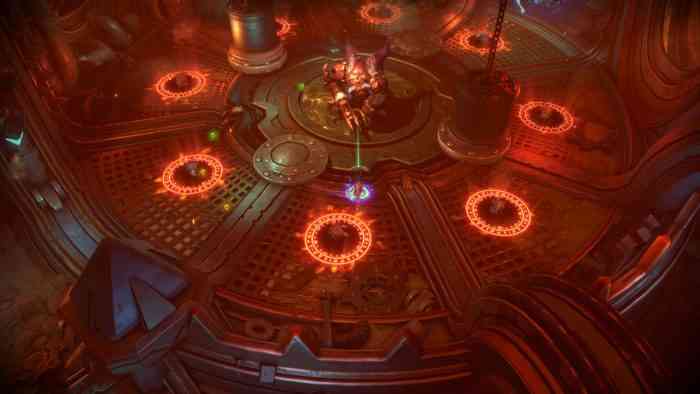 I played Genesis in the Single Player mode mostly, and in this mode you can control both War and Strife, and switch between them as you like. Some tougher boss battles had me wishing for a partner because they can be pretty challenging at times. Due to this, I decided to call upon a friend mid-way through a dungeon for a little bit of a boost. This turned out to be quite the ordeal, as the friend invitation system is not explained really well anywhere, and we spent a good chunk of time trying to figure it out. Eventually, we were ready to play the dungeon, only to figure out that it’s only possible to play co-op if the other player is at the same spot in the campaign. Rather bummed out, we proceeded to just play the first two missions relaxed and I never got the help I needed with the dungeon. This area of the game could use some extra work to simplify it, and to allow for quick co-op play also.

Utilizing the Unreal Engine, Genesis looks fantastic, especially for the hack and slash dungeon genre. I kept getting feelings and reminders of Diablo III in terms of gameplay and the overall visuals of Hell and the Void where the majority of the game takes place. The impressive visuals are complemented with fitting and epic music, along with great sound design. The voice acting was also very well done, with diverse voices for all characters, and it definitely added to my overall experience. This all comes together to offer a great experience for the senses, giving you a feeling of power and confidence when controlling these super-powered Horsemen.

When we circle back around, taking in all of these points, I think Darksiders Genesis has a really solid base, is greatly entertaining, and is definitely worth its price tag. The previously mentioned technical flaws can (hopefully) be addressed in future updates, and I would then have little gripe with the game itself. If you are a Darksiders fan, or simply want to feel the power of slaying demons left and right, I would definitely recommend picking this title up.

*** A PC code was provided by the publishers for review ***