LucidSound LS10P Headset Review – A Harmony of Quality and Affordability

Gaming headsets are now offered in a dizzying range of types and price ranges, making for lots of availability on one hand, but also a daunting decision process on the other. Deciding on which headset to buy can be tough, so it really comes down to how much quality you want versus how much you’re willing to spend. With that in mind, the LucidSound LS10P is one recent offering that checks off a lot of the boxes for an affordable price.

Quality in a headset is often determined by the materials used to construct it. While the LucidSound LS10P is made of plastic, it’s a good, durable plastic that feels like it’s well-made and solid. That also makes the unit nice and light on your head, which helps to reduce the discomfort of a long gaming session, which can become annoying if the headset is a heavy metal construction.

On your ears, the LucidSound LS10P’s earcups are not genuine leather, but the leatherette gives a nice, soft feel that I found to be pleasant. Angles can be adjusted so that the pads fit snugly on your ears without pressing too hard, and I found it to be a satisfying fit no matter what your head is shaped like. Overall this unit is a nice, light headset that feels good to wear while playing.

Controls are smartly laid out on the LucidSound LS10P, employing the same signature earcup-dial design seen on all of LucidSound’s recent headsets. A dial on the left side, nice and big on the earcup, adjusts the volume. That dial is also a big button that, when pushed in, mutes the mic located on the boom in front of your mouth. Just like LucidSound’s LS25, which I reviewed not long ago, the LS10P’s controls are simple, intuitive and practical – all of which are crucial during intense online gaming sessions. 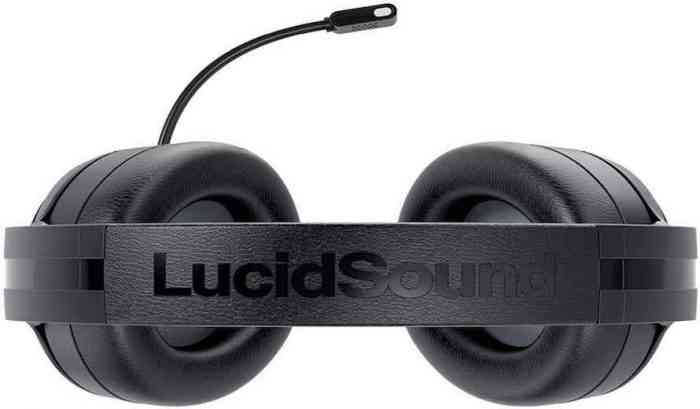 The LucidSound LS10P is not wireless, and for some people this might make it less attractive. However, I find that aspect to be a bit overrated. After all, you can simply plug it into your controller and – viola – you are free to use it, without any extra power supply or movement limitations. I found no disadvantage to the LucidSound LS10P being wired as opposed to wireless, and for the cost savings I say, why pay more for something you don’t need?

In sound performance, I found the LucidSound LS10P to be quite satisfactory. I am no sound technician, but I appreciated its 50mm speakers, which delivered nice deep lower tones and a good range of sound no matter what game I was playing. The mic, located on a removable boom, was very sensitive and did sometimes pick up unwanted ambient noise. But I liked the option to remove it and just go with the integrated mic if I wanted.

Unlike some higher-end models, there is no active noise cancellation built into the LucidSound LS10P, so this headset might not be able to completely cancel out noise in very noisy environments such as a public place or a loud eSports gaming tournament. But for the vast majority of us playing in our game room at home, the LucidSound LS10P does a fine job. I found that it canceled out extraneous noise while I played, and I noticed no sound escaping from the earcups when they were covered.

If you care about the look and aesthetics of a headset, the LucidSound LS10P won’t impress you out of the box. It has a plain, monochromatic look that eschews the flashy LED lights and aggressive colors of the top gaming units. Now, that can be a good thing as well – for example, I would be quite comfortable using the LucidSound LS10P on the bus, or at the mall, as its discreet look is very unassuming and doesn’t scream “gaming headset” to passersby. That’s not something I would say about the LS25.

For the modest price of $59.99, the LucidSound LS10P offers good performance and comfort, and surprising quality for an all-plastic build – plus, it’s versatile, being compatible with all consoles and PC and even mobile. This might not quite be at the level of the latest high-end wireless gaming headsets, but it will do the job quite nicely for those of us who are looking for a decent at-home gaming solution.

** A review unit was provided by the manufacturer **