Ginger: Beyond the Crystal Review – A Fun Homage to N64 Era Platformers

Ginger: Beyond the Crystal Review

Developed in Madrid, Spain by Drakhar Studio, Ginger: Beyond the Crystal is a fun homage to Nintendo 64 era platformers. While hindered by a few unfortunate flaws, the overall experience will delight many who enjoyed games like Super Mario 64.

Ginger: Beyond the Crystal takes place in a world that has been destroyed by a mysterious explosion. The explosion trapped many of the world’s citizens (or Gingerians) in Crystals and destroyed villages. The unnamed goddess who protects the world sends our hero, Ginger, to restore the world. Ginger will take you through three different worlds. Each world will require you to rebuild houses, save its Gingerians and complete five different levels. For players looking for an extra challenge, there are 15 “red crystal” challenge levels spread throughout that take place on floating (and often times moving) platforms that force you to collect a specified number of red crystals.

“Ginger: Beyond the Crystal is a fun homage to Nintendo 64 era platformers.”

Ginger has the ability to attack, jump (and double jump!) and change outfits (as they’re found). The various outfits give Ginger different abilities. Throughout the worlds there are context sensitive locations that will prompt you to use a specific ability, for example, the “Mouse” outfit will shrink Ginger down to a tiny size to enter an area that would be otherwise inaccessible. Each world has a massive crystal that has Gingerians trapped inside. Collect enough mini-crystals throughout each level, and you’ll be able to rescue these Gingerians. You’ll also find various supplies, such as wood and rocks, that allow you to rebuild homes. Once you’ve rescued enough Gingerians, repaired enough homes and completed all five levels in a world, you’ll gain access to the next world. Ginger doesn’t have a lot of health, but dying will only return you to the most recent checkpoint in a level – if you’re in the midst of collecting items (for example: collecting apples for a hungry plant), you’ll still retain the items when you die. Combat is easy enough, move in the direction of your enemy and press the attack button – but timing is important as some enemies have various defense mechanics, like pigs with lethal farts. One of the more common tasks in the game is the various fetch quests which happen far too often. And some of them are just downright idiotic. One Gingerian asked me to fetch him two fish. Both fish were just hovering in the air, nowhere near water. Fetch quests often feel lazy in games, and Ginger: Beyond the Crystal is no exception. 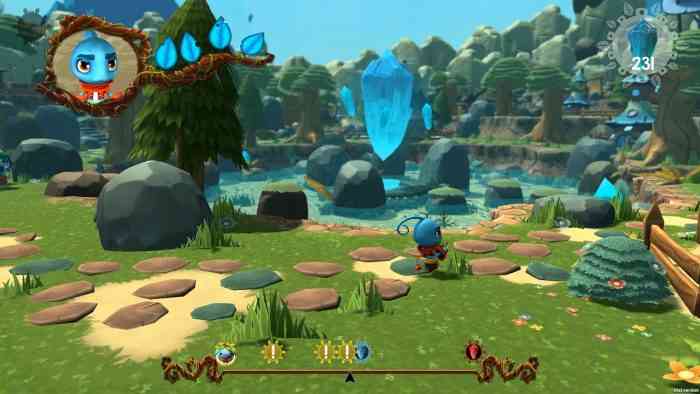 The game is unfortunately plagued with a handful of flaws that ultimately bring the whole experience down. The first issue is the load times – they are way too long, often over 20 seconds. The second issue is the camera, while usually not an issue in most levels, it becomes abundantly noticeable in the “red crystal” challenge levels when making perfect jumps from platform to platform is vital. The third issue worth noting is an odd freezing issue that pops up all too often. Not freezing as in the game stops working and you’re booted to the Xbox One dashboard, but rather brief, one to two second moments where the game just pauses. It’s particularly annoying when you’re attempting to fight enemies or making critical platforming jumps.

Ginger: Beyond the Crystal‘s graphics admittedly feel very dated. It’s disappointing that more effort wasn’t put into the visuals. That said, the levels within the worlds do offer quite a variety themes – from castles to mines. One particular haunted house level really stood out to me for it’s fun Resident Evil references. Each world introduces new enemies to the mix, which help keep things interesting, such as the creepiest looking frogs you’ll ever see in a video game that first appear in the second world. Ginger himself is probably the best-looking highlight of the game, and some of his outfits are pretty cute.

“Despite its flaws, Ginger: Beyond the Crystal is still enjoyable to play, with a great soundtrack and inspired moments from some of gaming’s biggest games.”

The game opens with an actual voice over narration, but all the other talking in the game is purely text based. The sound effects are nothing spectacular; Ginger doesn’t say much aside from “ya!” when attacking or “huh?” when he’s near something context sensitive. However, the soundtrack features some amazing tracks, often bringing back memories of music from games like Banjo Kazooie. One of Ginger’s outfits is a musician with a guitar, and some of the context sensitive sections require you to perform a “repeat after me” type music piece, not unlike The Legend of Zelda: Ocarina of Time.

Ginger: Beyond the Crystal fills a pretty significant void on the Xbox One, there just aren’t that many platformers on the console that fans of the Nintendo 64 used to enjoy. The game is not very impressive graphically and it has some unfortunate flaws, such as the odd freezing glitch and lengthy load times. But despite the flaws, the game is still enjoyable to play, with a great soundtrack and inspired moments from some of gaming’s biggest games.