Right when you start up Mark McMorris Infinite Air, you’re put through a tutorial that informs you about and subsequently requires you to perform basic manoeuvres and tricks to get you started. These include carvings, reverts, nose/tail presses, as well as ollies/nollies. While seemingly straightforward, it became frustrating when I failed certain sequences then was prompted to retry them without any reference to the button scheme. Nonetheless, after fiddling around with the buttons and retrying a couple of times, I completed the tutorial and was on my way to see what the game had to offer.

The actual snowboarding in the game is quite finicky, constrained, and a bit awkward. While it tries to implement features from that of Skate by using the right analog stick to perform ollies, flips, and the like, it doesn’t have the intuitive sensitivity and mirroring that makes it feel like you’re controlling your feet. For the most part, you’ll have to “charge” your jumps and spins early on to perform and land a worthy trick. The left and right bumpers also mainly act as your hands to perform grabs which is straightforward. Nonetheless, when trying to perform a trick it’s quite clunky and even difficult due to its implementation. It’s not impossible to get accustomed to or even land an awesome trick, but it’s just not a favourable learning curve with numerous bumps and groves that don’t work out as it should with ease and smoothness.

While there’s no story mode, the game does allow you to choose or create your own custom character and venture in the three main modes. Character creation isn’t nearly as complex or intricate as other games, but it still has the basics of choice between genders, tops, bottoms, accessories, and snowboards. No physical alterations, just purely aesthetics. Not everything is unlocked right from the get-go though as you’ll need to complete challenges to unlock them. 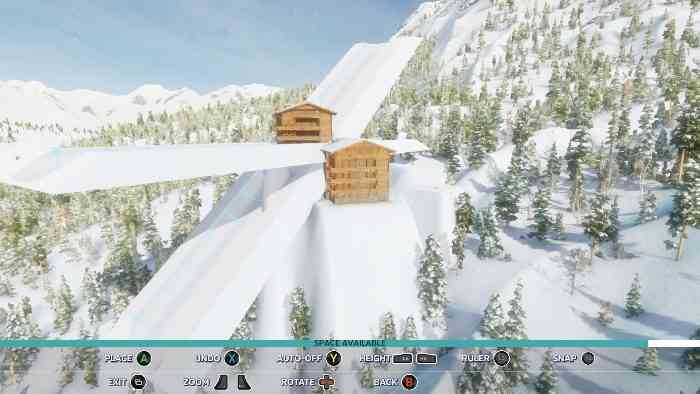 Before you jump into one off the three main modes in Mark McMorris Infinite Air, you’ll automatically be snowboarding around on a large mountain doing whatever tricks and however many manoeuvres your heart desires. You could consider this like a sort-of practice or free mode. In addition, while you’re snowboarding around, you can engage in other online players’ courses or load their very own mountain into your game.

The three main modes in Mark McMorris Infinite Air are World Editor, Circuit, and Multiplayer. World Editor is exactly like what it sounds in which you edit your own mountain putting rails, hills, trees and any other items and props that you feel will make it your very own. It’s great for those who want to really spend time making the mountain they’ve always wanted to snowboard on, but it’s only meaningful if you can snowboard through it with enjoyment and ease of control.

Circuit is your challenge mode where you try to achieve certain amount of points, tricks, and other criteria to unlock wearable items for your character. With pre-set courses to complete the challenges on, it’s a nice way to challenge yourself and engage in tricks you may not have thought of performing. However, this is where it gets a bit crazy. When crashing or bailing in the game, you can choose amongst three options to continue with: get up, restart the course, or get in a chopper. Unfortunately, getting into a chopper is only available in the free/practice mode so you’re only allowed to get up or restart the entire course in Circuit mode. When choosing to get up, you’ll very commonly respawn in a spot that caused you to bail in which you will endlessly and infinitely bail and crash. This forces you to use the restart course feature making you lose the points you’ve earned so far which most indefinitely sucks. 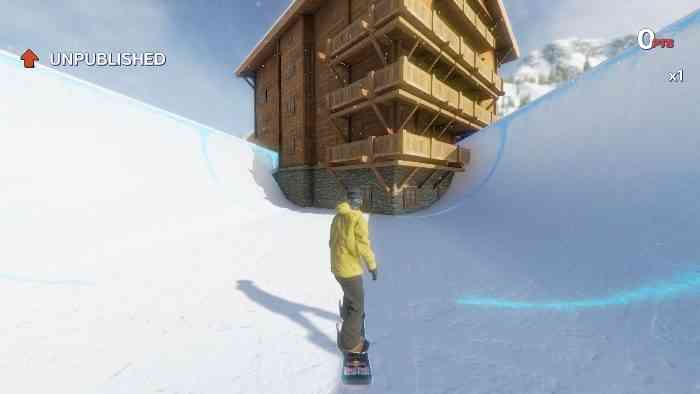 Lastly, Multiplayer is where you can snowboard live with friends or participate in courses other online players have created to try to obtain the best score possible. Even though it’s multiplayer, it’s a pretty lackluster multiplayer with not much content or excitement apart from playing alone. Multiplayer is really only there to compare scores and get a higher spot on the leaderboards instead of actual engagement or interactions.

Visually the game does a pretty good job showing a vast open-world mountain. It’s exciting getting down a steep hill and charging up for a nice jump, but it’s just with all the hiccups, constrained controls, and absent of fluidity the visuals become meaningless. Either way, you’ve got the snow, trees, and props to emulate the ideal mountaintop for snowboarding. Sound-wise, you have your typical narrator viewing your crashes, bails, and trick landings that will cheer you on, crack a joke, or ask if you’re ok. It’s not the most engaging or exciting guy you’d talk to, but he does his job.

All in all, Mark McMorris Infinite Air is a snowboarding simulator that roughly achieves the basics of what a snowboarding simulator should have, but ultimately fails to implement anything past it. Performing and landing tricks are difficult and messy due to the constraints and method of “charging” your moves before executing them. To make matters worse, it’s plagued with a faulty respawn mechanic that puts you into an infinite loop of crashes and bails. While visually the game isn’t too shabby, it all becomes meaningless when snowboarding becomes such a burden.