Future Unfolding tasks you with navigating a forest full of gorgeous plant and animal life. The top-down perspective gives you a full view of the beautiful environments, each one crafted like an impressionist painting in motion. The game is confident you’ll figure everything out, with no text of any kind but the occasional philosophical diatribe. I spent most of my time with no idea what was happening, and I was mostly fine with it.

Gameplay is broken down into puzzles built into the environments. Solving these puzzles opens up new areas. The levels are tranquil and serene, but you don’t feel this when exploring. Instead there is a sense of urgency. You’re compelled to continue searching, partially to succeed, mostly to learn what’s happening. There is the hope that somewhere ahead will be the answers you seek. Who and where are you? Why does everyone speak in riddles? Are you the only human around? The puzzles themselves are woven into the environments. You’ll encounter a clearing in the woods, with only three bushes as clues. Only through experiments and trials do you discern what can be interacted with, but it rarely feels obtuse or impossible. Instead, you find yourself clicking on or through objects because it feels like the natural solution to the problem. Most of the time your instincts are correct. Once in awhile you’ll see an object that looks out of place, but the aesthetic of the game makes even huge floating triangles seem like they’re supposed to be there.

“If I didn’t have access to a map, I would have no sense of where I left, or where I ended up, or if I’d been there already.”

A major part of the dreamlike immersion Future Unfolding achieves is the music. I’ve used the words ‘dream’ and ‘dreamlike’ a lot so far, and there’s a good reason for it. I’ve no other way to describe the sensation of disconnection and displacement that this game achieves. This elusive feeling is what propels you forward, what lets you forgive the total lack of concrete information available throughout the game. The soundtrack makes me feel like I’m lost in a forest, like there’s a low wind behind me, like nothing can hurt me here. This is one of those games where the soundtrack improves the graphics. Everything is prettier and more cohesive with this music. I can’t emphasize enough how critical the music is to your gameplay experience in Future Unfolding.

One downside to the natural feeling of the puzzles is that you can get pretty lost. The game has this esoteric feel to it that makes some of your actions feel ambiguous. Maybe you missed a piece of the puzzle, or never explored a particular room. The dreamlike nature of the game means that doesn’t feel like a big deal. However, the areas and your sense of progression through them is difficult to pin down. Certain glowing white trees will teleport you to a new area. If I didn’t have access to a map, I would have no sense of where I left, or where I ended up, or if I’d been there already. In fact, sometimes I would check the map again even if I knew the area was a new one, just because it felt so familiar. The individual worlds are all connected through a sort of hub. I inferred that the yellow marks on the map were ones I’d completed, although again, I don’t know this. I just assumed this was correct. Everything about Future Unfolding feels like this. Your conclusions could be right or wrong, but you often have little to go on which confirms your theories. The great design strengths of this game can also feel like its weaknesses. I love how ethereal it feels, but I’m also frustrated by this feeling. I’m torn between wanting to know more, and wanting to know nothing. I feel like a greater level of detail would only break the dreamstate achieved by the aesthetic. 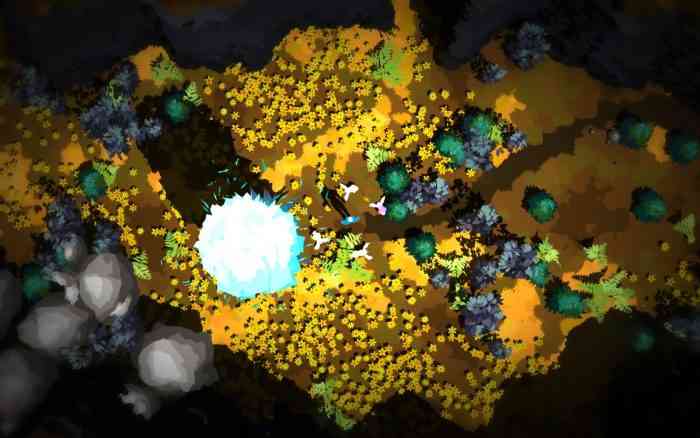 I can’t decide what rating to land on with this game. I’m frustrated by the lack of direction, but I know how essential it is. I would hate it if there was more detailed info laying around, if there was any handholding taking place. There is no plot to speak of, which is both a disservice and an asset. The textual information you do get is infuriating, part philosophy notes, part riddles. Yet if they just gave me the story it would feel wrong. In a way, talking about this game is like describing a dream you had to your coworkers. You can’t get it right, saying it out loud, and they all look pretty lost. The puzzle and gameplay mechanics are solid, however, The solutions are seamlessly blended into the environments and they feel natural when you do figure them out. Progression is never tied to some arbitrary object you’d never think to check. On top of that, the music is pure art, plain and simple. I have a feeling the soundtrack will sell as well as the game, if not more so. If you’re looking for an escape to a world you can’t describe over lunch, Future Unfolding is your jam. The heady blend of peaceful and puzzling at work is worth your full attention.