The Crow’s Eye is a first-person puzzle adventure set within the horror genre, much like titles such as Outlast and Amnesia: The Dark Descent. Now, I am not one for horror titles, but The Crow’s Eye is more of a psychological horror rather than the usual survival horror, which is a nice departure from the norm. Though not typically a fan of the genre, I have had my fair share of jump scares, quick pausing the game, and waiting until sun up before playing again. The Crow’s Eye was a pleasant surprise which I enjoyed more than I expected to.

The game places you in the role on an unnamed individual who finds themselves trapped in a decrepit medical university, the University of Medicine of Crowswood. The story takes place 20 years after an incident in which students and staff members disappeared mysteriously, prompting the closure of the school. Now seemingly trapped in this spooky locale, you are tasked with trying to escape this ghastly situation whilst finding out more about the university, the incident 20 years ago, and why you are here.

“Aided by some solid voice acting… the story in The Crow’s Eye is perhaps its greatest asset in pulling me into this game.”

Now, this is a pretty typical scenario of these first-person horror adventure games, but a story can be clichéd and remain interesting. The circumstances around the player character as well as the stories told through recordings and letters had me engrossed right from the start. This is also aided by the fact that this title focuses on the psychological terror rather than the survival horror. Because of this, I had time (and courage) to peruse through the levels for additional plot points rather than worry about an angry monster chasing me. Aided by some solid voice acting to be discussed down below, the story in The Crow’s Eye is perhaps its greatest asset in pulling me into this game. 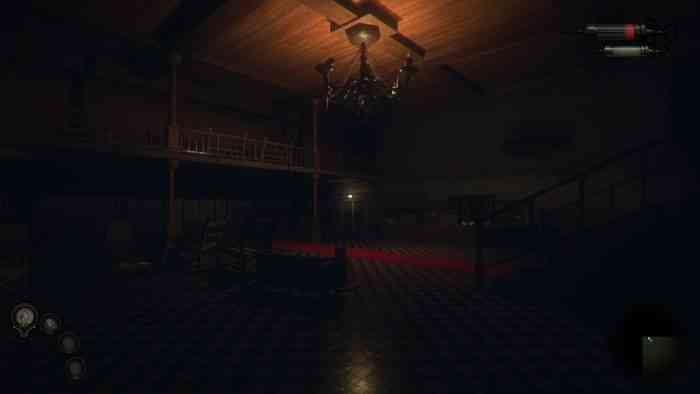 The gameplay of The Crow’s Eye is centered around puzzle-solving, adventure, exploration, and some platforming. The puzzles in The Crow’s Eye range in difficulty, some were very simple whilst some had me stuck for longer than I would like to admit. Of course, your mileage may vary when it comes to the difficulty of puzzles. With regards to the puzzles, some puzzles were a bit frustrating due to the mechanics involved with moving blocks in certain directions. The structure of the story, namely the letters and voice recordings, encourages exploration of the university for those eager to know every detail. Lastly, the platforming was an interesting aspect for a game of this nature, at times clever but at other times unnecessary. I had an issue with the key binding, as I was unable to jump using the space bar when sprinting. A simple re-mapping of the jump button fixed this issue, but it may not affect you in your playthrough. The Crow’s Eye also features a crafting system. Though a nice touch, the system is quite limited and it is obvious when the game wants you to utilize a certain combination. In this case, crafting seems to be a bit forced to disguise the typical genre objective of searching for various objects to advance the story.

The graphics of this horror title were somewhat mediocre. The game’s heads-up display, map, and object indicators were done well, making the game easier to manage and navigate. The foliage and some of the environmental textures also stood out negatively against the rest of the game. Lastly, the shadows in the game felt inconsistent to me, where the before and after of a cutscene may have resulted in a noticeable difference in lighting despite utilizing the same lighting device. Overall, the graphics may not have been outstanding, but also does not detract much from the complete experience.

“The music in the game matches the atmosphere extremely well, and contributes much to the psychological horror that the game emits.”

Alongside the story stands the sounds of the game as being done extremely well. The music in the game matches the atmosphere extremely well and contributes much to the psychological horror that the game emits. In addition to the music, the voice acting was consistently done well, though perhaps a bit over the top at times. Some of the voice acting was genuinely creepy, while the voice recordings were also done very well, only serving to entice me into looking for more of them. The only noticeable flaw I had with the game’s sounds, were the sound effects related to glass. In the game, you can pick up bottles, plates, and other such items and throw them across the room, resulting in a dull, one-time shattering noise, even if more pieces of glass continue to fall.

Overall, The Crow’s Eye is a strong experience that even those not as interested in the genre can access and enjoy. For regular fans of the horror genre, the “horror” in The Crow’s Eye may not be the usual scare you might enjoy. Of course, the narrative, music, and atmosphere of the title are The Crow’s Eye‘s strongest features, combining to form an enjoyable and creepy adventure. While certain mechanics felt clunky or shoehorned in, the game as a whole worked well fundamentally. For fans of the genre, or even those mildly interested in first-person horror adventures, look no further than The Crow’s Eye.