Forza Horizon 5 has taken the world of auto-racing by storm. It quite simply is the biggest, best-looking racing game in history featuring a wealth of incredible content. The location of Forza Horizon 5 is Mexico, a beautiful and diverse location filled with beaches, forests, towns, landmarks, ruins… oh, and a huge volcano! With so much to offer, how could the team at Playground Games step it up with the first of their two upcoming expansion packs? The answer was brilliant. Hot Wheels. One of the most iconic toys brought to the world of Forza Horizon. This isn’t the first time the Forza Horizon franchise has had a Hot Wheels expansion, but that shouldn’t matter – the content in Forza Horizon 5 Hot Wheels expansion is quite amazing.

Forza Horizon 5 Hot Wheels expansion is only accessible from the Forza Horizon 5 map. You’ll need to drive to the designated Hot Wheels location in the northern region of Mexico. From there, you’ll be swept away, via loading screen, to a brand new region high in the sky. Yes, a literal floating Hot Wheels park. Three large regions are interconnected by dozens and dozens of iconic orange racing tracks. You’ll see all manner of loop-de-loops, curves, jumps and so much more – all inspired by Hot Wheels playsets. Each region has a distinct look, from icy caverns surrounding a smouldering volcano to a vast forest region. After hours of playtime, I guarantee you’ll still be finding new roads, areas, and details throughout.

From Rookie to Legend

When you arrive, you’ll be tasked with completing a variety of challenges to earn stars. Earn enough stars and you’ll rank up. There are five ranks in total; Rookie, Pro, Expert, Elite, and Legend. Each rank will unlock a new class of vehicles, expanding your own personal Hot Wheels car collection. The Rookie rank is designed to give a feel for the Hot Wheels Park, a way to really ease racers in. By the time you reach the Expert rank, you’ll be experiencing breathtaking speeds against formidable foes. 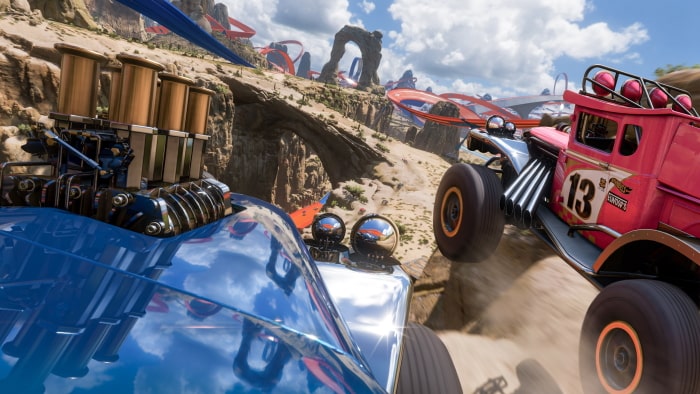 There is plenty to see and explore in the Hot Wheels expansion. They’ve even included special story races which have you racing while having the history of Hot Wheels being narrated to you. Learning about how Hot Wheels came to be, the first cars, the reasoning behind the orange tracks and so much more added a layer of depth that I really appreciated. Of course, another amazing feature is the ability to use these awesome unlockable Hot Wheels cars in the main game.

The Hot Wheels expansion isn’t without its issues. The first issue you’ll encounter is simply how difficult it can be to get around. While Mexico is primarily one large open area, allowing racers to really just drive anywhere, in Hot Wheels, you’re often restricted to following along the tracks. This makes for a more authentic experience, but I often found myself spending large amounts of time driving between challenges. In time, you’ll learn the fastest routes. And, there is a Fast Travel option – but what fun is that?

The second issue you’ll encounter is a bit more pressing. The AI Drivatars often have difficulty navigating certain aspects of the tracks. You’ll be driving along and it won’t be uncommon to come across a couple of cars just moving very slowly, or even stopped, along the tracks. It definitely doesn’t seem on purpose. They truly seem confused. This can be frustrating because they’ll often be in the way causing some annoying collisions. I didn’t notice this so much during actual races, so it’s not too big of a deal. 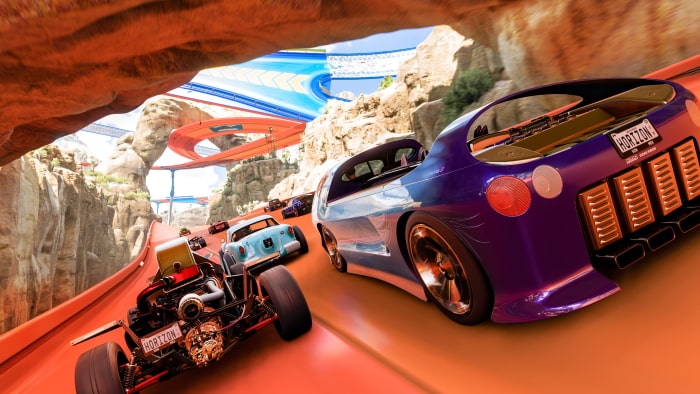 One of my favourite aspects of Forza Horizon, in general, is the way they pop up mini leaderboards whenever you complete various tasks, such as finding new roads, hitting new billboards, etc. It creates a constant source of competition among friends or folks that you follow. I follow CEO of Xbox Gaming Phil Spencer, so from time to time, his Gamertag will pop up on the leaderboards. “Hey, I just found more roads in Hot Wheels than Phil did!”. It’s a small detail, but it’s one that adds a fun, competitive element.

Build Your Own Track

Forza Horizon 5 Hot Wheels expansion expands on the existing creator functions, allowing players to design their own Hot Wheels-inspired courses. This includes adding the iconic orange tracks, loop de loops, jumps and so much more. And if you’re not feeling the creative buzz, you’ll be able to race on created courses from fans all over the globe. It’s yet another way that Forza Horizon 5 and this Hot Wheels expansion can add an almost indefinite amount of content to enjoy. 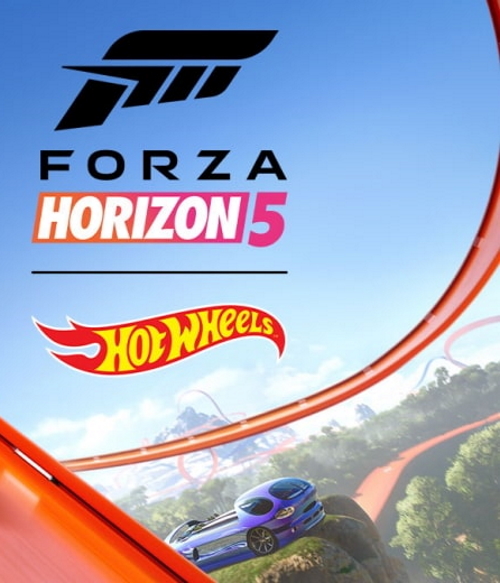