Hot Wheels has allowed people all over the world to live out their automobile fantasies since 1968. With the ability to create gravity-defying courses, the toy car manufacturers quickly drifted into the fast lane, leaving tire marks on our childhood. After its incredible implementation in Forza Horizon 3, Milestone looks to take the franchise out for a ride on its own but will this road trip avoid the speed bumps that hindered their previous solo outings?

As soon you hit the iconic, orange track, you’ll be transported back to your youth. Tracks spiral through an array of mundane areas helping to anchor the game in real life. There’s a sublime sense of scale that instills a childlike wonder. You will weave under coffee tables and fly over desktops in thrilling races that truly capture the frantic nature of its toy counterpart. Each of the six environments is distinct in terms of their aesthetics, however, the majority are confined indoors. From the studious college campus to the graffiti ladened skate parks, areas are lovingly designed to offer a world of possibilities. Unfortunately, whilst tracks differ wildly, the lack of variety in terms of environments is evident. Although there is the promise of free and premium DLC, it definitely feels like a missed opportunity to not include more household arenas in the base game such as a toy-littered bedroom or a freshly mowed backyard.

Synonymous with Hot Wheels are the myriad of loops and twists that break the laws of physics. With this in mind, Milestone has perfectly implemented the impossibilities of the franchise with courses that spiral along walls and jumps that overlap the track. Races have a lovely flow due to the use of height. Courses dip, curve and at times completely flip, making each drive a joy. Levels veer from the confines of paths lined with barriers to open floors with miniature cones that signal the route. These little deviations from the norm help to further embed the premise of the game and act as a reminder that the vehicles are just diecast models. 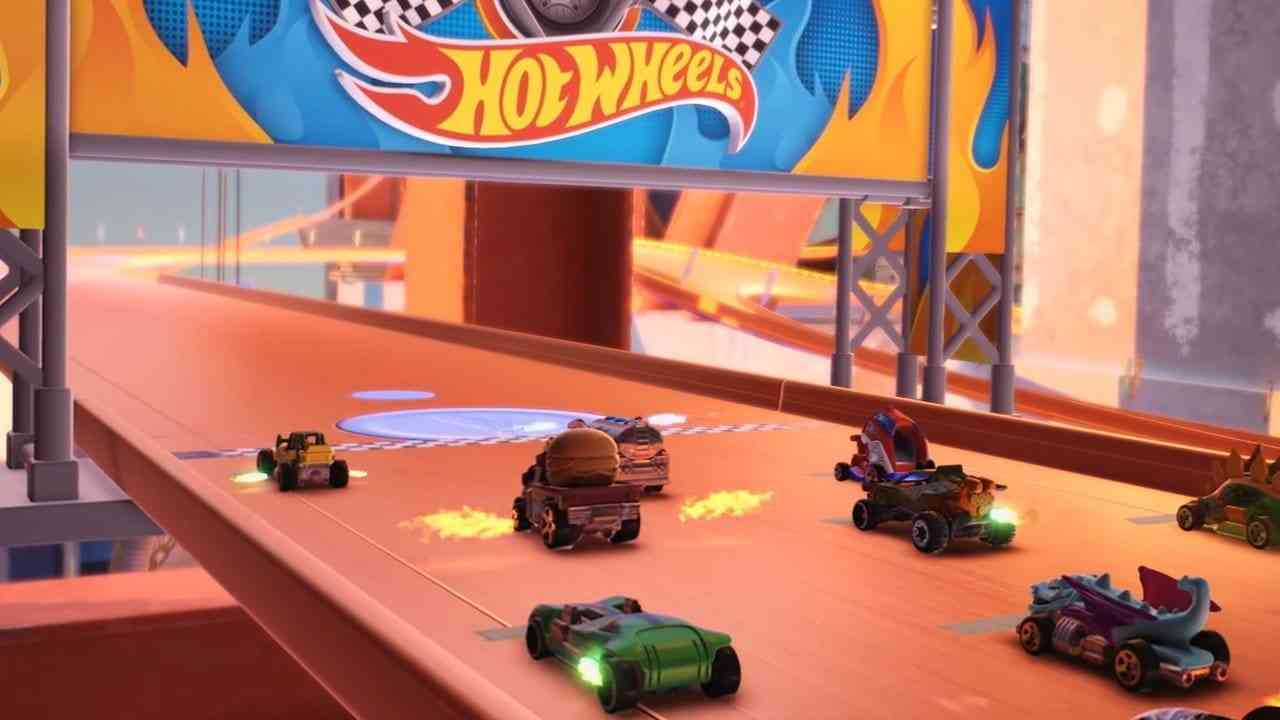 Milestone has placed momentum at the forefront so that races maintain a breakneck pace throughout. Speed boosts are expertly positioned allowing you to use the velocity to drift into hairpin bends, in return gaining a boost that can then be activated to cruise past your opponents. This does create a rubberband race meaning that you can quickly dart from 12th to 1st providing you nail the track. Reaching the podium is not a given. Races are difficult, requiring you to not only learn the layout of the course but also master when and where to drift and boost. Stifling your run are a number of hazards that can quickly leave you in last place. Most of which can be avoided by maneuvering left or right, however, the imposing spider is difficult to steer clear of. With a web that can instantly stick you to the ground, this will halt your progress, forcing you to boost your way back into the race.

Each vehicle in Hot Wheels Unleashed has been flawlessly interpreted to resemble the diecast model. From the plastic undercarriage to the metallic body, every material shines and glimmers appropriately. In addition, minor scratches and decals are also visible helping to keep the game grounded in reality. Cars are unique in terms of their stats with pickup trucks being much slower than supercars, but this has been countered to encourage the use of a range of vehicles. Larger machines are able to store several boosts helping them to keep up with smaller, nippier speedsters.

With over 60 toys to unlock, you will be required to use the in-game currency to purchase a blind box or a car from the everchanging daily deal section to build your collection. Whilst money can be earned by completing races in any mode, this adds a monotonous grind-like loop to the game. Unfortunately, you may also receive duplicate vehicles which can be sold or scrapped for parts to upgrade your other cars. As well as improvements to statics, you can also alter their appearance. Add colors and stickers to create your ideal ride, or jump online and download from the wealth of community creations to personalize your vehicle.

Hot Wheels City Rumble is the game’s single-player experience. Packed with races, time trials and even bosses, the mode is brimming with content, rewarding you every step of the way. Although lacking in presentation, each level containing two objectives, giving you a reason to revisit courses. In addition to this, the game includes standard quick race and time attack modes. Vital for any racer is the opportunity to compete against others. With local and online options, Hot Wheels Unleashed offers plenty of ways to leave others in your dust. In its current state, there are only online public and private lobbies, however, Racing Seasons are going to be introduced offering challenges that will grant you themed rewards. 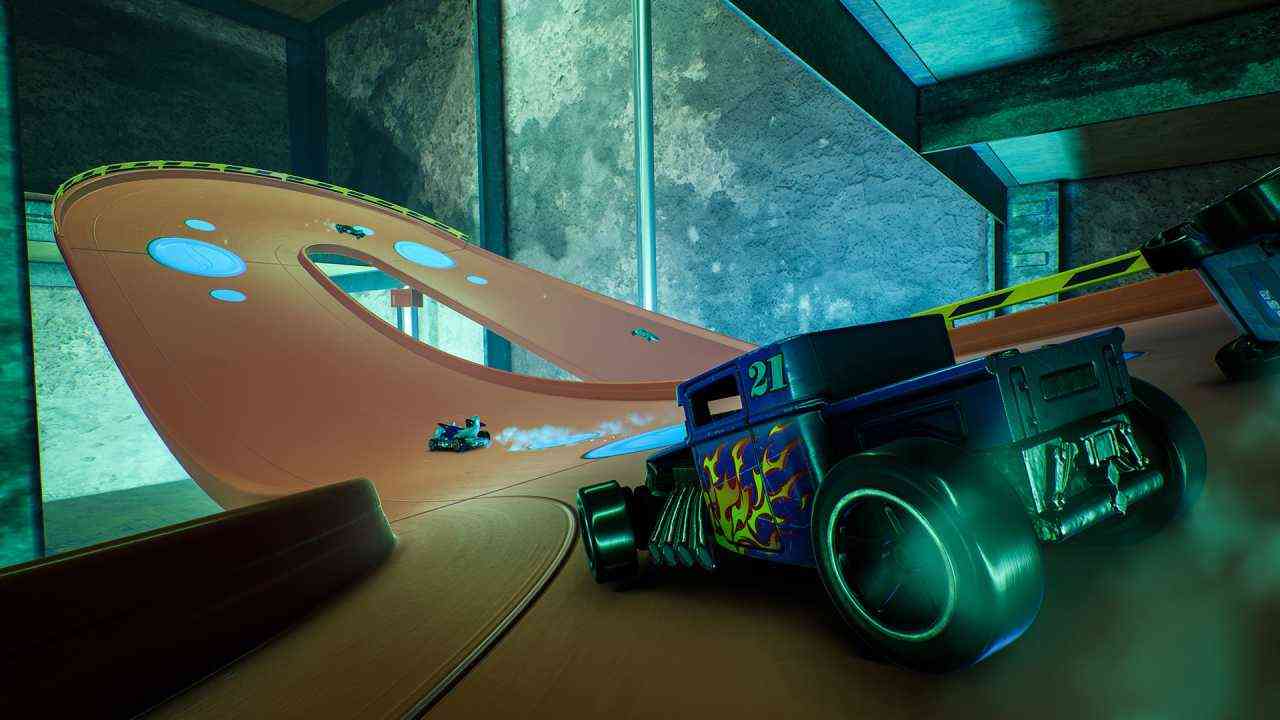 Inspired by the toy lineup, Hot Wheels Unleashed includes a Build mode that allows you to create courses piece by piece. With the ability to let your imagination run wild, you can quickly structure strange and wonderful tracks that can be uploaded for others to enjoy. Whilst creation is a little fiddly, lacking the simplicity of games like ModNation Racers, you can still build a track in a matter of minutes. If you’d prefer to just experience other people’s creations then you can simply scour community courses that are available to play on or offline.

Hot Wheels Unleashed is a fast-paced racer that captures the frantic action of the miniature, diecast toys. The momentum-based gameplay helps to create intense races where anyone can win or lose. Even though the tracks are exciting and varied, the lack of environments is disappointing. Vehicles look incredible, making you want to collect each of them, however, the grindy blind box system may halt your progress. Overall, this is a solid racer that will knock you over with a nitro-boost of nostalgia. With a roadmap packed with content, I’m excited to see what’s on the horizon. 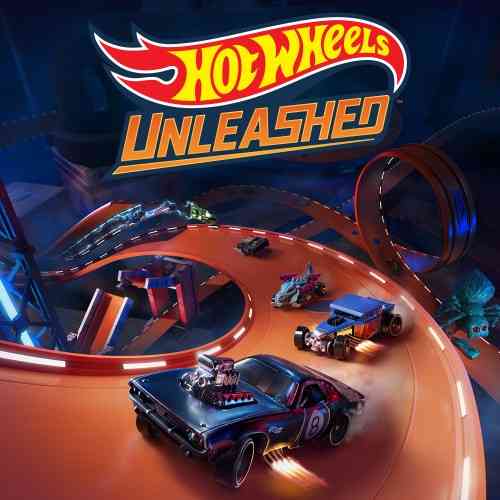