The Fidelio Incident is a pleasant surprise from Act 3 Games, an independent studio formed by the Art Director for God of War 3. A first-person narrative thriller, pitting you against the elements and your own unraveling mind. The pacing is tight and blistering, the graphics are stunning and the atmosphere is crafted with expert care. Ken Feldman and his team have spun up a harrowing tale of one man’s walk through the wreckage of his wildest years.

You play Stanley Whitaker, a man haunted by “The Troubles,” the bloodiest chapter in Ireland’s recent history. Your plane goes down on a remote island, separating you and your wife, Leonore. The narrative’s bones are lifted from Fidelio, Beethoven’s only published opera. The opening scene practically ripped me out of my chair. It’s a simple plot, but sometimes the simplest plots are the most powerful. After a brief introduction, you and your wife are separated by a plane crash. Immediately you’re jacked up with panic and distress. Her pleas for help come through the sat phone. She’s trapped in the wreckage of the plane’s rear half. With that sliver of plot, I was off. The whole story is soaked with tension, every moment hooks at your throat with fatal precision. I was a man possessed, unable to stop for anything until the two of us were reunited. Breathless wilds, layered in snow and glacial towers? Who cares! I’ve got a wife to save. I scrambled underground for respite from the deadly cold. Turning a corner, I stumbled into an enormous, glittering vault of crystallized ice and stone. I couldn’t appreciate it though. My motives to push ahead were too well-planted. In this way, the aesthetic and the plot thread together, holding your eye and seizing your heart each moment 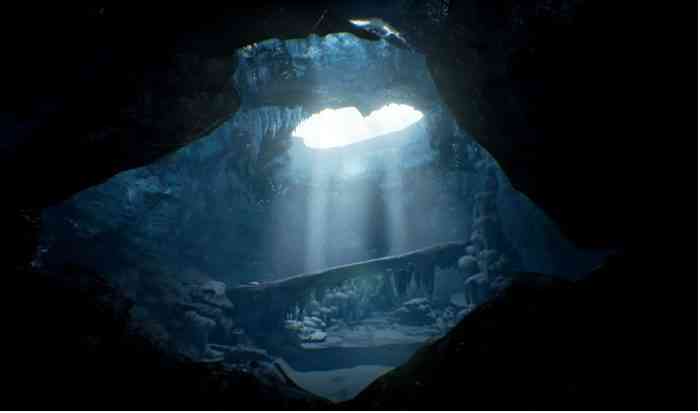 Let’s touch on the controls a little. Story-focused games like Fidelio need precise controls, so you’re unimpeded on your journey through the narrative. I was relieved to discover that exploring the island is exactly as easy as it needs to be. When you’re struggling to make it ten more feet to safety, you feel it. Getting around is so intuitive there’s no HUD on screen whatsoever. In fact, I only realized there was no HUD as I scrambled afterward to find flaws in Fidelio’s presentation. Another mostly flawless aspect of the controls are the puzzles. Yes, there’s frustrating elements, but there need to be. The actual system wherein you interact with the environment in order to progress is seamlessly blended with the environment itself. Important objects are lit upon inspection. Successful interaction prompts a vocal reaction from Stanley. Failure gives you nothing in feedback. That’s it! The whole process is so simple and smooth it’s hardly worth mentioning.

“The whole story is soaked with tension, every moment hooks at your throat with fatal precision.”

While I acknowledge that the graphics are terrific, I recognize that such a judgment isn’t about the detail level or the photo-realism at play. Instead, like an excellent photograph, the triumph here is in the composition. All these scenic, gorgeous vistas are carefully chosen and assembled in order to elicit a mix of awe, wonder, and urgency from the player. Yes, the land around you is beautiful, but it represents danger and isolation. These scenes are so damn pretty because you’re alone in them, and that in turn heightens the tension at work. The Fidelio Incident throws you into amazing vistas that will straight up murder you if you let your guard down. It’s a heady blend of emotions that keeps you pushing ahead while occasionally pausing to soak up the view.

Perhaps you’ve played these kinds of games before. “Where is the tension?” you ask. “Isn’t this just a walking simulator?” That’s where you’re wrong, friend. Here, the island itself works to eliminate you. Thirty seconds in the bitter cold is enough to end your life. Fires and hot air become islands themselves, oases to keep the frost from cracking your frame to pieces. I found myself counting down as I ran from flame to flame. Even the story poses a certain threat at times. You collect the narrative in fragments, diary entries from you wife scattered by the crash. Over and over, I risked certain death to snatch one more scrap of story. Putting the pieces together pushed me as hard as the weather did. The second half of the game gets you solving puzzles of a different flavor. No longer bound by the fear of freezing to death, instead, you’re wracking your brain to squeeze through a series of rooms. The underlying sense of urgency remains, it’s merely layered over a different environment. Rather than a walking simulator, you’re playing through a crisis replication system. You’ve more than one chance to get it right, but other than that it all feels like a grounded representation of a man in the worst conditions, working to survive another second.

“Over and over, I risked certain death to snatch one more scrap of story.”

In the end, you can’t escape your past. Stanley is forced to confront his demons with a central conflict rooted in Ireland’s bloody history. I pushed through the game to a finale that left me brimming with questions. Rather than being gut-punched by the emotional weight of the ending, I was more curious about “The Troubles” in Ireland than ever before. I was alive for the tail end of these events, yet I remember nothing about them. To that end, The Fidelio Incident did what few games have ever done: it inspired me to learn more about the real world. I got lost a time or two, I wish there were more than a few kinds of puzzles and I do like a good HUD. Beyond that, this was a fantastic game to experience. Given the nature of this game’s release, everyone is going to be surprised by it already. I’m telling you now there are more surprises in store once you start playing. Don’t sleep on this one. I highly recommend The Fidelio Incident for anyone hungry for moving stories in video games.