Dystoria is a shooter/puzzler hybrid that brings an 80’s arcade vibe to a 3D arena. You play as some hapless fool abducted outside an arcade in the summer of 1984. Your kidnappers announce your chosen status and you get right to training. The action that follows doesn’t have the twitchy energy prevalent in the arcades of yesteryear, relying instead on precision and planning to ensure your survival of each encounter. The controls support this philosophy, punishing you with swift death for going in guns blazing. No, victory in Dystoria requires a cool head as well as quick reflexes.

“Retro” is a hard target to hit, as far as visuals go. Dystoria nails that target dead-on with a death ray. This is what every kid imagined when playing games like Galaga, Arkanoid, and Sinistar. The simple galactic skyboxes sidle up nicely next to the clean glowing lines that compose every stage. The sound effects feel perfectly at home as well, with every laser blast and explosion coming right out of the arcades. The game captures this ephemeral atmosphere immediately. It’s reminiscent yet alien. The character models are simple and effective, acting as a visual shorthand to inform your next strategy.

“If you like your games dripping with 80’s arcade charm then Dystoria will be a good investment.”

I love the music in this game but man oh man, it can get awfully repetitive. The tracks aren’t terribly long, and it’s the sort of thing you notice when you’re hunting around every corner for the last enemy or ship part that remains hidden. The music is still atmospheric, powerful and well-written, there just isn’t enough of it. I listen to a lot of new retro wave stuff, and Dystoria pairs well with all of it. This game leans heavily on presentation. A more diverse soundtrack would have gone a long way towards supporting this facet of the game. I was into the music at first, but by the end of the game, I mostly had it muted.

You can save up in-game currency to get better ships and weapons, allowing you to maneuver more freely and hit harder. The dominant strategy always remained the same for me, though. Figure out where the enemies are on the map, then find the longest sight-line between them and myself, and draw that line with my lasers. Your shields just don’t last long in combat, and there’s never more than one checkpoint per level. This smart positioning technique was my deadliest weapon all the way to the final boss fight. Rather than reflexes or superior firepower, my battles were won by parking in the right spot and making sure my weapons didn’t overheat. 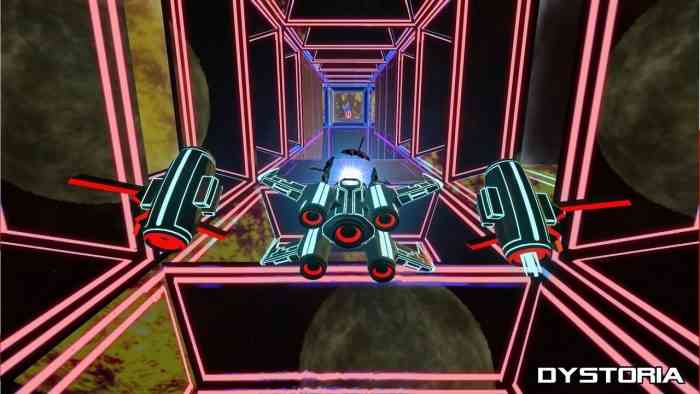 There are times when you wish you could move faster. Long paths, huge fields, and open arenas all beg for higher levels of acceleration. You can upgrade your ship with boosts, but I wanted more. On the other hand, speed would be fatal in most battles. You need to move with real precision if you don’t want your shields to vanish. Navigation through the worlds is otherwise smooth. Any surface you can see is one you can hover over. Sometimes when you’re driving on the walls or ceilings you can get disoriented but that’s just part of the challenge. Each stage is designed to be explored from every angle. The walls, floors, and ceilings are interchangeable. A lot of stages hold secrets that force you off the beaten path. Even the tutorial level taunts you in this way, informing you how much was missed by simply going from start to finish. The level design and the way you move all feed into the idea that Dystoria is more of a puzzle game than a shooter. You crawl over every inch of the levels looking for orbs and ship parts. You change your perspective and positioning to survive the battles. For some people, this careful pace will be a problem. I wanted more of a reflex based challenge, but finishing the game with clever moves and a bit of patience was still satisfying in its own right.

Overall I had a great time with Dystoria. It was almost too short for my liking, but more levels would definitely require more upgrades, music, and ships to unlock. Sometimes it didn’t feel like my pace was matching the game’s intended rhythms. I wasn’t moving fast enough or fluidly enough to get the full experience. This didn’t prevent me from dumping hours into the game, though. I never found all of the parts to complete the super ship, but I still managed to obliterate the boss without it. The graphics are beautiful, the level design takes full advantage of the inherent game mechanics and the controls are smooth. If you like your games dripping with 80’s arcade charm then Dystoria will be a good investment. 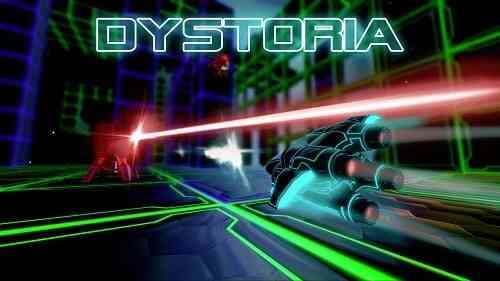