Day of the Tentacle: Remastered Review – Double Fine Is On a Roll Remastering Some of the Classics

Where do you even start with a game titled Day of the Tentacle Remastered? Well, let’s go over the basics: this is a remastering of the original game titled Day of the Tentacle which was developed and published by LucasArts, released in 1993, and this game is a sequel to Maniac Mansion. Double Fine Productions recently worked on another remastering of a LucasArts game – Grim Fandango, and have gone on to this one. It even comes with the ability to turn on the director’s commentary for the game to gather insight. So yes, this is an older game which has been somewhat forgotten until now.

At its core, Day of the Tentacle Remastered is a point & click adventure game that focuses on puzzle solving. If you are familiar with this genre, then you will be able to pick up and play Day of the Tentacle Remastered without any trouble. However, if you aren’t (or need a quick refresher) a point & click game allows players to do just that, point and click. You control the game characters by clicking on various objects and items in the game, using on screen commands such as: Open, Look At, or Use.

“A purple tentacle and a green tentacle – who were created by a mad scientist named Fred Edison – are hanging out by the river outside the lab when Purple Tentacle decides to drink some toxic sludge (good idea!).”

The game’s story follows Bernard, the stereotypical computer geek and his roommates Hoagie (the musician with the long hair) and Laverne (the med student), 5 years after the events of Maniac Mansion. A purple tentacle and a green tentacle – who were created by a mad scientist named Fred Edison – are hanging out by the river outside the lab when Purple Tentacle decides to drink some toxic sludge (good idea!). This of course causes Purple Tentacle to grow arms and want to take over the world. Fred Edison decides the solution to the problem is to destroy both Purple and Green Tentacle. Before that can happen, Green Tentacle sends out a SOS to Bernard, who decides to come to the laboratory with his roommates to help. Purple Tentacle escapes, so the plan moves to time travel when Fred Edison is able to send back Bernard and his friends to the day before everything went wrong. 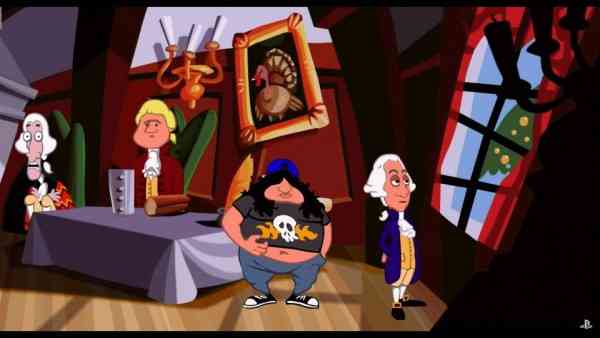 The story is a lot of fun. It’s quirky and self-aware which really works for a game about a giant tentacle. Kudos goes to the writers for the unending jokes, one-liners and insults that showcases the tone of very well.

A point and click game might not be for everyone but Day of the Tentacle really can draw those who are both familiar and unfamiliar with the genre. New comers to this style will find it very easy to select commends and click on items, while more experienced players will enjoy the organization of commands and ability to get your characters to do what you would like them to do. This classic was created by those who really understood the controls and how to make a point and click work for everyone. Mechanics can take a bit to get used too; I found myself just clicking on items and wondering why my character wasn’t interacting with them. You need to click the action first, then the item. Once you do that a few times, you get the hang of it, and it becomes second nature. Puzzles increase in difficulty as you progress, and if you are ever stuck there is always a hint nearby for help.

“The team actually used the original drawings as reference to update things.”

Being that this game is a remastering, the graphics were updated from the originals, which were pretty amazing for their time. Double Fine Productions added a feature that allows you to switch between the original graphics and the new ones. The comic book style is still intact, just a higher resolution version of already great artwork. The team actually used the original drawings as reference to update things. 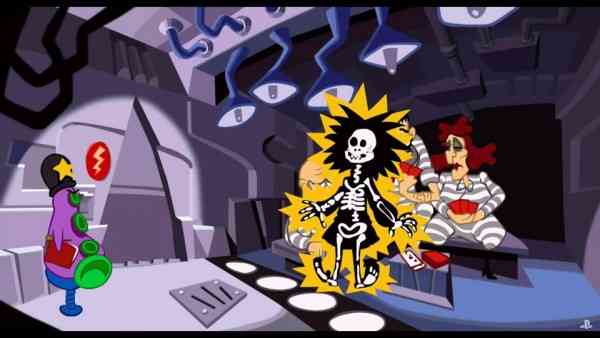 There is a reason why Day of the Tentacle needed to be redone: it really is a classic that should be experienced by both new and old gamers. Fans of the game wanted a re-release of this because it is not the something that you forget playing even after 10+ years. Double Fine Productions showcased their love and dedication to it by going the extra mile. It is not just a re-release of an old game. Remastering is the perfect word for this because that’s what it is. Music, sounds, graphics and gameplay are updated just enough to improve on an already remarkable game.

“And did I mention it includes the original Maniac Mansion as well?”

Day of the Tentacle: Remastered gets everything right. And did I mention it includes the original Maniac Mansion as well? This was a very funny and captivating adventure back then and it remains that way even today. This is a testament to a great game, that years later people are still talking about. I am fully aware that point and click adventures might not be for everyone, but to that I say, give it a chance. This game is truly one of the best in its genre.