The one man team that is Dazlog Studios has brought us a brand new side-scrolling puzzler called BOOR. This little gem of a game could have been easy to recommend, but unfortunately, is marred by a level of difficulty that is just too frustrating and will likely turn most gamers away. For those that are up for the challenge, you’ll likely find a couple hours of enjoyment here, but consider yourself forewarned.

In BOOR, you follow the story of a young girl who has the ability to clone herself. The game never really explains why she has this ability – so just take it for what it is. You end up on the planet Eden; a once hopeful world, that has since been overrun by evil robots under the control of a rogue AI, BOOR. Admittedly, the story is hardly original, but it’s really just window-dressing for the gameplay.

I really appreciated the simplicity in the controls and gameplay. You can jump, activate levers and clone yourself. You can only have one clone at a time and the clone has a limited time frame. The game is sectioned off in rooms (there are over 80) and you must complete them in succession. Each room has some sort of puzzle that must be completed – whether it’s a switch that needs to be flipped or a blocked path that requires a robot guard to shoot (by using your clone as bait). If your clone dies, you can simply create a new one. If you die, you’ll have to start the room over again. After a handful of rooms, you’ll sometimes come across an area that will provide some more story elements, or you’ll come across a boss fight. The boss fights require you to figure out a specific pattern to dodge incoming attacks, and eventually, the boss will be hit (usually by its own attack) since you do not have any offensive abilities.

Most of the game is designed quite well. You’ll come across a puzzle, sometimes requiring a little trial and error, but ultimately you’ll clue into what you need to do and then execute. Unfortunately, there are a handful of rooms that are just brutal. They require such specific timing or require you to move in an odd way (such as walking and jumping upside down, forcing you to move the controls in the opposite direction – which is even harder when time is of the essence). Then there are the boss fights. Die in a boss fight and you’ll have to start the boss fight over. And these fights are not short! They usually require the boss to be hit three times, but you’ll need to dodge attack after attack with excellent timing. If you get hit once, you’re dead, and you start over. Incredibly frustrating.

The graphics are a blend of grays (I counted about fifty shades of gray), complemented with the occasional use of red (such as our main character). Personally, I thought the use of color and graphic style was quite nice. There are other touches that were really neat, such as computer monitors with BOOR’s “eyes” following you as you moved. However, it was the sound department that really stood out for me. Let me make this perfectly clear; the soundtrack is one of the best soundtracks I’ve heard this year and is so far the soundtrack to beat in 2017. Head over to Dazlog Studio’s website and you can stream the soundtrack for yourself. 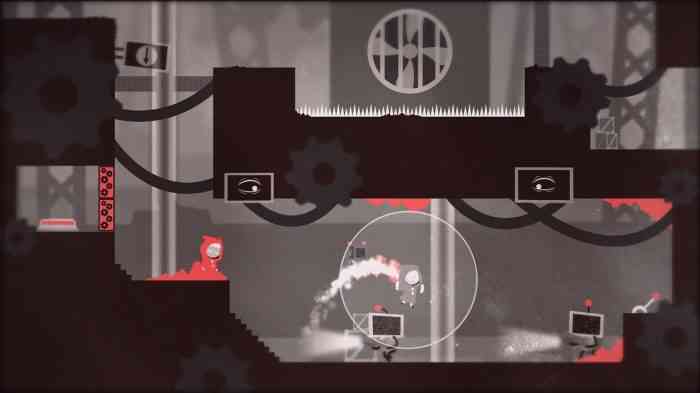 BOOR doesn’t offer any sort of multiplayer, or really anything beyond the main game. There are some collectibles to be found and the game has achievements. There was one section of the game that featured a nice little break from the main game; the Daz Arcade! At the Daz Arcade, you can try your hand at three separate retro-inspired arcade games. If you’re up for the challenge, I personally scored 3820 points on the Galactic Destroyer Vs Aliens machine.

I enjoyed BOOR, or at least I did, until Room 82 – which I assume is pretty close to the end. The required level of finesse and patience required to beat this room is just absurd and ultimately prevented me from finishing the game. It’s disappointing that more effort wasn’t made to balance the difficulty to provide a more fluid experience. I appreciate the desire to create really difficult challenge rooms, but add them as a bonus to the main game. I appreciated the graphic style and I absolutely loved the soundtrack. The story wasn’t overly original, neither were many of the puzzle concepts, but for the most part, everything worked well together. I wish I could recommend this whole-heartily, but as it is now, this game is only for those looking for a short but serious challenge.