What I love most about Aftergrinder is that it knows what it is, and what it isn’t. Developed by Grave Danger Games, Aftergrinder is an arcade runner that has you play as a skater dashing through increasingly difficult levels at high speed to make it to the finish. While Aftergrinder doesn’t really attempt much in the way of a narrative, its laser focus on easy to master mechanics and hard to beat levels makes for an addicting experience.

The game opens with some text about a Romeo and Juliet situation and then berates the player for still not having started the game in hopes of discovering more story content. This is when you’re thrown into a simple level and are tasked with jumping up and down, from the wall to the ceiling, to avoid crashing into the level’s geometry and making it to the Mario-like checkered flag finish, all the while collecting the three stars lying about. But that’s just level one. Aftergrinder gets increasingly difficult but still manages to keep its magnificent simplicity intact.

There are three worlds that separate its different play styles from your everyday runner to avoiding incoming lasers, passing through portals and the like. Unfortunately, these worlds are only distinct by way of a change in the color of the background. The same, boring cityscape can be seen throughout every level of the game and that starts to wear on the mind, blending the dozens of levels together almost as an extension of one another instead of introducing different worlds. If the story isn’t to be taken seriously, why not throw players in underground settings or high into the sky with rooftop skyscraper levels? Introducing the teleport mechanic as you make your way from floor to floor in a high-rise building would have really changed up the flow of the game. But instead, Aftergrinder focuses its efforts on diversifying the gameplay.

“Players are quickly thrown into the gauntlet in an almost ‘trial by fire’ type of approach wherein new mechanics are introduced at a rapid pace.”

Players are quickly thrown into the gauntlet in an almost ‘trial by fire’ type of approach wherein new mechanics are introduced at a rapid pace. Barely escaped the last level where you had to double-tap on an extra piece of geometry every time you went up to the ceiling or down to the ground? Well too bad, because the game is about to throw in another new mechanic where you have to crouch underneath an obstacle to avoid dying. And this goes on and on. At first, I was worried that either too many mechanics were thrown at the player, or that things would become stale in later missions. It is a credit to the level designers that I never felt like variations of levels and placement of obstacles felt repetitive even with so many mechanics being introduced early.

There’s a section in particular which lines up four or five portals, of varying colors, both on the ground and on the ceiling which forces the player to quickly choose the best path in the wake of incoming laser fire. Getting launched out of the other side at top speed, especially when using the boost ability, is an incredibly satisfying feeling. And while the game recommends a gamepad approach, I found it much easier and more simplistic to just use the keyboard as there are only ever two or three buttons to keep track of. 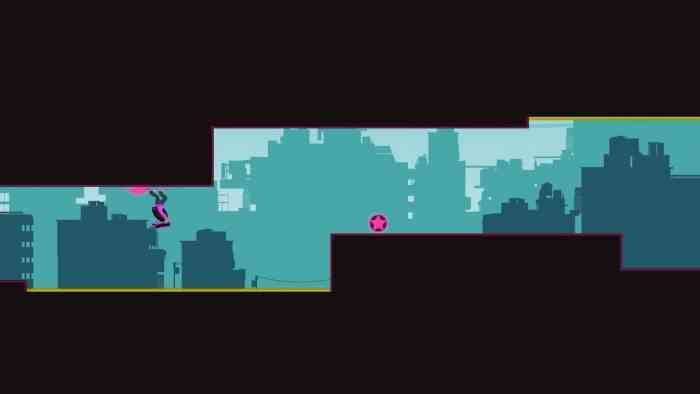 Everything is delivered via incredibly quick missions that can theoretically be beaten in less than 20 seconds but require far more thinking and memorization before being able to move on. Aftergrinder has so much depth and substance, executing it all with such a limited number of moving pieces. It is a testament to the mantra of simplicity and shows off how much developers can do with so little.

Aftergrinder is an incredibly simple arcade runner, but it uses that simplicity to its advantage. It focuses on a core set of mechanics and controls, as well as supremely responsive movements, to keep the player going level after level. It’s quick load-times and short levels feed into its overall approach. It’s great to play a game lie Aftergrinder that knows what it is instead of trying to be a jack of all trades.