After the monumental success of Journey, the indie-game-that-could, it is only natural for there to be a legacy of other indie titles who try to capture a similar magic, come flight or fall. AER Memories of Old visibly takes inspiration from a variety of great games, but never quite manages to put together a deep, coherent whole, skimming off the tops of the likes of Journey, The Legend of Zelda, and ABZU. But while ABZU‘s oceans are teeming with life, AER comes up empty.

In AER, you play as Auk, a shapeshifter on a sacred pilgrimage through a shattered world. The game is centered around exploration and discovery as Auk transforms into a bird to soar over floating islands and illuminates sleeping temples with her lantern. Coupled with the sound of whistling wind and the pastel palette of the sky, flying feels amazing — there’s nothing better than hurtling through the clouds as a bird and changing back midair to rocket towards a bit of floating island like a meteor.

Expect to get lost in the overworld of AER, but not in a good way. You are only given vague directions by NPCs and no map marker, with no journal to record what little information you are given. This isn’t inherently bad design — meandering about these islands wouldn’t be as frustrating if there were actually things to see or do on most of them. There are a few unexpected gems to discover (such as the circle of dancing crabs on one island), but not as many as you would expect in this game that encourages you to explore. Many islands are merely tiny rocks with a tree or lake on it, and only one has a few other people on it to talk to.

“The game is centered around exploration and discovery as Auk transforms into a bird to soar over floating islands and illuminates sleeping temples with her lantern.”

Auk cannot fly within the caves or dungeons found in the hollows of islands, so the game boils down to puzzles and platforming. Both are easy, with dungeons almost exclusively consisting of activating a glowing diamond shape somewhere in the area, spotting the next one, and platforming to it in order to open some doors or lower some bridges to progress. It all requires little thinking of your own — there isn’t any specific order you have to activate these in because it’s all rather linear (unless you miss a passage, in which case you’ll have to backtrack and find it). With little variation to this formula throughout the game, eventually, you find yourself just going through the motions. In some of the larger dungeons, you can get lost, which does require some wandering around until you find that next glowing diamond. 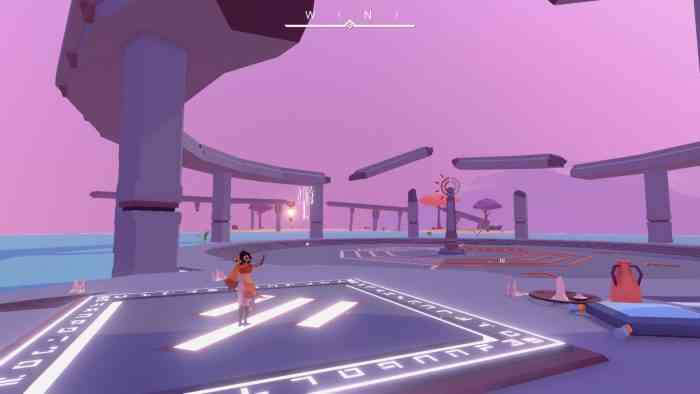 While the islands are rather stark, the writing in the game does much to enrich the world with details, myths, and history. We are told stories of the Creator, the champion Karah, and the spirits that remain in this land through NPC dialogue and the large tablets throughout the islands. However, the legends and past of the world of AER are written so thoroughly and conveyed to the player with such certainty that all of the mystery and magic inherent in ancient myths are sucked away. It is an unfortunate case of too much telling and not enough showing. Whereas Journey is all show, with the complete lack of text leaving the environment to tell the story, letting the player’s imagination fill in what happened for themselves, AER does the exact opposite. While this is not automatically poor storytelling, for a game about discovery and the exploration of this world’s ruins, it’s crippling. The player almost never feels that they found something for themselves because none of this knowledge was lost or waiting to be rediscovered — all of it is already known by the NPCs and by the remaining spirits in the land to be told to Auk, with even more recorded perfectly by the giant stone tablets. There is little to be gleaned from the environment itself. The only times that I did feel connected to the story was when I encountered the stationary, lingering spirits of people from the past and caught their fragments of dialogue. This was the best story aspect of AER to me — it shows the player that this world was once bursting with life; in the past, others had done the same pilgrimage that you are doing, their dialogue alluding to other stories that you can engage with, that you can try to piece together yourself. 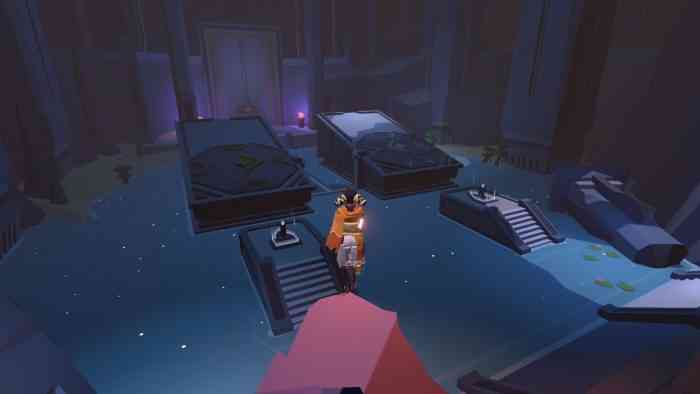 AER‘s greatest strength lies in its visuals, with its low poly, geometric aesthetics and soft pastel palette. Both the overworld and the dungeons of AER are complemented by the absolutely marvelous lighting, with sunlight spilling into caves out of cracks, the brilliance of technology from another age, the glow from mushrooms and tears in reality. Aesthetically, the game is already wonderful, but Forgotten Key produces magic with it through creative, compelling imagery, making the most of the style they chose. There is still grandeur in the crumbling monuments, in the powerful images of spirit beasts and old cogs turning in an abandoned factory, the creative use of geometry, light, and legend. The sight of bright silver comets flying by as the towering Keeper of Dreams rose up from a long sleep was a minimalistic spectacle that took my breath away. The musical score follows the same philosophy as the visuals — it isn’t complex, but plays at the right moments, uplifting scenes and portions of gameplay.

AER Memories of Old knows its limits and doesn’t try to go beyond them, which causes it to fall short in places, leading to simple gameplay and environments. It makes the most of what it has, especially with its visuals, but AER still turns out to be a rather short, shallow game in the end. 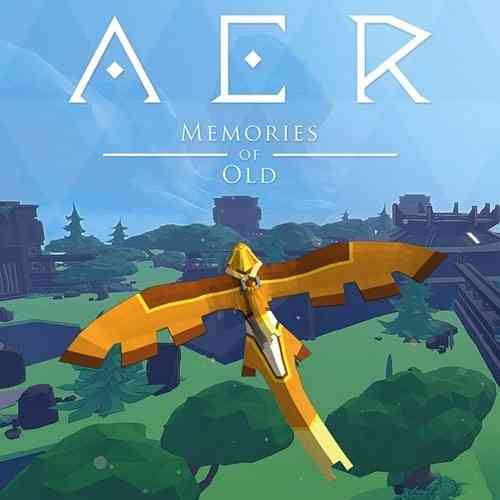