Pro-wrestling is a strange and wonderful sport. Part combat and part entertainment, there are many facets that make the medium unique. Due to the amalgamating elements that take place in the squared circle, it has become increasingly difficult to capture the essence of wrestling. Whilst the 2K series has been trying to replicate the television experience, fans have been yearning for an iteration that places gameplay at the forefront. Well, coming down the aisle, ready to powerslam its competition is Action Arcade Wrestling but will this quirky title manage to strike the perfect balance between the sport and entertainment.

At its core, Action Arcade Wrestling is a fun and hectic rendition of the sport. Fusing elements of WWF Wrestlefest, No Mercy and even Street Fighter, VICO Game Studio has managed to create an absurd and endlessly entertaining fighter.

A Clothesline From the Past

Due to its two-button system, AAW is accessible, allowing anyone to get between the ropes. Although this may sound restricted, pretty much any permutation of the buttons and directional pad alter attacks adding depth to the combat. Grappling is at the center of every wrestling game as it’s the base for all major moves. VICO Game Studio has combined elements from several games to create a unique yet familiar system that will appeal to fans of the genre. AKI’s famed system is present which includes strong and weak grapples with different maneuvers being executed when entering any directional input. Differentiating itself, if competitors both attempt to grab, a WWF Wrestlefest style button-mashing mini-game begins with the winner gaining priority, allowing you to crush your opposition’s skull into the canvas. Boasting over 700 moves, attacks are diverse but do fall out of the realm of reality. Although wrestlers do have traditional movements, superhero-esque characters can shoot lasers and summon fireballs. 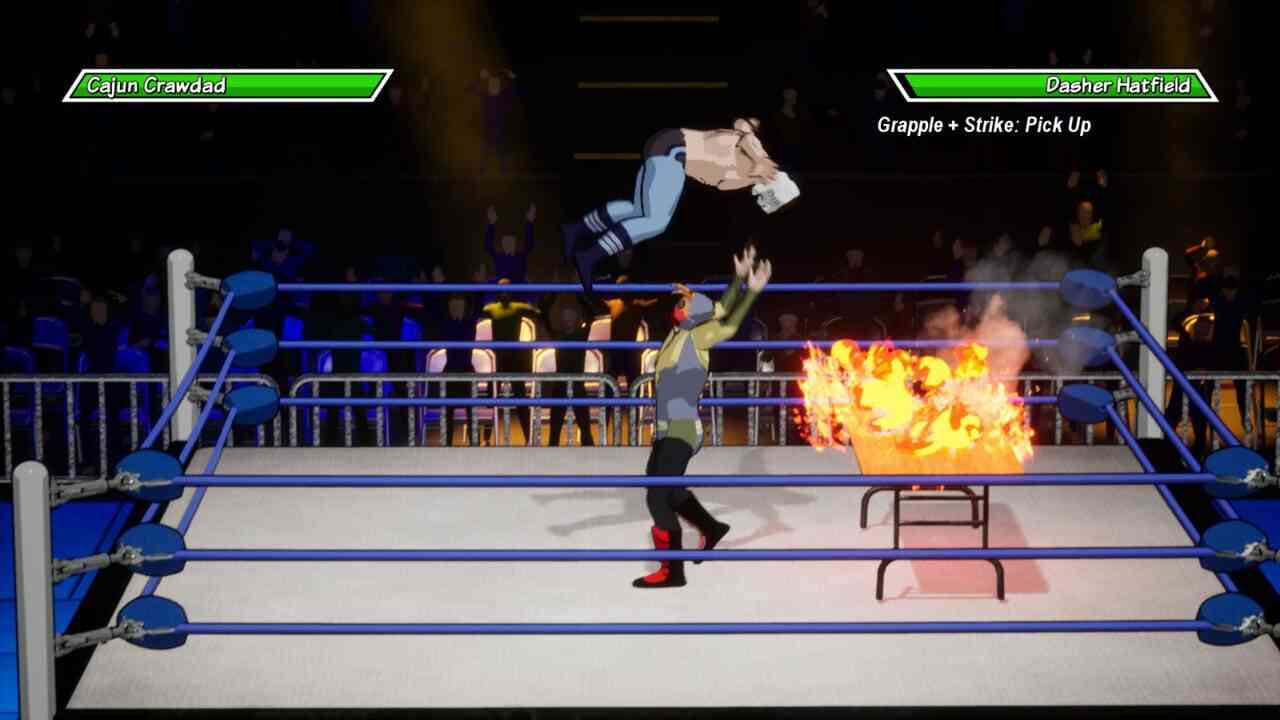 Striking is varied with heavy attacks having a window of opportunity to counter and light attacks being blockable. However, you can not just simply hold back and block every punch as they will eventually break through. Similar to one-on-one beat ’em ups, distance is a factor. Staying out of grapple range and dashing in to attack is an excellent way to heighten the importance of close-quarters combat. Although blocking is simple and intuitive, the reversal system is hidden and may seem non-existent when playing. Repeating the same move increases the probability of it being reversed, whilst this adds strategy to matches as you have to remember the moves you have performed, it is random whether the reversal happens or not. Even though the system works, I would have preferred a player-initiated method that rewarded timing and skill.

During matches, you can earn points for having an entertaining bout and performing spots. Throughout, objectives will appear helping to navigate the match in ways that may differ from your usual playstyle. Completing these will result in points that unlock rewards such as belts, taunts and other customization options. In addition, power-ups also appear from time to time giving you a boost during the fight. Whether it gives you extra damage or the ability to kick out when you have no health left, these power-ups add a layer of unpredictability to matches. Purists don’t need to worry, as with most elements in the game, aspects can be altered to suit your requirements. So if you don’t want power-ups or spots then simply turn them off.

Be Your Own Booker

Action Arcade Wrestling has the deepest and best creative suite I have ever seen, although there is one caveat, it’s not actually in the game. The Wrestling Lab is a free piece of software that is available on PC. All uploaded creations are downloadable on any version, meaning there is a huge bank of characters waiting in the gorilla position. Due to this, the fictional roster can be overlooked in order to create matches from your wildest dreams. Whether you want Omega vs Rollins or Santa Claus vs Batman, the possibilities are endless. These can be neatly arranged into federations, each with its own title giving you the ability to create your dream organization. 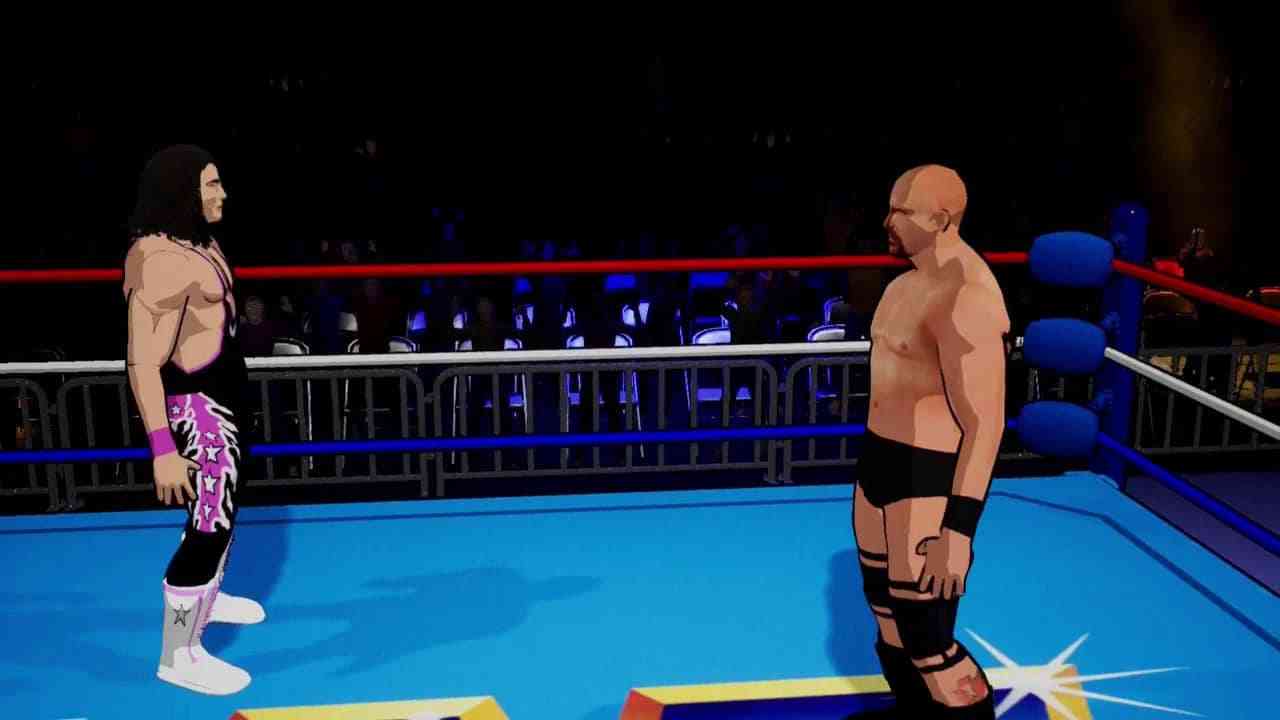 Match options are pretty straightforward with all expected single and tag team match types. Without a story mode, arcade tower battle or online modes, the game does lack longevity, relying solely on local multiplayer. A highlight is the battle royal which can have up to 10 characters on screen at once without dropping from 60 FPS. The ring does increase in size at this point, which makes sense from a gameplay perspective but looks a little odd. When eliminated, characters lay in a line outside the ring like a strange Wrestlemania morgue. Personally, I would have preferred them to disappear rather than stay on screen. This is also present in tag matches as wrestlers stand lifeless on the apron, hindering the experience.

Cracking characters with weapons is a blast but it’s not without its flaws. As the game is on a 2D plane, connecting with strikes can be a little troublesome. The array of weapons is impressive and hilarious. From guitars to lightsabers, each comes with its own unique sound effect that enhances the strike. Unfortunately, some weapons simply float next to the hand rather than being gripped and at times, you can simply walk straight through objects. However, due to the ridiculousness that ensues, these little annoyances can easily be overlooked.

The cell-shaded visuals give the game its own identity. Menus are tinged with 80s nostalgia, signaling the love for LJN wrestling games. Although details are sparse, there is a great sense of atmosphere in arenas due to the depth created by shadows in the foreground. Sound effects however are a bit by the book with arcade-esque pings and repetitive sound bites that lack imagination.

Action Arcade Wrestling successfully achieves its prime purpose of being fun. With a ton of customization options, you can create matches that only existed in your wildest dreams. Although the power-ups and spots may put off purists, the love and admiration for the sport are evident throughout the game. 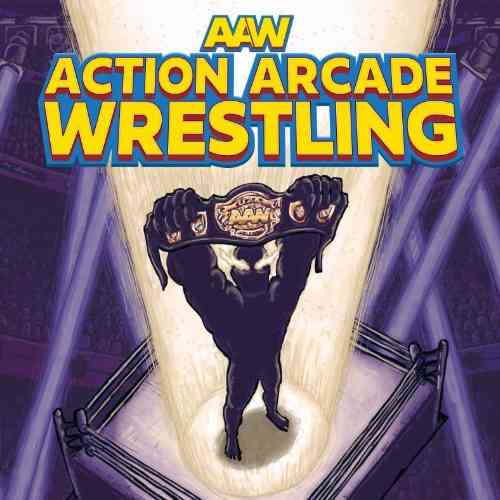 Signalis Puts the Dread in Dystopia
Next WitchSpring3 Re:Fine – The Story of Eirudy Review – A Garbled Fairy Tale
Previous Paint the Town Red Review – Bloody Fun, Until it Isn’t