What happens when you take the mobile out of a mobile game? Well, you get something like The Story of Eirudy. Trace elements remain threaded throughout the bones of this beast, but it mostly feels like a console product. Rather than dwell on Witchspring3’s mobile roots, I’m more concerned with what on earth is happening in the game at any given time. Between the curious mechanics and the awful translation, I was always a bit off balance when playing.

You play as a nameless witch, one whose only companions are the dolls she animates. Your goal is to create one with the power of speech since you’re a bit bored and lonely of late. Instead, you run into a human boy. He’s even got this speech thing handled already! So begins a blossoming relationship. This is also the point where the translation starts crumbling. To be fair, you’re still able to tease out the arc of the plot. It’s not complete gibberish. But any hope of nuance or tone is utterly dashed in short order. I thought I could ignore it until the boy’s father, the Lord, is introduced. This is both the longest dialogue chunk and the strongest evidence that Google translate was doing most of the legwork here. Thankfully, the actual gameplay is much more polished.

Just a Hot Mess in Every Line

Unlike most turn-based RPGs, Witchspring3 has you building your own level gains. Battles get you materials, which you use to make potions. These potions improve your stats, and you slowly get stronger. Your other path to power is your dolls. This little army of yours offers immediate and significant boosts to your strength once you unlock them properly. Since you can have three dolls active at once, you can turn the tide of battle before it even begins. Most of them start with major stat bonuses, and you can continue to level them up as you go. Either path to success -dolls or potions- involves a fair bit of grinding, however. 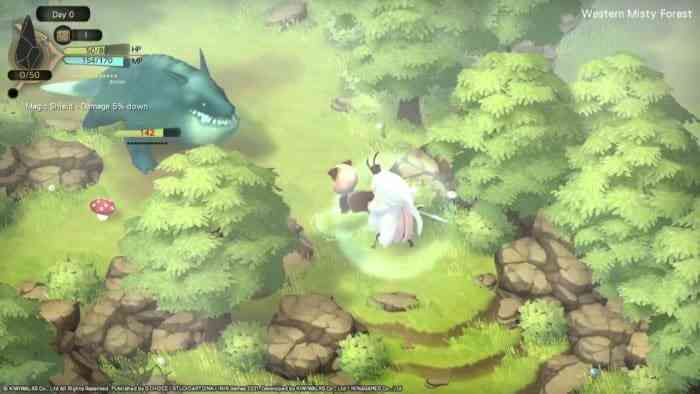 Yes, there’s a lot of legwork involved in making forward progress, but it isn’t grueling. You’re merely required to invest some time, is all. Every fight brings you closer to one goal or another, and there aren’t many consequences for failure. You don’t lose any supplies or experience when you lose, either. In other words, all you need to succeed is a lot of patience. Even so, I found myself losing momentum frequently. Between the garbled narrative and the laid-back level grinding, I had a hard time maintaining my focus.

Many Roads to Success

Not to say the combat and exploration isn’t good. It’s great fun! Witchspring3’s mobile roots mean the controls are easy to pick up. Things like spellcrafting, summoning, and skills give every battle ample depth and variety. Plus, most of your resource gathering is highly streamlined, and you’re able to navigate the world with ease. You can even engage in straight-up training montages to boost your stats. On the other hand, all this breathless level grinding too easily distracts from the main quest. Part of that problem ties back to the janky script, but still. The mindless grind felt more cohesive than the plot, which sapped my motivation to push ahead.

Normally, I’m laser-focused on the mechanics in a given game. The plot and the world-building are cool, but they don’t keep me coming back. And yet, Witchspring3 never quite hooked me. It turns out that compelling mechanical systems can’t make up for a fatal deficiency in writing. Perhaps this whimsical tale of an isolated deity reaching out to a human boy is an excellent one. It’s quite impossible to say, given what we’re presented with here.

On the other hand, if you truly could care less about the plot, there are some fascinating mechanical elements to mess around with here. Using homebrewed potions to level up is a terrific idea. Having a difficulty scale that’s both harsh and forgiving is a great way to hook a wide swath of players. And the hefty list of skills, spells, and summons means you can fight every battle in a new way. But otherwise, you’d best be wary about picking up Witchspring3 Re:Fine – The Story of Eirudy.