Kingsway is not to be ignored…

E3 2017 is a place of big budget video games backed by millions of dollars of marketing power. It’s also a fertile breeding ground for indie darlings that take everyone who play them by surprise. Such is the case with Kingsway from Adult Swim Games, a game that looks as basic as can be but is actually one of the deepest and most challenging RPGs this writer has ever played. Believe me: Kingsway will shock a lot of people.

The easiest way to describe Kingsway is simply calling it Windows 95: The RPG. The game uses Windows-style…uh, windows during the entire adventure, with each menu, battle, and town inhabiting its own window. The game starts with the customization window where I build my character and choose his class, and then I’m introduced to the map window. My health, magic points, and experience meter all reside in one little window I keep off to the side the entire time I play. The inventory screen looks like an old documents folder filled with icons. This game makes an adventure out of the mundane tasks we office worker types do every day, and it’s bafflingly fun to click around and adventure in the form of “working.” If only actual office work at a 40 hour a week day job played out like this, the drones of the world would be a lot happier.

“Kingsway looks super simplistic… but the adventure I found within these ancient windows really surprised me.”

The battle system fittingly incorporates one of the most annoying elements of an old Windows-based system: pop-ups. Each monster found along the way pops onto the screen unexpectedly and battles start immediately after a baddie appears. Multiple baddies means multiple pop-ups, so some battles could end up resembling a super aggressive spyware program fairly quickly. Battle windows come equipped with cooldown meters that look like the old download bars with the green rectangles, each round of attacks becoming a race to see whose meter fills first. Once an enemy is defeated and looted, the battle is ended by clicking the big red X at the top right and the satisfying feeling of closing an annoying pop-up that comes with it. I’ve never dreaded pop-ups more than I do in the world of Kingsway. 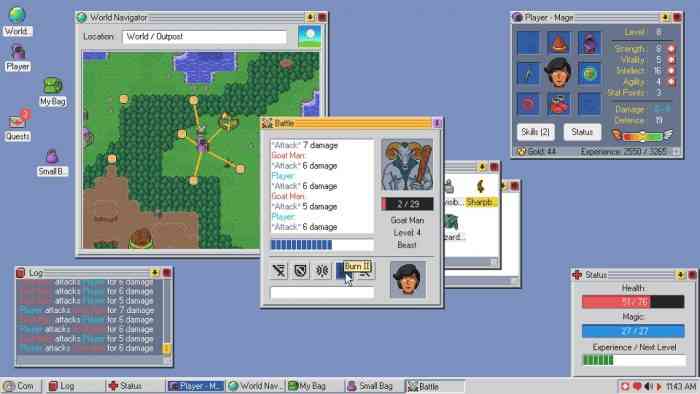 Being an RPG fashioned out of an old operating system apparently means some things cannot be saved properly, and thus the game’s most frightening feature rears its head: permadeath. When Jason the Brave’s life meter reaches zero and he dies he’s gone for good, never to return. This doesn’t mean much for the early playthroughs where one mistake makes for a dead hero, which is what my demo mostly consisted of, but the longer I play the more cautious I am about finding enemies to fight. Oh, and it’s not like I can plan for certain fights to appear on my map because Kingsway is a roguelike with randomly generated worlds in every playthrough. I can only imagine how it’ll feel when a beefed-up hero that survived hours of adventuring with me runs into a tough boss fight I wasn’t prepared for and bites the dust, meaning I have to start at square one all over again. That’s going to test my blood pressure medication.

Kingsway looks super simplistic, emulating a bygone era of computers that I had thought I would never see again, but the adventure I found within these ancient windows really surprised me. It’s a deep RPG with customization and inventory management, a map that changes with every playthrough, and danger lurking in every pop-up window. Never did I think that clicking through computer windows would be so enthralling, but Kingsway has set a new bar. Look for it on Steam later this year.

Monster Prom: Collector’s Edition Gets Physical
Next Bionik’s Lineup of Accessories for Switch, PSVR and Xbox One is Pretty Impressive
Previous Forza Motorsport 7 Preview – Reason Alone to Buy An Xbox One X