Bloodborne: The Old Hunters – Guide to Slaying the Orphan of Kos

EDITOR’S NOTE – This guide contains spoilers in regards to Bloodborne’s story. If you haven’t beaten Orphan of Kos, read at your own risk!

If you’re just joining us now be sure to check out our guides for Ludwig, The Living Failures, Lady Maria and Lawrence.

The big mystery of the nightmare in The Old Hunters is what exactly its source is, and as we conquer The Fishing Hamlet, we find out just what happened to set the events of the DLC in motion, playing a key part in the overall story. The DLC culminates in what is probably one of the creepiest areas of the game, where Byrgenwerth committed a grave atrocity against the villagers to help reach out to the Great Ones, an important part of Bloodborne’s story. What better way than to tie in an important story element than with one hell of a difficult boss. 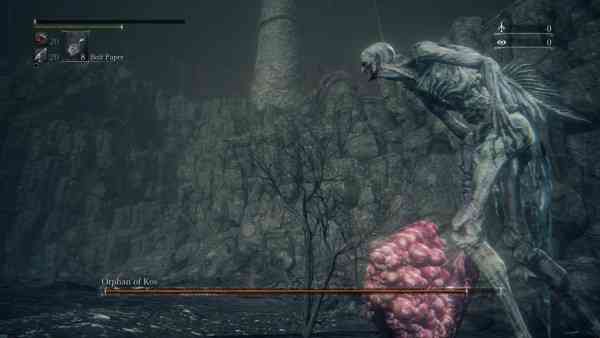 The Orphan of Kos

This had to be the most difficult boss fight I’ve ever experienced in a souls game. All the other bosses of the game, even Gehrman, pale in comparison, in my opinion. The best fights in this series tend to be against a smaller humanoid enemy versus some hulking creature, and the Orphan of Kos serves to act as a brutal reminder of this. This boss will take all of your focus, as even one mistake can deal extremely heavy damage. The first phase is admittedly slow, and his attacks are relatively easy to parry, especially his wind up leading to his overhead slam attack. This is the best time to try and exploit this, as his attacks will only become more aggressive. To help with evasion, dodge to his left for any attacks, as most of them tend to swing in wide arcs that lean towards the right. There’s no elemental weapons to help you, and you can forget those bloodgems that increase damage dealt to Kin. Despite the Orphan’s origin, he is not affected by them, noticeably, and your best bet is to go ahead stack up as much as you can to pump up the AR value of your most familiar weapon, as this fight boils down to you. Try and be judicious with your blood vial usage, as you want at least 10 remaining, coming into the second phase.

As the boss nears 50%, the real fight begins. The orphan will grow slightly, and adopt a much more aggressive manner of attack. The same rules still apply, and like Lady maria, you can parry the attacks at this point too, should you be a seasoned hunter. The Orphan of Kos will start to make use of ranged attacks at this point, and he will be able to summon a small lightning storm in order to attack you. If you see him pause and let out a long screech (have I mentioned the sound design for this fight is great?), a storm will be called down, and you’d do well to evade it. Having bolt resistance for this fight helps, and Henryk’s gear should be heavily considered for use, or any armor with high bolt resistance, really.  The other ranged attack to be mindful of is the tossed projectiles. It made use of it very rarely in the first phase, but the orphan will pepper the arena with them as it leaps around. The Loch Shield helps again here, especially against the lightning attacks. Your best opportunities in this case are to hit and run, if you can’t reliably parry his attacks. The orphan is extremely aggressive in this phase and you need to make sure you have plenty of VIT/Stamina should you accidentally get hit. 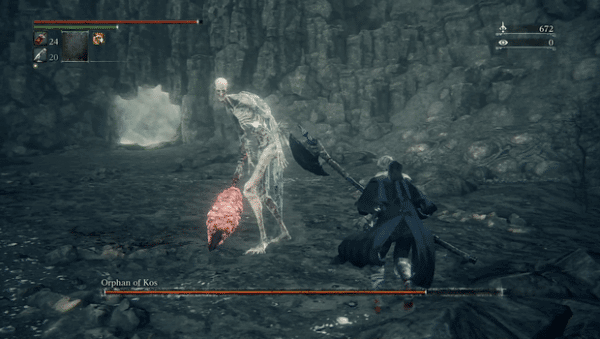 Should you be careful with your windows in the second phase, the Orphan will begin to get even more aggressive in the last throes of this battle, but if you’re at this point in the DLC, you’ve already slain fearsome creatures, and you’ve come so far. Don’t get greedy at this point, and you should be able to whittle the last bit of health away, slaying this fearsome foe. Near Kos’ body, there will be a black shadow, reminiscent of the boss we just defeated, and as you attack it, you’ll put The Hunters Nightmare to rest, having finished the DLC for The Old Hunters. Let the satisfaction wash over you. You earned it.

Bloodborne: The Old Hunters Review – Wonderfully Crafted DLC is Everything Fans Could Want

Bloodborne: The Old Hunters – Guide to Slaying ‘The Living Failures’
Next How ARK: Survival Evolved Finally Hooked Me, Despite How Awful It Looks
Previous No Man’s Sky – A Boundless Space Odyssey That Will Succeed Despite its Doubters