How ARK: Survival Evolved Finally Hooked Me, Despite How Awful It Looks

I’m not usually one to judge a book by its cover, or rather a game by its visuals, but I have to admit; I did that quite hastily with ARK: Survival Evolved. When it first arrived on Xbox One’s Game Preview program, I downloaded it right away to see what all the fuss was about since it’s done incredibly well on PC.

“Wow, this is what all the fuss is about?” was my initial reaction when starting ARK for the first time because it’s, to put it bluntly, hideous to look at. ARK looks terrible, which is probably why I was turned off it quite quickly. From the bland opening menus to the character creator where you can make your character look like it’s right out of a PS2 era game, ARK had everything going against it from the opening moments I started it up.

If you’ve played or even watched the PC version of ARK, the graphical difference is noticeable instantly. That’s not to say the PC version looks amazing, far from it, but the console version is definitely many steps behind. There’s virtually no tutorial, as it took me help from a friend to learn how to even pick up rocks and berries from the ground and nothing else is explained in any way, only adding to the frustration.

Then the bugs start kicking in making things even worse. Performance is hand in hand with how the game looks which adds to the frustration, and don’t even get me started on the game chat text box bug that requires a system hard reset. A large part of the problem is that you’re given such a small window of free game time with the Game Preview to really see what ARK has to offer. If I only went by the short time that was given, I would have given up on ARK a long time ago.

“If you need proof that gameplay is the most important aspect to a game, especially over visuals, look no further than ARK: Survival Evolved.”

So while this may seem like I’m simply bashing the game, but then something interesting started to happen when I had full access to the game and not restricted by the trial time limit; I had a friend show me the ropes and I started to have fun. If you need proof that gameplay is the most important aspect to a game, especially over visuals, look no further than ARK: Survival Evolved.

So what is ARK exactly? Well, if you had to blend DayZ, Minecraft, and Rust, then throw in a helping on dinosaurs, that’s exactly what ARK is. It’s a open end survival game where you’re free to explore or do whatever you like with limits only based on your skill levels and resources. You start with nothing, so you need to craft basic clothing, weapons, and tools. From here you can eventually start to craft basic shelters, campfires to cook the food you hunt, and eventually have the skill to tame the biggest of dinosaurs and use them to travel and fight beside you.

As I mentioned above, I initially wrote the game off since it does very little to teach you what to do, but more importantly, why. It didn’t help that I would wander into a random jungle and get destroyed in seconds by a pack of raptors or bugs. A friend invited to his server where he plays regularly and after reluctantly joining, I found myself logging off for the night about 6 hours later. 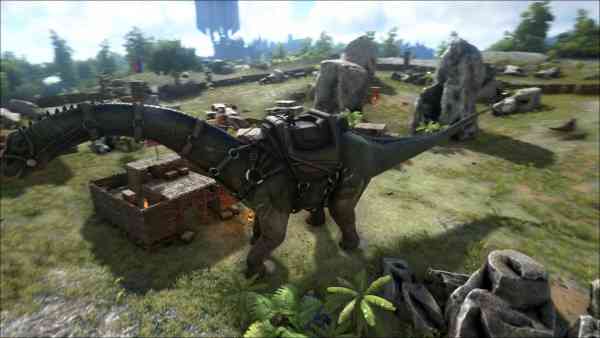 You need to see the latter half of Ark to truly appreciate what it does well, even if it’s hard to look at and frustrates you with its constantly glitches. I got picked up by my buddy, literally, by his pterodactyl and he took me to his clan’s main base. On the flight over I was amazed with how vast the game was, as I kept dying alone in a very small radius from my spawn location and couldn’t fathom how large the game world really was.

Upon landing in clan headquarters I saw dozens and dozens of various dinosaurs, all friendly and tamed, free for clan members to use as they wish. “Wow, that T-Rex is huge” as I hopped onto it with my buddy. I was told we had to go make a meat run, as you need to continuously feed your dinosaurs or they will perish. So we took off on the back of the T-Rex and laid waste to any critters that got in our way.

“So while I initially wasn’t impressed with the opening hour of the game, once I began to see how the game evolves later on, that’s when I started to become really interested with its potential, regardless of how unattractive and buggy it may be.”

This is where things started to get fun. I was getting experience for ‘helping’, leveling up and earning start point increases while learning the finer mechanics of the game itself. Out of nowhere we started getting attacked, but couldn’t tell from what quite yet. It turns out other players were shooting at us with their bow and arrows (as we were on a PvP server), so I hid (as I was still a lower level) as he took care of the bandits. They got away so we went back to base to figure out a game plan.

To put it into perspective, the little shack I built on my own early on was maybe a few feet squared, barely enough room for a bed. Clan HQ was massive, had turrets protecting the walls, filled with crafting stations, multiple buildings with stairs and hallways, and more. You can essentially built anything you can think of, much like Minecraft, and my clan has dedicated builders that specialize in that. My little shack was an embarrassment to this grand base of operations and I’m still learning what everything can do inside the walls.

We then needed to do a metal run, as someone needed a certain type to craft something, so off we went, this time on a crafted boat, to an island that is known for a specific type of metal. Upon landing we starting our surveying, but quickly noticed others down the beach were scouting us and seeing what we were doing. If you’ve played DayZ before, you’re aware how interacting with other players on a PvP focused server could potentially be. Us and the other group of players ran towards each other, both sides somewhat hesitant because you never know if someone is going to kill you to steal your things or not. 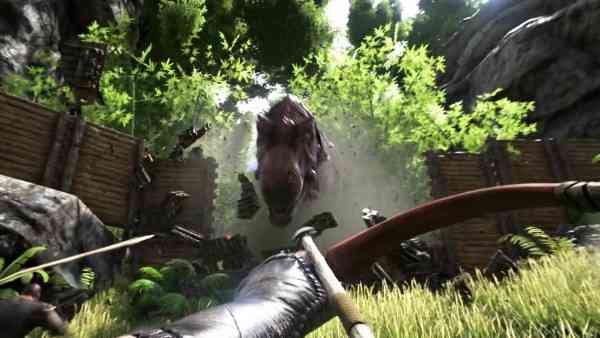 Turns out they were friendly but the problem was that they didn’t speak English well and we didn’t understand Portuguese. Since ARK: Survival Evolved uses proximity voice chat we decided to use google translate to open conversations and introduce ourselves over the mic since they could speak a little bit of English. We eventually started joking with one another via translate, said our goodbyes, and went back to metal mining on this small island. This is where I started to become really hooked. As it was exciting knowing that a simple run in with players like that could have gone a completely different way.

So while I initially wasn’t impressed with the opening hour of the game, once I began to see how the game evolves later on, that’s when I started to become really interested with its potential, regardless of how unattractive and buggy it may be. It’s nowhere near complete or optimized by any means, but it really is fun and addictive once you figure out what you want to accomplish and how.

Despite it being early access and a major lack of polish, I started to have a lot of enjoyment with ARK: Survival Evolved. Sure a big part of it was joining a large clan and not having to struggle  and survive through the lower levels on my own, but now that I’m starting to see large scale player battles and other social aspects to the game, I’ll continue logging on to play. I’m hooked.

Oh, and you poop in this game, as do your dinosaurs. Yup.

Nintendo Carried Amazon Gaming Sales in 2020
Next 10 Games We Would Love to See Get PC Ports
Previous Bloodborne: The Old Hunters – Guide to Slaying the Orphan of Kos