On October 22, 2021, Battlefield 2042 will launch worldwide. This time around, the developers have opted to remove any traditional campaign and focus on what they do best, multiplayer. In doing so, they’ve split their multiplayer component into three distinct multiplayer experiences.

We recently dove into Battlefield 2042’s more traditional multiplayer experience; All-Out War, featuring 128 players and fan-favourite modes Conquest and Breakthrough, playable on seven brand new maps. In the future, Hazard Zone, a brand-new squad based game-type will finally get a full reveal. Today, however, is all about a brand new Battlefield experience that should make many fans incredibly excited. Introducing Battlefield Portal.

Battlefield Portal is nothing we’ve ever seen before in the Battlefield franchise, and yet, it will look and feel all too familiar. This new experience, developed by Ripple Effect Studios, has been internally dubbed a love letter to Battlefield fans. But what exactly is it? Well, that’s up to you.

Essentially, players will have access to a Builder the features a variety of tools that will allow players to customize their very own Battlefield battles. This Builder is broken down into two distinct sections, Settings and Logic. The Settings section is broken down into a whole slew of sub-categories and is designed to be relatively easy to change a vast assortment of options such as modes, maps, and so much more. The Logic setting includes a Logic Editor that is designed to appeal to those who are a bit more ambitious and comfortable with programming. Between the two, fans will be able to create their own distinct Battlefield experiences to play and share with the world.

In Battlefield Portal, you’re given access to 6 iconic maps from 3 of Battlefield’s most beloved games. You’ll get Battle of the Bulge & El Alamein from Battlefield 1942, Valparaiso & Arica Harbour from Bad Company 2, and Caspian Border & Noshahr Canals from Battlefield 3. These maps have been updated with improved visuals and designed to accommodate 128 player battles.

All the assets have been rebuilt with the new Frostbite engine. These maps will look familiar, yet fit in brilliantly with the amazing Battlefield 2042 maps. The Battlefield 1942 levels didn’t feature any sort of level destruction before – that’s been fixed in Battlefield Portal. Players will also have access to the seven brand new Battlefield 2042 maps to tinker with as well. And if that’s not enough, each map has a smaller, “arena”-sized version included as well.

It’s important to note, you can’t actually customize the maps themselves, they are as is. Battlefield Portal does not include any sort of spatial editor. You also won’t be able to customize objectives either – so if you’re customizing a Conquest match, you won’t be able to adjust where the capture points are. 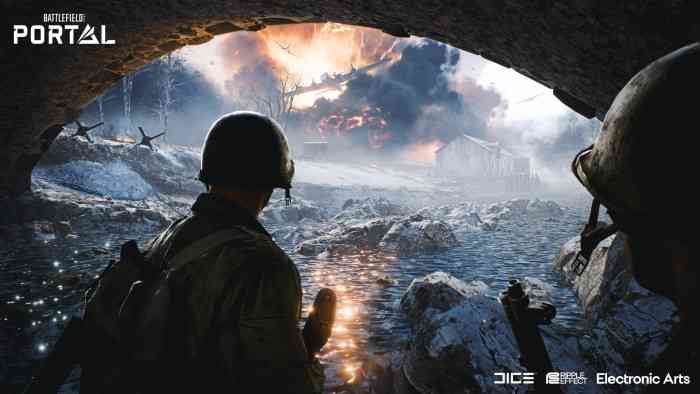 Battlefield Portal gives you access to all the weapons, vehicles, armies and classes/specialists featured in Battlefield 1942, Battlefield Bad Company 2, Battlefield 3, and Battlefield 2042. After you’ve chosen which map you want your battle to take place on, then you’ll move to the Modes where you can choose from a range of game modes, such as Conquest or Rush.

After choosing the game mode, you’ll have a variety of Mode Settings that will allow you to really flesh out your vision. For example, Factions let’s you choose which soldiers or vehicles can compete on your Battlefield. The Mobility setting allows you to toggle player’s abilities such as sprinting or going into prone. The Visibility setting allows you to tweak the User Interface. The Arsenal setting allows you to restrict weapons, Specialists, classes, and vehicles. For example, if you, like me, hate snipers – then you can remove sniper rifles from your Battlefield completely. I love it! Finally, the Scale setting let’s you adjust how many players are on each team. The minimum is 1 per team, so theoretically, you could potentially make a creation pitting you against 127 A.I. or real players, or you and a buddy vs 126 A.I. or real players.

The Team Select option let’s you choose the two Battlefield series that will oppose each other. You could choose to pit Battlefield 1942 vs Battlefield 3, or Bad Company 2 vs Battlefield 2042. Now, I know what you’re thinking – the more futuristic armies will likely have a significant advantage. You’re absolutely right. And when the devs were asked about balancing they simply said that there was no balancing done. Why? Because the point is for players to have fun creating various scenarios. The balancing is completely up to you. Still not sure what to make of this? Well, consider this – maybe those Battlefield 1942 weapons have a slower rate of fire, but you could tweak their damage to be more powerful than Battlefield 2042 weapons. It’s your Battlefield, you decide what feels fair to you.

Last, but definitely not least, is the Logic Editor. This provides the user with a programmable-like interface where you can truly dive into the nitty-gritty details. This will be an area where the most dedicated Battlefield fans go to carve out their very own unique modes. It looked incredibly daunting, but fortunately there are already plans in place to provide a variety of tutorials at launch to assist would-be programmers with this section. Keep in mind, Logic Settings are completely optional, and you’ll still have plenty of other options to tweak without having to worry about programming skills. Are there any limits to the Logic Editor? Well, at this point, the devs have yet to reach a limit. They’re not even sure what would happen if the limit was reached (though one speculated that the game would probably just crash – I’m sure these details will be ironed out by launch). 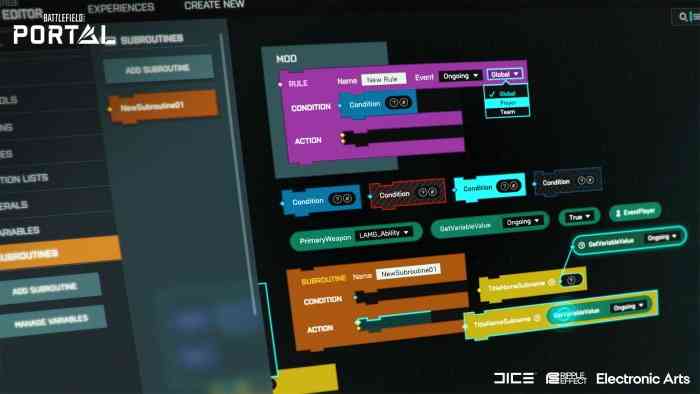 I’m sure you’re mind is swimming with ideas. One dev mentioned that a popular creation at the studio featured 128 player free-for-all with just shotguns – pure mayhem. For me, as a Call of Duty fan too, I’m wondering how close I can turn Battlefield into a Call of Duty-like experience. I’m thinking of using one of the arena sized maps, hardcore on, and no classes. Plus, I’ll eliminate sniper rifles.

What happens if you’re away from your game console and suddenly you come up with a clever Battlefield Portal idea? Well, you’ll be thrilled to know that you can actually log onto the Battlefield Portal website and design your mode from your mobile phone or PC. All you need is an EA account. Fun fact: anyone can create their own Battlefield Portal creation. Of course, you can’t play it unless you actually own Battlefield 2042, but hey, at least you can give the creation tools a test drive. Once you’ve created your masterpiece, you can share it with friends – there are built-in share options so you can easily share to all your social media channels.

It stands to reason that there will likely be millions of creations popping up in short time. The devs intend to use a variety of algorithms, as well as listening to social media channels, to see what’s popular. These popular creations will be given the spotlight on Battlefield Portal, ensuring that fresh new content is always available to try. Who knows – maybe your creation will be spotlighted too! Each creation will also be assigned a variety of tags based on settings you choose – this should make it easier to find creations you’ll enjoy to play.

One of the most incredible decisions devs made with Battlefield 2042 is ensuring that the whole experience feels like a united package. As such, playing matches in Battlefield Portal will transfer XP to the overall Battlefield Progression System, meaning that you’ll continue grinding your Battle Passes and earning rewards. New weapons, maps, and vehicles introduces throughout the various Battlefield seasons will be useable in Battlefield Portal as well. While they wouldn’t confirm if more classic Battlefield maps were coming in the future – I imagine if Battlefield Portal becomes as popular as it should be, then they’ll definitely drop some more classic maps on fans. 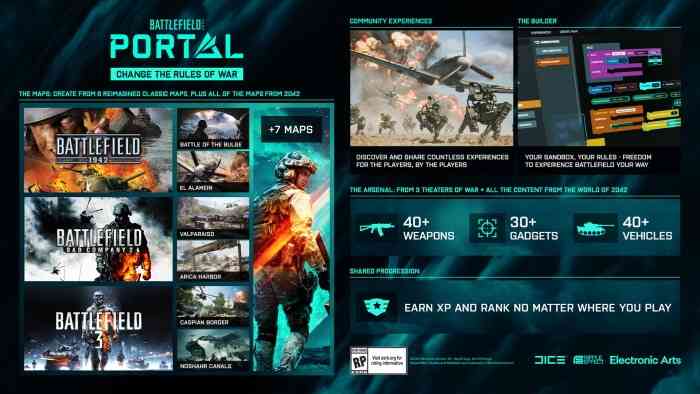 And that concludes are lengthy, in-depth look at Battlefield Portal. After watching the previous footage for Battlefield 2042, I was mildly excited for this new Battlefield game. However, after learning about Battlefield Portal, it’s now right near the top of my most anticipated games of 2021. I truly believe it could be a game changer and that we’ll see some incredible creations from the community. Plus the fact that enjoying these community creations will still provide progression for each season’s Battle Pass is fantastic. I can’t wait to see what more the team at EA DICE has in-store for Battlefield 2042.