5 of the Craziest Moments From Yakuza

The Yakuza game series deals with some pretty serious subject matter — in addition to the gangster politics, the killing, and betrayal, there’s heaping helpings of awesome bloody violence that make this one game series that’s not for the faint of heart. But SEGA has always balanced all the heavy subject matter with plenty of lighthearted moments too. In fact, some of the side-quests, random encounters and other diversions have been so crazy, they’ll stick with you long after the last boss battle is over. Here we’ve selected five of the wackiest, zaniest and even most disturbing moments from the Yakuza series — read on if you dare.

Outside of a karaoke bar, Kiryu encounters a woman named Ayu dressed in leather S&M gear being harassed by street punks. After delivering the usual ass-whooping to them, Kiryu is told that Ayu has lost her dominatrix mojo and needs his help getting it back. Naturally, Kiryu accompanies this person he just met to a public park, with lots of families and children around, and plays the role of an S&M customer, taking Ayu’s physical punishments all while the player picks humiliating things for Ayu to shout at him. Just when you think poor Kiryu can’t sink any lower, this side-quest gets him the reward of a “fur belly warmer.” 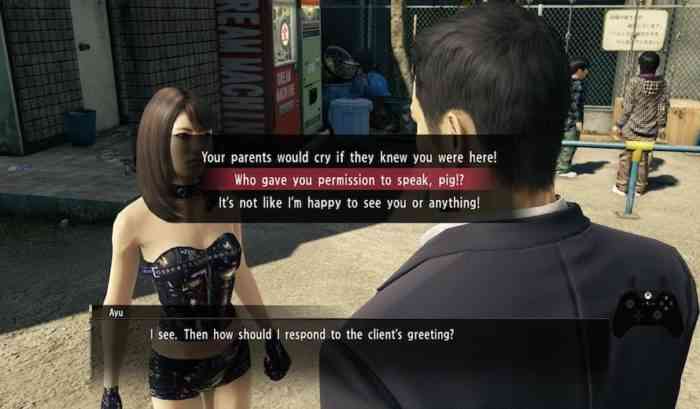 Rising From the Shadows — Yakuza Kiwami 2

In this bizarre nod to scary movies like The Ring, Kiryu is handed a video by a sketchy man who begs him not to watch it. Of course this all but guarantees he will watch it, which he does. In the video, Kiryu sees a park but then a creepy woman’s face jumps up into the scene, scaring the bejesus out of him and also the player. All of this is unsettling enough but then Kiryu is told by a “medium” that he’s now cursed for viewing the video. Great. I won’t spoil the ending, but let’s just say it is never quite explained whether the creepy woman was real or not.

Be My Baby/Baby Don’t Cry — Yakuza Kiwami 2/Yakuza: Like a Dragon

As scary as ghosts are, they’re nothing compared to the truly disturbing images of Be My Baby, quite possibly the craziest side-quest in Yakuza history. Kiryu somehow finds himself in a club that caters to grown men who like to wear diapers and be treated like babies. They want Kiryu to join them, and when he refuses them it turns into a brawl. Trust me, the image of a bunch of grown Yakuza henchmen getting their asses beat while wearing nothing but Pampers is something that will stay with you long after you finish the game, and beyond — because there’s even a “sequel” to this encounter in a side-quest called “Baby Don’t Cry” from Yakuza: Like a Dragon. 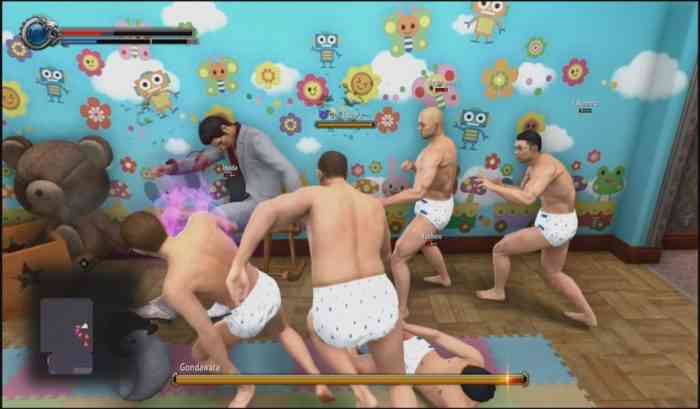 The Girl Who Leapt Through Time — Yakuza 6

Drawing clear “inspiration” from the anime movie of the same name, this weird episode of Yakuza 6 involves Kiryu coming across a young woman who claims to be from the future. You see, she has “possessed” her younger self and thereby traveled back in time. She’s apparently trying to save her father, whom Kiryu conveniently comes across later as he’s being accosted by those ubiquitous street thugs. Of course Kiryu delivers his patented beat-down on the punks and saves the father. Kiryu doesn’t believe the woman’s story of time-travel, but the whole side-quest is still a quirky and odd little sojourn through some cool sci-fi tropes.

If you’ve never heard of ToyLets, they were apparently a series of real-life mini-games in Japan from SEGA that you played while urinating in the bathroom. I’m serious. And two of them were included in the SEGA arcade from Yakuza Kiwami 2: Splash Battle! Milky Nose and The North Wind and the Sun… and Me (I’m still serious). In both games, you control Kiryu’s urine stream using your controller (hold R2 for a stronger blast, naturally), and the premises of both are equally absurd: in Splash Battle! Milky Nose you squirt milk through your nose at an opponent, and in … the other one, you try to blow a woman’s dress off. This might just be the most out-there thing in all the Yakuza games … and that’s saying something.

There you have it — five utterly insane moments from a series that hasn’t ever been afraid to venture into the bizarre side of life. But as wacky as these experiences are, they’re only a small sampling of the many, many examples we could have talked about. So stay tuned right here to COGconnected as we bring you more of the most WTF moments from the Yakuza game series.