Even if you haven’t yet played it you probably know by now that Judgment, despite its title, is a Yakuza game. It’s set in the same fictional red-light district of Kamurocho, it has many of the same gameplay mechanics, and its story involves the Yakuza (even if they are a more secondary factor this time around). Released originally in 2019, Judgment now comes to the latest-gen with Judgment Remastered on the PS5, Xbox Series X and Stadia, with much-improved graphics, a smoother 60 FPS and other upgrades.

For those new to the game, a big difference it has with other Yakuza games is that its protagonist is not an actual member of the Yakuza like Kiryu Kazuma was. Takayuki Yagami is a trained defense lawyer who pays the bills by working as a private detective, but he does have connections to the underworld that figure prominently in the game. Through those connections, he finds himself drawn into a murder mystery that, in true Yakuza fashion, eventually reveals huge conspiracies on the part of governments and powerful secret organizations in Japan.

Judgment also attempts to strike a more serious, realistic tone than its fellow Yakuza titles. While Yakuzas 1-6 certainly dealt with some epic and dramatic events, characters verged on caricature and the narratives could be at times so over-the-top in their grandiosity as to be borderline silly – and let’s be clear: we loved that about them.

Judgment, by contrast, feels more down to earth, starting with its protagonist. Sure, Yagami is still an ass-kicking machine in the game’s signature street brawls, but he is a much more relatable and realistic personality than Kiryu Kazuma. He’s wracked with doubt, he has some big regrets from his past, and he’s more hesitant to get involved in sticky situations than other Yakuza badasses.

Changing Up the Formula

So Judgment is a bit different from other Yakuza games – but is it better? That’s a tough one. The switch to more relatable characters and a more real-world narrative are certainly very welcome. Yakuza is a great series, but having some fresh elements introduced with Judgment feels right. You grow to really know Yagami and understand him as a genuine human much more than you ever could with Kiryu or other previous characters, and that is a good thing.

The story is also definitely worth experiencing. There’s an earnest attempt in this game, more than other Yakuza entries, to make serious comments on big, current societal issues like government corruption, legal injustices, human trafficking, even biomedical ethics. While things might get bogged down at times in dry details and the more mundane aspects such as bureaucratic inefficiency or even land rezoning (yes, you read that right), there’s a heart to the story this time around that kept me interested. 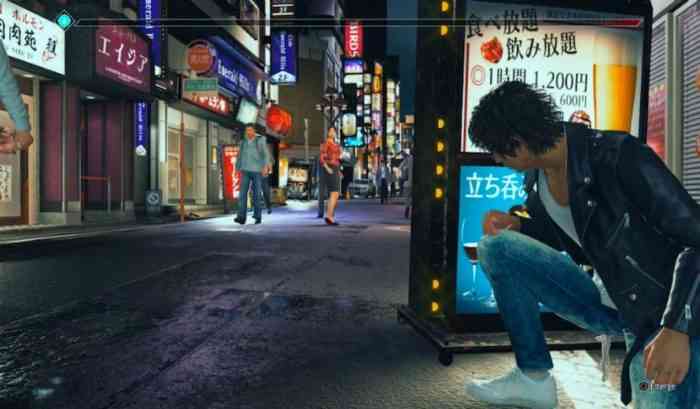 As for Judgment’s new gameplay additions, things are a bit less positive. While I certainly applaud developers Ryu Ga Gotoku for trying to improve a well-established series, the Tailing Missions are frankly, not fun. Slowly walking behind a target character as part of your investigations, you aren’t given much to do other than duck behind designated hiding spots at triggered points along the route. And they go on for what seems like forever. I grew to really loathe these missions after the first couple.

Another less-than-enjoyable addition are the investigation sequences. In theory, this part should be a blast, as you search a crime scene for clues, and maybe even select important clues you might use later. In practice, though, Judgment’s investigations are way too straightforward, and you’re really just panning the camera over a static scene until a clue “pops up.” Once you “find” all of the clues by pressing X on them, you’re done and the story moves on.

In the somewhat-confusing category, we have a dialogue minigame that tasks you with choosing the “correct order” of questions when you’re interviewing suspects or witnesses as part of Yagami’s investigations, with the reward being a small XP bonus. Again, kudos to the devs for trying new things, but it never felt clear to me what should logically be the correct sequence, so I just went with my gut every time. By luck, I happened to get them “right” most of the time.

In other ways, Judgment delivers much the same open-world experience as its fellow Yakuzas. There’s a big urban playground to explore, with lots of side quests to get distracted by (they’re called “side cases” instead of “substories,” but the idea is the same). You can also do all the usual fun activities like playing video games and visiting clubs, which are an essential part of the Yakuza experience. Arcade-style street combat is also pretty much the same as in other Yakuza games, for better or worse.

What about the PS5 and Xbox Series X upgrade? There’s no doubt that it brings some big improvements to the experience. The graphics are just gorgeous, and Yagami and other Judgment characters look fantastic due not just due to better resolution but also beautiful new lighting effects. But for me, the biggest positive is the reduced load times. As we’ve seen with other PS5/Xbox Series X titles, not having to wait through long load times is revelatory, like getting some of your life back. Most of the time, the improved 60 FPS is great as well – but I must say I still experienced some frame rate dropping a few times in my play-through.

Judgment has its flaws, but it does give you a fresh take on the established Yakuza formula, and the story and characters bring some much-needed realism that sets the game apart. The gameplay additions, while they don’t always hit the mark, at least represent an attempt to keep things interesting. If you haven’t yet played Judgment, this new Remastered version is absolutely the way to play it. Disappointingly, it doesn’t offer any new content, but it does improve on the graphics, frame rate and load times to a degree that vastly improves the experience.

** A PS5 game code was provided by the publisher **


5 of the Most WTF Moments From the Yakuza Game Series

Check Out the Awesome and Crazy Gameplay Lost Judgment Will Offer
Next Dungeon and Gravestone Review – Please Sir, May I Have Another
Previous Returnal Review – Beginning the Cycle of Next Gen Gaming